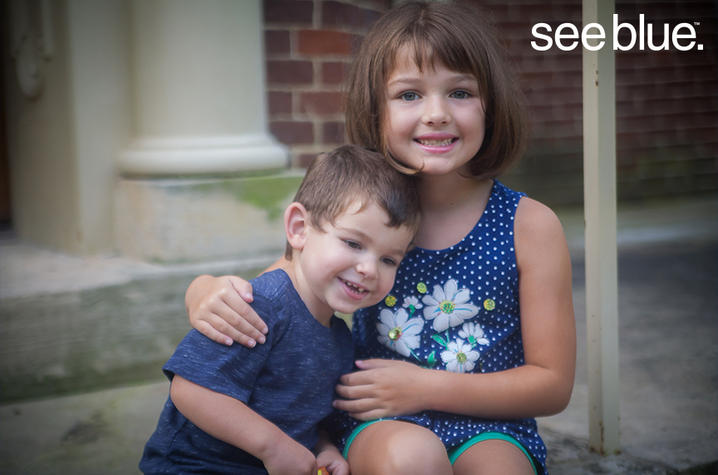 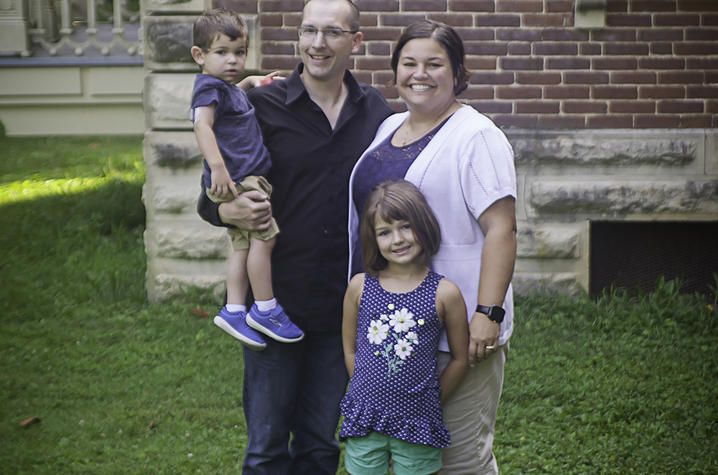 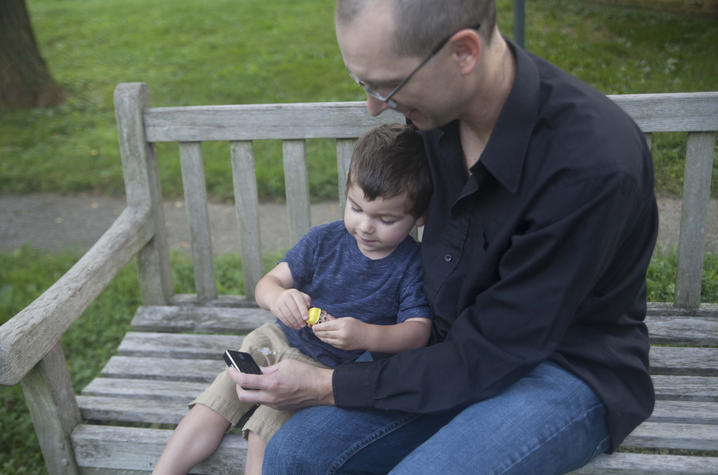 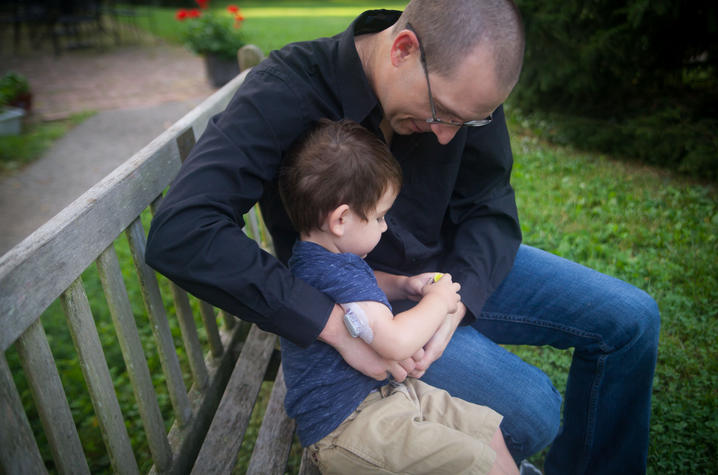 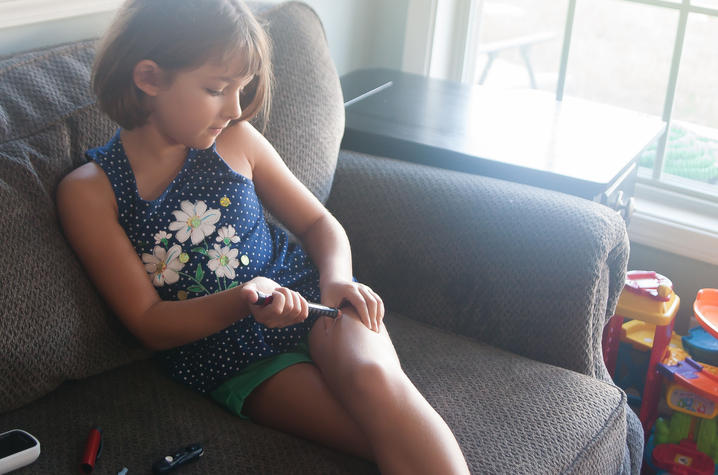 LEXINGTON, Ky. (Aug. 11, 2016) – A natural instinct for parents is to protect their children by keeping them healthy and safe; but what do you do as a parent when not just one, but both your children are diagnosed with a chronic illness like diabetes, as well as your spouse, and all within a relatively short amount of time?

After shaking one young family to their very core, they picked themselves up and took the reins, and now meet the challenge head on, every day, and literally around the clock, with the help of the University of Kentucky's Barnstable Brown Diabetes and Obesity Center.

James and Lisa Middleton look like the couple next door. Lisa, an energetic and personable young woman, received her doctorate degree in Pharmaceutical Sciences from the University of Kentucky College of Pharmacy and later was a research assistant professor in the College of Medicine. She is currently a lecturer at Eastern Kentucky University.  James "JC" Middleton is an avid long-distance cyclist and a software engineer at Valvoline. It was quite a shock when, 12 years ago at age 29, he was diagnosed with diabetes.

JC suddenly dropped 20 pounds from his already slim physique. He was constantly tired, stayed thirsty, and drank more than usual which led to going to the bathroom more frequently, even throughout the night. Weight loss, excessive thirst, and frequent urination are common symptoms of diabetes. Lisa was puzzled by her husband's initial diagnosis of Type 2 diabetes, sometimes referred to as 'adult-onset or non-insulin dependent diabetes,' because he didn't completely fit the profile. Type 2 diabetes typically occurs in older adults and can be aggravated by unhealthy eating habits, inactivity, and obesity. None of these traits describe JC.  Following a visit to the endocrinologist, JC’s diagnosis was changed to Type 1 and that day he began insulin therapy.

Lisa describes her husband as "independent and incredibly smart." He was immediately able to learn carbohydrate counting and quickly did the math to calculate his insulin doses. While the diagnosis presented a huge change in JC's life, she said "he just handled it."

The Middleton's have two children, Kara, a lively and self-confident 7-year-old who loves horses and wants to be a famous singer, and Max, an active and strong willed 2-year-old who likes to run, jump and climb.

About a year ago, the Middleton's noticed something unusual about baby Max. He stopped gaining weight and produced a lot more wet diapers. Late one evening while JC was testing his blood glucose level, on a whim he decided to test Max's glucose level. He couldn't believe his eyes.

"It was off the charts; it simply registered high," he said.

The next day, Max’s pediatrician strongly suspected, that at age 20 months, the Middleton's youngest child had Type 1 diabetes, and their world seemingly turned upside down.

"It crushes you," JC said. "We were all but on the floor crying."

Their pediatrician immediately directed the Middleton's to UK's Kentucky Children's Hospital where Max was hospitalized. The first night, as Max lay sleeping, Lisa took out her smart phone and read everything she could on diabetes, the latest on clinical trials and advances in diabetes research.

Today, Max wears an insulin pump connected to a strap around his waist that delivers constant short-acting insulin through a catheter placed under the skin. The pump offers freedom from multiple injections and can be programmed based on what Max eats throughout the day and his activity level. A continuous glucose monitor, called a Dexcom, is attached to Max's upper arm. This allows JC and Lisa to continuously monitor his glucose levels every 5 minutes, 24-hours a day.  If his glucose level reads too low or too high, the Dexcom will send an alarm to JC's and Lisa's smart phone to warn them, which is especially important throughout the night when everyone is asleep.

"He handles his diabetes like a rockstar," Lisa said. "Once you see your two-year-old handling their diabetes better than you are, you have to get over it and move forward."

About six-weeks ago, while on a family vacation in Lisa's home state of Michigan, Lisa noticed Kara wet the bed during the night and thought she had a possible urinary tract infection.

"I think it was always in the back of my mind that diabetes could also happen to Kara, but honestly, I thought we were in the clear with her. We had one child with diabetes, surely we wouldn't have another," Lisa said. "My mom had some urine test strips and I tested Kara. Her urine was full of sugar."

That day Kara was taken to a hospital in Michigan, was diagnosed, and began treatment for Type 1 diabetes. During that time, the Middleton’s also contacted UK to consult with Max's pediatric endocrinologist, Dr. Alba Morales, associate professor of pediatric endocrinology and Barnstable Brown faculty member; and their primary diabetes educator Angela Hepner, about Kara's treatments.

"They were incredibly helpful, supportive and confirmed treatments," Lisa said. "As soon as we returned home to Kentucky, Kara was seen at Barnstable Brown immediately."

Kara is currently taking four to six shots every day and checking her blood sugar by herself six to 10 times per day. She also will be starting on an insulin pump and Dexcom next week thanks to the quick work of the staff and doctors at Barnstable Brown.

According to the American Diabetes Association, there is a three to five percent chance siblings will develop diabetes. Hepner said they are seeing more sibling sets with diabetes in their clinic and they also have several families where one parent has Type 1.

"Our team is committed to making families like the Middletons have as positive an experience with diabetes as possible," Hepner said. "For our younger children, we focus our educational efforts toward the parents, and also emphasize to the kids that diabetes should never stop them from doing what they love."

Morales says it is a huge challenge to manage children with diabetes because they are changing and growing on a daily basis and their management has to evolve with them.

"The mother has been wonderful in the way she manages her children's diabetes on a daily basis. It is more difficult than anyone can imagine," Morales said. "She is really good at keeping us informed here so that we can all work as a team."

While the Middletons say they are fortunate because both their children were diagnosed early before they got extremely sick, their biggest challenge is managing their worry.

"Like all parents, we want the best for our children and want them to lead as normal a life as possible, and a diagnosis of diabetes is just a detour in the road," JC said.

"I try not to blame myself for my kids' diabetes because in all likelihood, I passed it on to them. There are so many potential things that may cause diabetes, you can't blame it all on genetics."

Morales says that the reason there is no cure for diabetes yet is because they don't have all the answers to what causes the disease.

"It's a combination of factors and genetics is only one. We believe there are undiscovered environmental factors as well," she said. "Diabetes is impossible to predict in children, even if both parents have diabetes."

Lisa said JC knows the seriousness of the disease and is involved in every aspect of their children's care, but as the mother and the only non-diabetic in the family, she worries about them all.

"I worry whose blood sugar is up and whose is down. I have to keep track of checking glucose levels and who ate what and when and if they got their insulin. Now that Kara is in the mix, it's even more worrisome. I have to work every day to keep my family alive,” she said.  “Worrying can consume all of the energy I have that I could be putting somewhere else; so I have to push nervousness to the back of my mind and focus.”

"Diabetes is an invisible disease. My kids are not obviously diabetic. They are normal and active. We can easily hide the monitors and pumps with clothes but the seriousness of the disease is always present."

JC adds, "there is light at the end of the tunnel. You can live a normal healthy life with diabetes.  Hopefully our children will see a cure for Type 1 Diabetes in their lifetime."

Dr. John Fowlkes, director of the Barnstable Brown Diabetes and Obesity Center, said the clinical team at Barnstable Brown is about much more than just seeing patients and prescribing treatment.

"Diabetes doesn't just impact the individual, it can potentially impact the entire family whether there is one diabetic or several. We strive to educate our patients on how to live a full and healthy life with diabetes, and serve as a medical home that addresses all their needs.