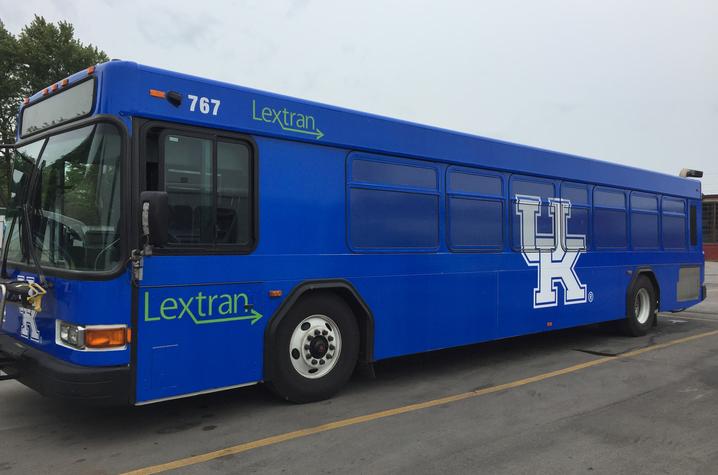 LEXINGTON, Ky. (Aug. 23, 2016) — The campus and city bus systems are a quick, convenient way for members of the University of Kentucky community to navigate their way to, from and around campus. As fall semester begins later this week, UK Parking and Transportation Services (PTS) is reminding students, faculty and staff of the variety of free transit options available to them.

After the Night Route service concludes for the evening, the On-Demand Night Bus provides on-campus transportation. Riders may call (859) 221-RIDE (7433) to make a pick-up request between the hours of midnight and 5 a.m. Monday through Friday, and from 7 p.m. to midnight on Sunday. Calls must be received at least 30 minutes prior to the end of service.

The Orange Route (formerly known as the Purple Route) and the Pink Route (Kentucky Clinic Shuttle) provide ride options for students and employees whose destinations are in the UK HealthCare sector of campus. The Orange Route operates from 5 a.m. to midnight, Monday through Friday, while the Pink Route provides weekday shuttles during the peak arrival and departure times of 6:45 a.m. to 9 a.m. and 4 p.m. to 7 p.m.

Campus buses can be tracked in real time using the TransLoc Rider app on iPhone and Android devices allowing for users to plan for delays caused by traffic, accidents or inclement weather. TransLoc is a GPS-based tracking system that tracks all campus buses as well as the Red Mile Route (Lextran 15) frequently used by the campus community. Users should be sure to select both Lextran and the University of Kentucky under Current Transit Systems in order to include the Blue, White and Green Routes and Route 15 data on the app.

The free mass transit options are not restricted to campus. Last spring, Parking and Transportation Services announced an extension of the BluPass partnership with Lextran, which allows students, faculty and staff to ride any Lextran route free of charge when showing their Wildcard ID. The popular program resulted in more than 650,000 trips during the first nine months of BluPass service. The BluPass agreement has been extended through June 2019.