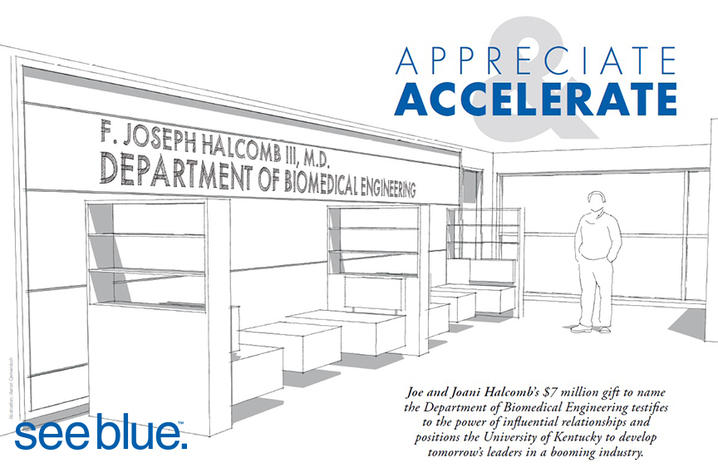 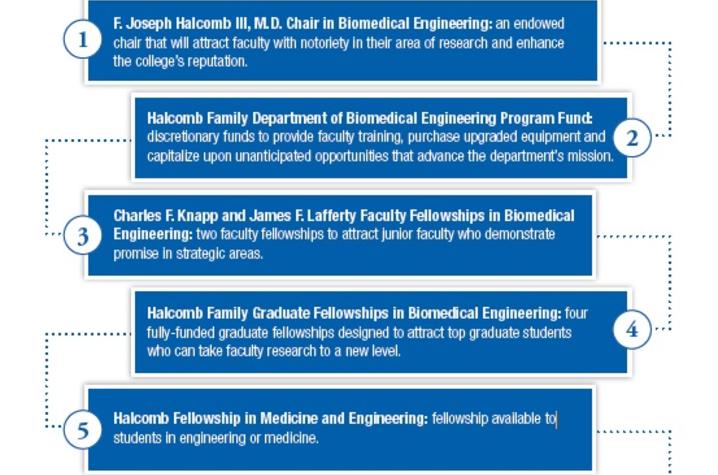 LEXINGTON, Ky. (April 18, 2016) — University of Kentucky College of Engineering Dean John Walz, along with President Eli Capilouto and others, today announced a $7 million gift from UK alumnus F. Joseph Halcomb and wife Joani Halcomb to rename and transform the Department of Biomedical Engineering.

Pending approval from University Senate and the Board of Trustees, the F. Joseph Halcomb III, M.D. Department of Biomedical Engineering will be the first named department in the College of Engineering and at the University of Kentucky. The impact upon a program that has only existed for 30 years is seismic. Established in 1985, the Center for Biomedical Engineering resided within the Graduate School before joining the college in 2010. In 2013, it became an official department.

Now, the Halcombs’ $7 million naming gift will add one endowed chair and two endowed fellowships to a faculty of eight — a 27 percent increase. Additionally, the Halcomb Family Graduate Fellowships in Biomedical Engineering will add fully-funded graduate fellowships to attract top graduate students and support their research. Dean John Walz said this first of its kind gift taps into one of the hottest engineering growth areas available to graduates.

“Engineering technology has been responsible for huge advances in modern medicine," Walz said. "From implanted devices to prosthetics to regenerative tissue, biomedical engineers improve the well-being of those with significant health care needs. The Halcombs’ naming gift will ensure we provide the best education and training opportunities available to the students in this flourishing program.”

After 30 prosperous years in the medical device and biotechnology industries, Joe knows the demands facing today’s graduates and what is required in order to succeed. By the mid-1980s — after earning his mechanical engineering degree in 1974 and his MD degree in 1978 from UK — he was vice president for product development for Zimmer’s Orthopedic Implant Division, leading the development of joint replacement implants that revolutionized the industry. In the early 1990s, he was senior vice president of operations and later president at Zimmer’s Hall Surgical Division, the world’s leading supplier of powered surgical instruments. He later joined Amgen, a biotechnology pioneer, and helped launch three new products with breakaway potential, generating incremental revenue and expanding Amgen’s reach to millions of patients around the world. Joe’s success and extensive knowledge of the industry give him a unique perspective on the potential of the Department of Biomedical Engineering.

“There are only seven or eight schools in the U.S. where medicine, engineering, pharmacy, dentistry and a first-rate hospital are within walking distance of each other and UK is one of them,” he explains. “The possibilities for interdisciplinary research connected to biomedical engineering are unbelievable. There’s no excuse for not collaborating!”

Joe was inducted into the College of Engineering’s Hall of Distinction in 2014. The honor is reserved for engineering alumni who have demonstrated distinguished professional accomplishments, outstanding character and commitment to community service; yet Joe credits his success to the generosity and encouragement of others.

“When I reflect on my life experiences, I see that a number of people — my wife and family, my parents and sisters, my fraternity brothers, the engineering faculty at UK, managers who opened doors for me and numerous others — touched me and made it possible to be where I am today,” he said humbly. “They are the reason why I can even consider giving something back.”

“I have at times reminded Dr. Knapp of stories he shared in class and he’ll laugh and say he doesn’t remember telling them; but I remember. I couldn’t get enough,” Joe reminisced. “Faculty members should never let go of the possibility that they are making a tremendous impact on their students. He didn’t know it at the time, but he was speaking on my frequency.”

As much as past friends and mentors factor into the Halcombs’ naming gift, Joe also points to present relationships. He serves on the College of Engineering’s Dean’s Advisory Council and supports the college’s goal to make UK a top 50 college of engineering. When it comes to UK President Eli Capilouto, Joe speaks with emotional depth.

“I had not known President Capilouto for a long time, but when my dad passed away, he drove to Scottsville, Kentucky, for the funeral. Now and then he calls to see how I am doing. He doesn’t have to do those things; he does them because that’s just who he is. The university has a secret weapon and he’s not on the basketball team,” Joe joked. “His name is Eli Capilouto.”

“Joe speaks eloquently of how his life was changed by the generosity and mentorship of others. Through his gift, he is having the same impact on the UK family,” President Capilouto said. “His support for the College of Engineering and the biomedical engineering department is not about today, it’s about tomorrow — it’s about the future students, faculty and staff served by his philanthropy and the lasting impact they will make on the people they serve across the Commonwealth.”

If Joe has one predominant hope for this naming gift it is that patients will be served. His father, a rural Southern Kentucky physician, brought his young son on his rounds. As Joe envisions it, the naming gift will serve the very students and faculty whose innovations will improve the lives of patients in Kentucky and beyond.

“What I want to see more than anything else is that students in the biomedical engineering program make a difference in patients’ lives," he said. "It would thrill me if their advances in research lead to the development of products with clinical applications. Think of the impact: students get a head start on their careers, people with debilitating medical issues are helped and UK enlarges its reputation within the biomedical engineering industry. My mission is to give back from what I have been given and I believe this gift will accelerate the program in ways that will multiply over many decades and lifetimes.”