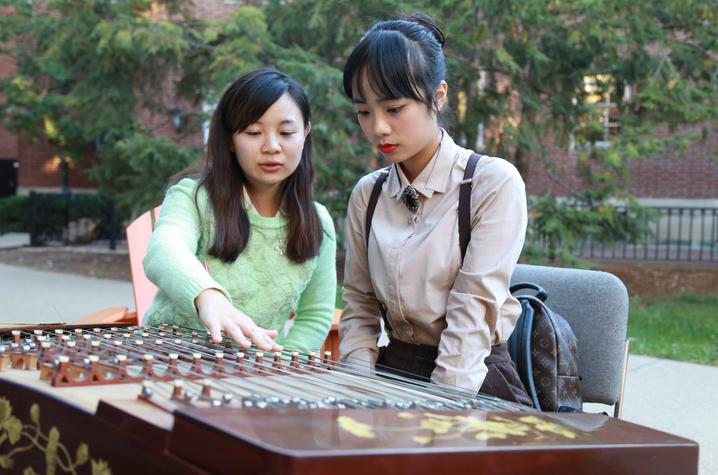 Chinese dulcimer, also known as yangqin, is a Chinese hammered instrument originated in Persia and brought to China in the 17th century. “Yang” in English means “acclaimed.” There are many different kinds of hammered dulcimers and they are popular in China, Eastern Europe and the Middle East.

Yangqin is made of a trapezoidal wooden resonance box and different sets of strings. It has the role of a piano in Western music and can be used in solos or accompanied with other music instruments in ensembles or in Chinese traditional opera.

Siyu Li, UKCI’s new addition to its specialist team, is a very talented musician. She has performed in nine countries around the world including United States, Britain, France, Russia, Ireland, Bahrain, Jordan, Georgia and Armenia. She has been engaged in the musical education field since 2010 and currently teaches yangqin at University of Kentucky.

“I have played yangqin since I was six,” Li said. “When my mother took me to the Palace of Culture, we heard a melodious instrument that we had never heard before. Then, my mother and I started to search for this beautiful sound in this building. We found a man practicing this amazing instrument. My mother started to chat with the musician and I started to study it immediately. Yangqin brings a lot of happiness to me and I enjoy playing it on stage.”

Besides yangqin, UK students can enroll in other UKCI culture courses including martial arts, tai chi, Chinese painting, Chinese calligraphy and guzheng, commonly known as Chinese zither. For more information about UKCI’s courses and how to enroll visit www.uky.edu/international/UKCI/Courses_and_Testing.

A gateway for Chinese language, culture and art to the people of Kentucky, UK Confucius Institute provides leadership, support and coordination for Chinese language and programs in K-12 schools as well as on UK's campus; assists and facilitates establishing and maintaining faculty and student exchanges between UK colleges and Chinese universities; conducts Chinese language and cultural exchange; and promotes education about China on campus, across the Bluegrass region, and throughout the Commonwealth. To keep up with UK Confucius Institute and future events, join the institute's listerv and follow them on Facebook, Twitter and Snapchat (UKConfucius).