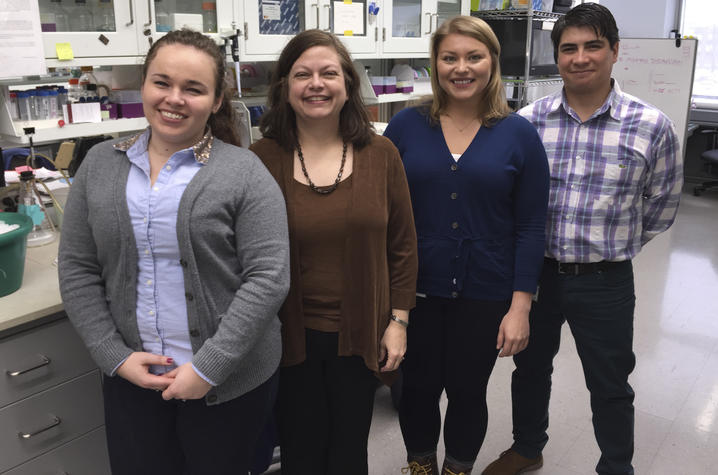 This video was produced by Alicia Gregory and Chad Rumford of REVEAL multimedia.

LEXINGTON, Ky. (Feb. 22, 2016) — From Zika to Ebola, the emerging viruses of the 21st century pose a threat to populations throughout the world as silent invaders of the human body. While viruses infect most people multiple times a year with varying degrees of severity and symptoms, no two viruses function in exactly the same way.

For University of Kentucky virologist Becky Dutch, studying the diverse nature of viruses is an exciting — and sometimes challenging — endeavor. Each individual virus must be treated as a separate entity. Dutch said the details of the infection process of HIV do not necessarily teach researchers about the details of infection processes of other viruses, such as a common respiratory virus. In the process of describing the individual traits and functions of viruses, Dutch gains an insight into how the human body puts up its natural defense mechanisms as well.

“When you study (viruses) you learn about an important infection process, but you also learn about how we function, and to me, that’s a great synergy,” Dutch said.

A professor of molecular and cellular biochemistry at the UK College of Medicine, Dutch works to decode the infection processes of dangerous viral pathogens in an effort to understand viral behaviors and test potential therapies to inhibit the viral takeover. Her research group focuses on how the proteins within a virus function and interact with human cells. When she first came to UK, Dutch investigated viral proteins from the level-four biohazards Hendra and Nipah, the virus that inspired the global pandemic portrayed in the movie Contagion. Hendra and Nipah have no intervention options and are zoonotic, which means they infect both animals and humans. Dutch’s group discovered a novel process for activating a key protein in these viruses.

Today Dutch’s lab also investigates human metapneumovirus (HMPV), a recently identified pathogen that is frequently responsible for viral pneumonia in children and older adults. Her group studies HMPV infection in both cell culture systems and in models of the human respiratory tract. Dutch said replicating their tests in human models allows the researchers to observe the real interaction between virus and cell that takes place within the human body, giving strength to their findings.

Dutch believes the emergence of the Zika virus has raised public awareness of mosquito-borne pathogens, but Zika won’t be the last virus to cause a public health emergency. Dutch emphasized the importance of research to investigate the effects and behaviors of a dangerous pathogen before an epidemic strikes. Her research has contributed to the development of therapies and anti-viral inhibitors that represent new ways combat viruses.

“If you go back to the 1970s, the Surgeon General of the U.S. thought we would conquer infectious diseases in his lifetime,” Dutch said. “And I think the AIDS epidemic, and then these continuing new emerging diseases, are proving that that’s completely wrong.”