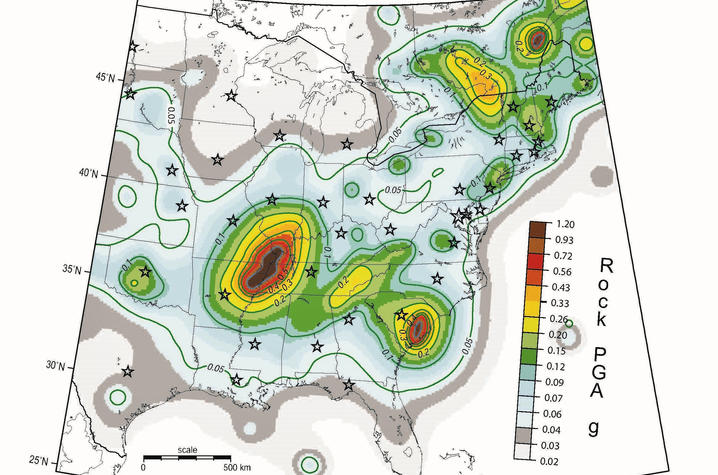 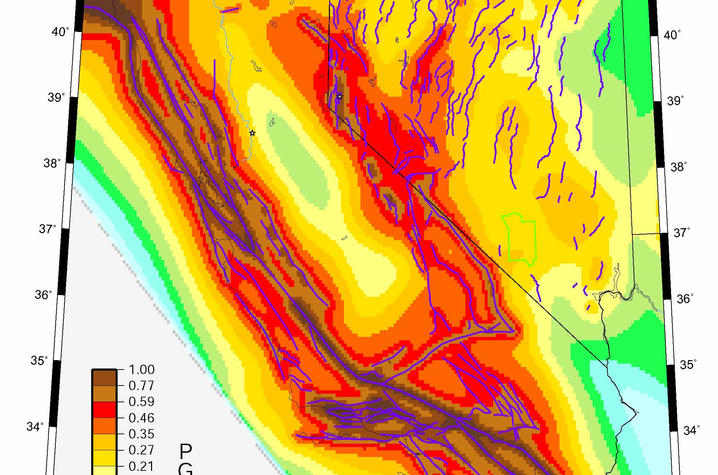 LEXINGTON, Ky. (Oct. 31, 2016) — A new publication from the Kentucky Geological Survey at the University of Kentucky concludes that the national earthquake hazard maps developed by the U.S. Geological Survey seriously overstate the hazard in the New Madrid Seismic Zone, which includes western Kentucky, resulting in overly stringent building codes and policies.

Research that resulted in the publication also suggests that economic development is reduced and insurance costs are unnecessarily higher in western Kentucky because of the overstated hazard. The publication, “Earthquake Hazard Mitigation in the New Madrid Seismic Zone: Science and Public Policy,” is available at the KGS publications website here. The publication was developed from the master’s degree thesis of principal author Alice M. Orton.

The study points out that, with very few damaging earthquakes in the New Madrid Seismic Zone, assessing the zone’s actual earthquake hazard is difficult. In such cases, mathematical earthquake models based on the San Andreas Fault and other western U.S. seismic zones have been developed to calculate seismic hazard in the New Madrid region. Geologic differences between the western United States and the central part of the country limit the applicability of western U.S. data to the central United States. This leads the study’s authors to conclude that the application of the most commonly used mathematical model to determine the hazard in the central United States, probabilistic seismic hazard analysis, is flawed and its results misinterpreted and misused for public policy decisions. The authors point out that large uncertainty is inherent in earthquake hazard assessment for regions like the central United States.

The 2008 USGS seismic hazard maps, which are the basis of building codes and other policies, depict higher earthquake ground-motion hazards for the New Madrid Zone than in San Francisco or Los Angeles, even though the California coast has been affected far more frequently and seriously by seismic activity than the central United States has been.

“At each step in this process (using the hazard maps to develop public policies), any uncertainties in the underlying calculations were accepted, compounded and codified as mitigation requirements,” the study concludes. “Government officials, economic development agencies and businesspersons in the Jackson Purchase Region of Western Kentucky have complained that overly stringent seismic mitigation policies adversely affect economic development in the region by discouraging new businesses from locating in the area.”

As part of the study, 29 officials, professionals and other private citizens were interviewed to assess understanding and attitudes about the earthquake threat in Western Kentucky as well as computerized scenarios of economic and other effects from earthquakes in the New Madrid Seismic Zone. The New Madrid area was also compared to the affected area of the Wenchuan, China, 7.9-magnitude earthquake of May 2008, because earthquake ground-motion values are similar in both areas.

The study concludes, “Whether justified or not, the predicted extreme high ground-motion hazards for the New Madrid Seismic Zone and the resulting stringent seismic design requirements have an impact on communities in the New Madrid area, Western Kentucky in particular. The perception in Western Kentucky is that overstated seismic-hazard estimates have led to overly stringent building codes and other detrimental public policies, ultimately suppressing economic growth.”

Among the recommendations of the study:

· Improve the level of trust between the public and seismic experts through more transparent communication and more understandable documentation of information and methods.

· Provide additional education for nonscientists and structural design and construction professionals, as well as help with appropriate emergency response plans and preparation activities.

The Kentucky Geological Survey is a research institute within the University of Kentucky. KGS staff work to increase the understanding of the state’s geology and disseminate their research results to the citizens, communities, State agencies, businesses and industries of Kentucky.