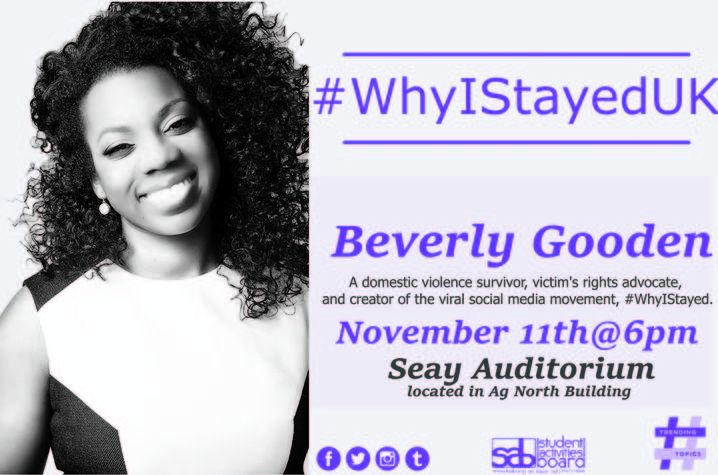 Domestic violence survivor, speaker and victims' rights advocate Bev Gooden has appeared in numerous news outlets and talk shows such as "Good Morning America," the "Today" Show, The Washington Post, NPR, "Dr. Phil," TIME Magazine and many more discussing the #WhyIStayed movement and her work as an educator on relationship abuse.

“Beverly speaks about domestic violence sensitivity, victim shaming, the culture of violence, religious responses to domestic violence and women's empowerment,” stated David Kinstley, SAB director of engaging issues. “She also speaks about the power of storytelling, online advocacy/activism and sharing in the digital space. I believe she is an excellent addition to the #TrendingTopics series.”

Engaging Issues uses #TrendingTopics to give students an outlet to voice their opinions on relevant and often times controversial topics. As the discussion of relationship abuse and violence is becoming more relevant in today’s society, it is imperative that students receive the most effective resources and tools to utilize when standing against domestic violence or intervening as a bystander if necessary. This event will allow attendees to hear Gooden's personal experience through interactive components such as video clips and utilize a Tweet wall in order to express their opinions, thoughts, and questions while aiding in the advancement of a safer and more informed campus community.

SAB brings more than 60 entertaining, educational and enriching programs that are reflective of contemporary issues and trends to the University of Kentucky annually. These programs are designed to enhance the college experience for students, faculty, staff, and the greater Lexington community. Connect with SAB at http://www.uksab.org, follow them on Twitter at http://twitter.com/UKSAB, or like them on Facebook at http://www.facebook.com/UKSAB/. For more information about SAB and events, email publicrelations@uksab.org.