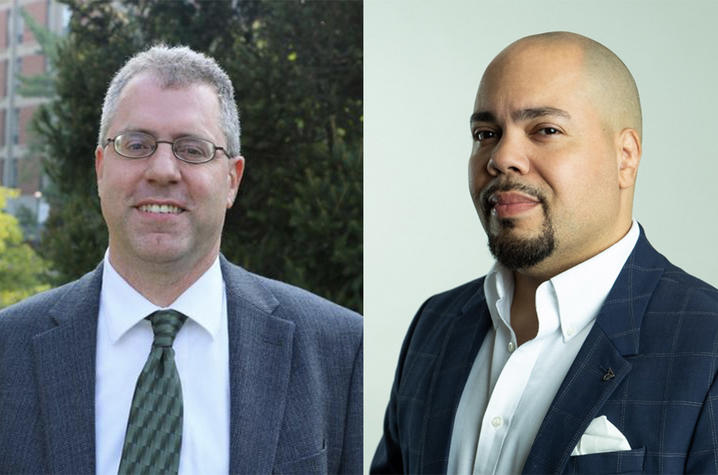 LEXINGTON, Ky. (Jan. 29, 2020) — University of Kentucky College of Education Dean Julian Vasquez Heilig and Martin School of Public Policy and Administration Director and Professor Ron Zimmer have once again been ranked among the top public influencers shaping educational practice and policy in the U.S.

The Rick Hess Straight Up Edu-Scholar Public Influence Rankings, published annually by the American Enterprise Institute, captures Vasquez Heilig’s and Zimmer’s passion for creating public conversations around education-focused issues. About 20,000 U.S. scholars could be considered, but only 200 are chosen. The ranking takes into account factors that demonstrate public influence such as the citations of research, being quoted or mentioned in the press, web mentions and being followed and retweeted on Twitter.

“The majority of Americans have a personal stake, or at least a general interest in our educational systems, and seeing improvements in quality. But, not everyone has a deep background in the research behind it. Producing quality research on educational issues is important, but journal articles can be cumbersome and difficult to quickly interpret. It’s our role, as academics, to ensure we are reaching the people who are impacted by educational practices, but don’t necessarily work in research,” Vasquez Heilig said.

Vasquez Heilig came to UK last year from Sacramento State University. In his first year as dean of the UK College of Education, he has praised the work of students, faculty and staff, noting their engagement in community issues and focus on being relevant and impactful in addressing state and local needs through research and service.

Vasquez Heilig’s efforts to shape public discussion are cataloged in his Cloaking Inequity blog, read by more than one million people. His work, largely focused on equity and inclusion in education, has been cited by The New York Times, The Washington Post, Associated Press, USA Today, Education Week, Huffington Post and other print and electronic media outlets. He has also appeared to discuss his research on local and national radio and TV including PBS, NBC, NPR, Univision and MSNBC. Notably, Harvard’s Education Next magazine once named him as one of the top 10 education policy voices — the #2 ranked professor in the US.

Zimmer has been included in every previous ranking conducted by Education Week. He is an alumnus of the Martin School and has been director since 2016.

“Because schools are so important to one’s future, it is important to evaluate what are effective education policies for improving the quality of education. This drives my passion to do research in this area,” Zimmer said.

Zimmer currently leads a study funded by the Walton Family Foundation and the Laura and John Arnold Foundation which is evaluating the state of Tennessee’s Achievement School District, a school system tasked with raising the performance of lower performing schools. He is also a co-principal investigator on an Institute of Education Sciences grant examining school choice programs in Indiana.

His research has resulted in a multitude of scholarly articles, book chapters and monographs. Many of his research findings have been featured in major media outlets including Education Week, ABC News, CNN, The New York Times, Los Angeles Times and U.S. News and World Report.