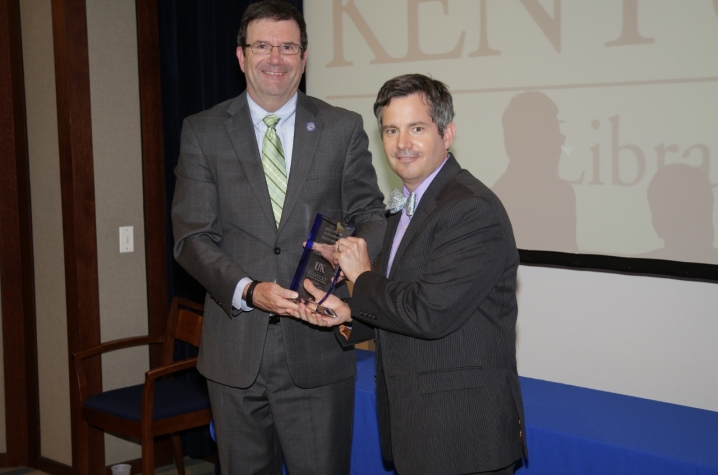 LEXINGTON, Ky. (June 1, 2015) — Doug A. Boyd, director of the Louie B. Nunn Center for Oral History in the University of Kentucky Libraries Special Collections Research Center, is the recipient of the 2015 Paul A. Willis Award for Outstanding Faculty. The award, given by UK Libraries, honors the legacy of former director Paul A. Willis by recognizing one member of the libraries faculty each year. Boyd received the award at the UK Libraries Spring Gala earlier this month.

Since becoming the director of the Louie B. Nunn Center for Oral History in 2008, Boyd has overseen the addition of more than 2,500 new oral history interviews to the Nunn Center’s collection. He led the team that developed OHMS (the Oral History Metadata Synchronizer), an innovative tool to enhance access to online oral history. Boyd created an oral history partnership with the bourbon industry in Kentucky, raising funds for the Kentucky Bourbon Tales oral history project, and produced the award-winning documentary “Quest for the Perfect Bourbon.”

Boyd launched SPOKEdb, the Nunn Center’s online catalog, which garners more than 10,000 page views per month. He works with WUKY public radio on the regular feature “Saving Stories,” and wrote the book "Crawfish Bottom: Recovering a Lost Kentucky Community," published by University Press of Kentucky in 2009. He edited another book, "Oral History and Digital Humanities: Voice, Access, and Engagement," published by Macmillan in 2014. Boyd is also the author of numerous scholarly articles, and regularly presents on oral history topics at national and international conferences.

Under Boyd’s guidance, the Nunn Center expanded the project "From Combat to Kentucky" to include interviews from student veterans at Eastern Kentucky University, Bluegrass Community and Technical College, and Northern Kentucky University, in addition to UK. The project inspired a play that ran off-Broadway as part of the NYC Fringe Festival in 2011, and completed a statewide tour to state universities in Kentucky. "From Combat to Kentucky" is now integrated into a veteran transition course that engages student veterans with archival materials, as well as interviewing each other about their powerful experiences serving in the Iraq and Afghanistan wars and their transitions back into civilian and student life.

"Dr. Boyd is recognized internationally as a scholar who excels at collecting, interpreting and publishing oral histories; he also has the digital expertise to make oral histories available to researchers in new ways. His work represents the future of oral history. Further his contribution to UK Libraries advances our mission to serve the UK community as well as scholars around the world,” said Terry Birdwhistell, dean of UK Libraries.

UK Libraries solicits candidates for the Willis Award each fall. Any member of the UK Libraries faculty and staff may submit a letter nominating a member of the faculty for this recognition. The award recipient is selected based on achievements in their primary assignment, as well as national leadership, scholarship, teaching, creativity, innovation, and service. The final determination of the award winner is made by the UK Libraries National Advisory Board.