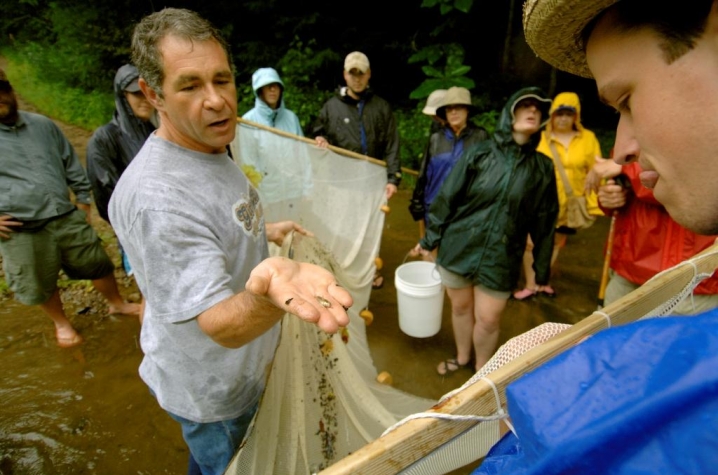 LEXINGTON, Ky. (July 19, 2011) — A University of Kentucky biology professor known for his creativity in the classroom has recently been awarded for his storytelling.

The award honors a four-year college or university faculty member who demonstrates creativity and innovation in teaching. Krupa's lesson on the ivory-billed woodpecker was considered by the awards committee to be particularly useful in covering evolution with non-biology majors.

"This award from fellow biology educators is a testament to the quality of instruction Dr. Krupa is inclined to give," said Vincent Cassone, chair of UK's Department of Biology. "He challenges students’ sensibilities and predispositions often, particularly when it involves evidence for evolution, biodiversity and public policy, and sometimes students don’t like it. However, this is what a university education is all about — to challenge peoples’ preconceived notions; and this is what we cherish in the Department of Biology."

Since 1995, Krupa has taught 23,000 students, 15 different biology classes and 89 class sections at UK ranging from Urban Ecology and Ornithology, to Evolution and Marine Biology.

Most semesters, he teaches five to six sections of introductory, non-majors biology (basic biology and human ecology), with class size ranging from 260 to 500 students.

"Recalling Socrates' advice that 'education is the kindling of a flame, not the filling of a vessel,' and mindful that my class is often the last chance to convince these students that biology (and science, for that matter), is exciting, I search constantly for ways to light that flame," Krupa said. "Story-telling is one of the most powerful teaching tools we can use, yet there is little discussion among teachers on how to improve story-telling skills."

In teaching Darwinian foundations of evolution and the scientific method to his students, there are few stories that Krupa is more passionate about than the ivory-billed woodpecker.

"The ivory-bill example is typical of my approach to lead with a story that grabs the attention of students before shifting into the concepts. I tell students the story of the ivory-bill from my perspective," Krupa said. "From my experiences as a child in the Golden Guide to Birds, to my work as a biologist, roaming the swamps, always listening and looking for this bird, I am intentionally planting both the bird's intrinsic glamour and my own personal stake in the minds of my students."

Following the captivating, personal story, Krupa typically introduces the biological basics of the woodpecker genus Campephilus to which the ivory-bill and its 10 sister species belong, followed by class questions that promote critical thinking.

"Conveying passion and enthusiasm in a subject is something every teacher must accomplish," Krupa said. "One of the ways to do this is through the art of story-telling."

Krupa's research, which typically involves mammal ecology at UK's 11,000-acre Robinson Forest, has included flying squirrel ecology; the impact of fire on small mammals such as the white-footed mouse; the abundance, distribution and ecology of the Allegheny woodrat; field and lab experiments on carnivorous plants; and the competition between carnivorous plants and animal predators.

Krupa will receive his latest award at the October meeting of NABT in Anaheim, Calif.