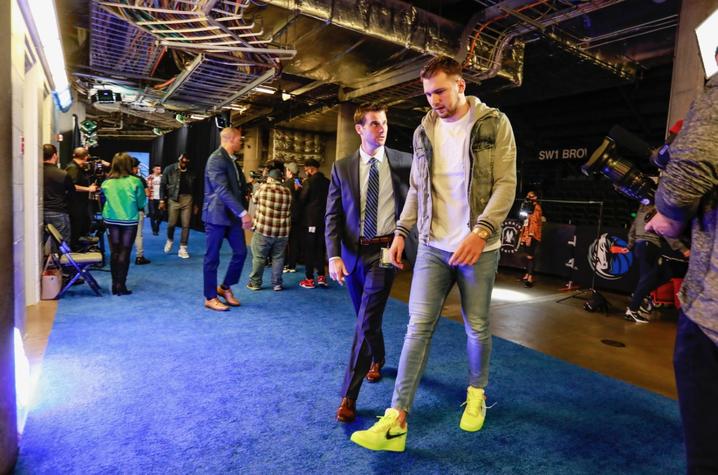 LEXINGTON, Ky. (April 12, 2022) — Although his first love was football, one University of Kentucky College of Communication and Information alumnus has turned his second love, basketball, into a nearly 20-year career.

Scott Tomlin, a 2002 communication graduate, joined the Dallas Mavericks just two years after graduating from UK and has been with the NBA team ever since. After almost two decades with the franchise, he worked his way up from communications manager to vice president of basketball communications.

Tomlin’s affinity for sports public relations came from his time with UK Athletics. He joined its media relations department as a student volunteer, helping with the variety of sports UK has to offer. His experience there pushed him to pursue communication to progress toward a career in sports.

By his junior year, he was already putting in 40 hours of work each week for the UK Athletic Department while also studying as a full-time student. His experience helping the UK basketball teams would also set the tone for his future career.

“I think I figured out very quickly that there was a career there that I don’t think I knew existed when I was growing up in Maysville, Kentucky, and that sports could be your corporate America,” Tomlin said. “And I very quickly decided that’s what I wanted to do.”

Within a few months of graduating, Tomlin scored an internship with the New Orleans Hornets. Since it was the team’s inaugural year, there was a lot of groundwork establishing the NBA franchise that he wouldn’t have gotten to experience otherwise. He credits his association with the well-known and well-respected UK Athletics Department for getting him a year-long internship.

He then had another short stint with a professional sports team but this time in the NFL. Working for the Denver Broncos, Tomlin spent his Sundays completely dedicated to the team. However, having grown up as a Bengals fan, he quickly became disillusioned working in what he called the “corporate machine” of professional football.

Luckily for him, he got a call from the Mavericks, bringing him back to the NBA. With the league’s pace, environment, personalities and small family feel, Tomlin said the career move has been a natural fit.

Throughout his tenure with the Mavs, he has steadily worked his way up the ladder. He started as a coordinator who was responsible for statistics and getting players interviews. The longer he stayed on, the more he was able to work with star players like Dirk Nowitzki, for whom he handled all local, national and international media requests. He also handled Mavericks Owner Mark Cuban’s media as well as the head coach and general manager.

In fall 2019, Tomlin was charged with heading up communications for the team as the vice president. While COVID-19 has had him and the NBA constantly changing their ways of operation, Tomlin has also had the responsibility of introducing new Head Coach Jason Kidd and new General Manager Nico Harrison to the franchise. As Tomlin grows more seasoned in his role, he plans on making changes to his own game plan.

Although his career has so far been successful, it hasn’t been all work and no play. Some of Tomlin’s favorite memories include the Mavs winning the NBA Finals in 2011, watching Nowitzki’s career take off and getting to travel to and meet people from all over the world. Growing up, he would have never thought these sorts of opportunities were possible, but now he couldn’t see himself without them.

“I think my tenure here sort of speaks for itself,” Tomlin said. “Over 18 years, there were plenty of times where I could’ve maybe moved on or I could’ve said, ‘Hey, this isn’t for me,’ or I could’ve said, ‘The amount of hours, the amount of time that I spend in this, is it still worth it?’ But I never asked myself those questions. When my alarm goes off in the morning and I put on sweats and go work in a gymnasium, I’m the happiest person in the world.”