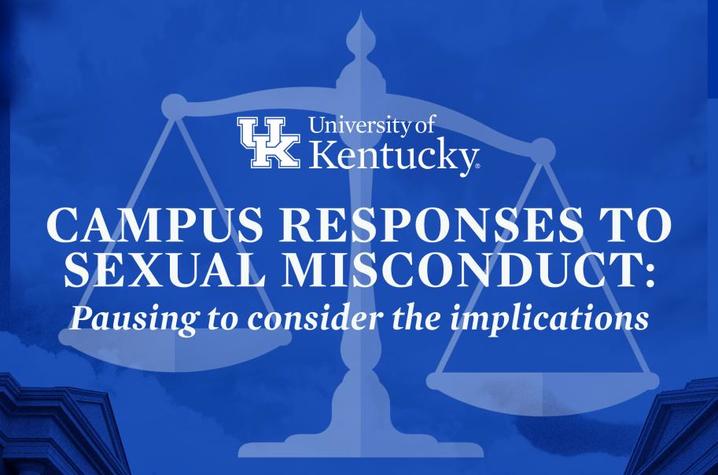 LEXINGTON, Ky. (Oct. 6, 2017) — National experts on campus sexual misconduct presented talks and participated in discussions on issues related to the topic at "Campus Responses to Sexual Misconduct: Pausing to Consider the Implications" hosted by the University of Kentucky Center for Research on Violence Against Women (CRVAW) Sept. 21-22, at the Hyatt Regency.

The national conference was a conceptual and issue-oriented conference that:

“This was a wonderful gathering of minds that work on and/or with student sexual harassment/sexual violence from a variety of perspectives, roles and lenses,” said one conference participant. “This greatly contributed to the conversation and lent to more meaningful engagement.”

Another participant agreed, “One thing that set this conference apart was the clear decision to allow different viewpoints and tension. It allowed participants to consider differently, sit in some discomfort, and hopefully grow.”

In 2014, CRVAW was designated by the UK Office of the President to develop and analyze a campus climate/violence survey for all UK students to participate. As of May 2017, Campus Attitudes Toward Safety (C.A.T.S.) has been administered to the entire population of UK students for three consecutive years.

Emerging from the C.A.T.S. survey project, CRVAW sponsored two previous conferences. The first was in 2015 focusing on campus climate assessment at postsecondary institutions within Kentucky. The second conference in 2016 expanded to include regionally-based institutions that had contacted CRVAW regarding how to administer and analyze their own campus climate assessments successfully.

The next C.A.T.S. survey findings are expected to be released in late October.

"Campus Responses to Sexual Misconduct” was sponsored by CRVAW, C.A.T.S. and the UK Office of the President.