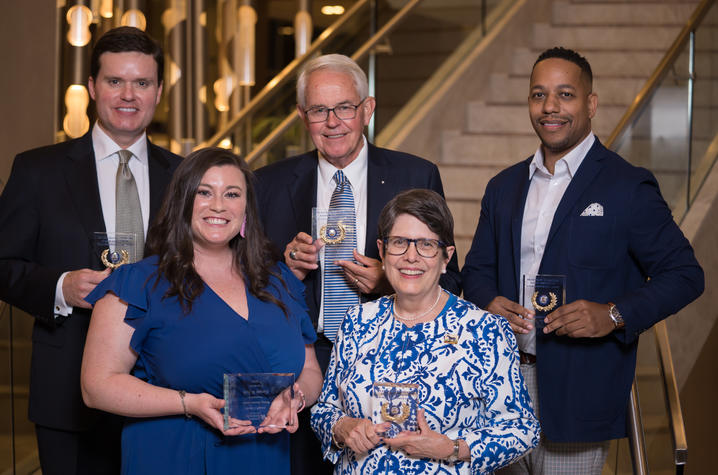 LEXINGTON, Ky. (July 7, 2022) — The University of Kentucky Alumni Association Distinguished Service Awards and Joseph T. Burch Young Alumni Award are presented annually to honor and recognize those who have provided extraordinary service to the university and the association.

The 2022 recipients were honored Friday, June 17, at the UK Alumni Association Board of Directors Summer Workshop in Lexington.

The UK Alumni Association’s Distinguished Service Award recognizes up to five recipients as selected by the Board of Directors Awards Committee. Nominees for this prestigious award should have:

Linda B. Gorton is the mayor of the City of Lexington. She is the longest continuously serving member of the Lexington-Fayette Urban County Council, serving her first term as mayor, after winning 63% of the vote in 2018. She has fostered town and gown relations throughout her political career and been a big UK supporter. She is the first nurse to be mayor, leading a city of over 320,000 residents. She is a member of College of Nursing’s Dean’s Advisory Board. In 2017, she established the Linda Bowers Gorton Military/Veteran Nursing Scholarship in honor of her husband, Maj. Gen. (RET.) Charles E. Gorton, who served his country for 39 ½ years and supported her career for over 43 years. The Gorton scholarship supports a BSN student who is a member in good standing of UK’s ROTC programs, veteran of the U.S. military or a member of the Active Guard or Reserve. She and Charlie are proud UK alumni from the Classes of 1971 and 1970, respectively. Linda was a member of the Golden Wildcat Reunion Committee, and they were both an integral part of the success of last year’s joint Golden Wildcat reunion. They are the parents of two adult children and five grandchildren.

Jay T. Hornback lives in San Diego, California. He earned a bachelor’s degree in computer science from the College of Engineering in 2004. He is an out-of-state representative on the Leadership Advisory Council and has served one term on the UK Alumni Association Board of Directors. He is a solution architect for a software company. He has volunteered with the University of Kentucky College of Engineering Career Development Office conducting resume reviews and mock interviews. He was a founding member of the San Diego University of Kentucky Alumni Club and has served as club president. He is currently the club treasurer.

D. Michael Richey, a resident of Lawrenceburg, Kentucky, received a bachelor’s degree in agriculture in 1973 and a master’s degree in 1979. He retired in January 2022 as vice president of Philanthropy and Alumni Engagement, which culminated a 48-year career at the University of Kentucky. Under his leadership, UK Philanthropy was recognized as a Top 50 Philanthropy program in 2019 by the Council for the Advancement and Support of Education, a most-prestigious accolade. He is nationally and internationally recognized for his nonprofit work. He is past president of Gideons International (2001-2004) organized in 200 countries. He is also past president of the National Association of Agriculture and Development Association, past president of the Kentucky FFA Foundation and numerous other organizations. He is a Life Member of the UK Alumni Association, a UK Fellow, a recipient of the Sullivan Medallion and recently had the newly endowed Founders Day Endowment created in his honor. He is a native of Muhlenberg County, Kentucky. He and his wife, Susan, have two children (Paul and Sarah) and six grandchildren.

Quentin R. Tyler lives in East Lansing, Michigan. He earned a bachelor’s degree in 2002 and a master’s degree in 2005 in agriculture economics from the College of Agriculture, Food and Environment and a doctorate in sociology in 2011 from the College of Arts and Sciences. He served two terms on the University of Kentucky Alumni Association board. He was named director of Michigan State University Extension in 2021 and is also associate dean and director of Diversity, Equity and Inclusion. He is the president of the University of Kentucky College of Agriculture, Food and Environment Alumni Association, advisory chair of the national board of Minorities in Agriculture, Natural Resources and Related Sciences and a member of the Kappa Alpha Psi Fraternity Inc.

In 2021, the late Amelia Brown Wilson received a 2021 Distinguished Service Award but was ill at the time of her award acceptance. Her husband, Allen O. Wilson, accepted on her behalf on Friday night.

Amelia Brown Wilson of Grand Rivers, Kentucky, was a three-time UK graduate. She earned her bachelor’s degree in family and consumer sciences in 2003, her master’s degree in community and leadership development in 2006, and her doctorate in higher education administration in 2010. While at UK, Amelia was the university ambassador coordinator, a student senator, a vice president of Delta Gamma sorority, and the 2003 homecoming queen. Amelia was an advocate for organ donation and started the Gift of Life Challenge between UK and the University of Louisville to promote organ donation. She received the Sullivan Medallion, was the 2011 recipient of the Joseph T. Burch Young Alumni Award and served 11 years on the UK Alumni Association Board of Directors. Amelia was a field representative for U.S. Congressman James Comer. She was married to two-time UK graduate Allen O. Wilson and a Life Member of the UK Alumni Association. She passed away on June 25, 2021.

The Joseph T. Burch Young Alumni Award is named for a longtime UK administrator who has spent the better part of his life in service to UK students.

A nominee for this award must be an alumna or alumnus who is a member of the UK Alumni Association, who is 35 years of age or younger at the time of nomination and who has worked on behalf of young people through the university, the association, their alumni club or in the local community in the following capacities:

Cassidy M. Hyde is executive director at the Young Professionals Association of Louisville (YPAL). She has served on the Advancement Team at Make-A-Wish, a passion and connection she found during her time at the University of Kentucky. She is a 2016 UK graduate with a bachelor of arts degree in psychology and minor in economics and has completed the Ignite Louisville and Focus Louisville programs with the Leadership Louisville Center and the Emerging Leaders Program with YPAL.

Originally from Henderson, Kentucky, she currently serves as the Young Alumni president for the Greater Louisville UK Alumni Club and as a board member and ambassador for the Kentucky Derby Festival, Kids Cancer Alliance, Leadership Louisville Center, and Greater Louisville Inc. Most notably, she is a camp counselor for one week in the summer with some of Kentucky’s strongest kids and is a proud dog mom to her adopted Border Collie, Cooper.

For more information on the awards, and to see past winners, visit www.ukalumni.net/awards.