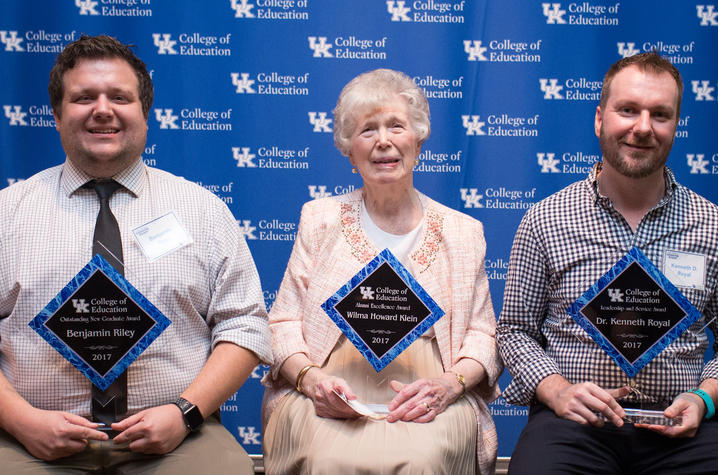 Wilma Howard Klein received the Alumni Excellence Award. The award honors those who have made outstanding contributions over the course of their career, reaching the pinnacle of achievement in their chosen professions.

Klein conducted the first instructional television program in the Commonwealth from Hawthorne Elementary in Jefferson County in 1957. She worked as a television instructor with Jefferson County Public Schools’ Channel 15 for 18 years. The telecast served Southern Indiana and counties around Louisville. The UK College of Education alumna earned her bachelor’s degree in elementary education in 1953 and her master’s degree in 1960. She served as an educator in Kentucky for 30 years, beginning in September of 1953 as a third-grade teacher at Fairdale Elementary in Jefferson County. She retired in 1983 as principal of Beechwood Elementary in Fort Mitchell.

Klein has also taught at the college level several times. In the 1960s, she spent summers as an adjunct professor at UK, assisting Ollie Bissmeyer in audio visual education. These classes were primarily for teachers who were already in the classroom to help them keep up with new technologies. After retirement, Klein and her husband moved to New Albany, Indiana, where Klein served as an adjunct professor at Southern Indiana University for several semesters.

Ben Riley received the Outstanding New Graduate Award. The award honors the noteworthy and distinctive achievements of alumni who have graduated with a baccalaureate degree within the past five years. Riley is known for using his interest in music and technology to make lessons fun and exciting for his kindergarteners. For instance, he created a system that allows him to program electronic drums to play letter sounds that, when played in fast succession, form whole words. Riley has been an advocate for students, even in kindergarten, having a voice for their learning through passion projects and project-based learning.

In 2015, during his first year as a teacher, he was nominated by Bryce Berry, one of his kindergarten students, as a UK College of Education Teacher Who Made a Difference.

“Mr. Riley is my first teacher,” Berry wrote in the nomination. “He has been great. He calls us rock stars. We sing and play on iPads. He is nice.”

Kenneth Royal received the Alumni Leadership and Service Award. Royal was a familiar face in the UK College of Education for about 10 years, as he earned a master's degree (2003) and doctoral degree (2008) from the college, and subsequently went on to join the faculty as an adjunct professor who regularly taught courses for both the Educational Leadership Studies and Educational Policy Studies and Evaluation departments. His service to research and practice has included authorship of dozens of papers and service as an editor or reviewer for more than 20 academic journals spanning the fields of psychometrics, assessment, evaluation, medical education and medicine. He has also served as a mentor to numerous graduate students in the field of education, and numerous faculty, residents and interns in the fields of medicine and veterinary medicine.

Royal’s leadership and service in the field of psychometrics has included an appointment as the editor of Rasch Measurement Transaction (RMT), an international publication dedicated to the theory and practice of Rasch measurement. Additionally, Royal serves as a leader in the Rasch Measurement Special Interest Group (SIG) of the American Educational Research Association (AERA) in both elected and advisory positions.

In addition to outstanding leadership and service in the psychometrics arena, Royal has quickly earned an international reputation in the field of medical education. He has become one of the world’s most prolific scholars in the field and his work has been featured in various mainstream media outlets including nationally-syndicated blogs and National Public Radio (NPR). He is regularly sought to serve as a consultant for numerous medical certification boards in both the United States and Europe, and as an expert panelist on committees dedicated to establishing international standards pertaining to patient reported outcomes in medicine.

Royal is an assistant professor of educational assessment and outcomes at North Carolina State University College of Veterinary Medicine.