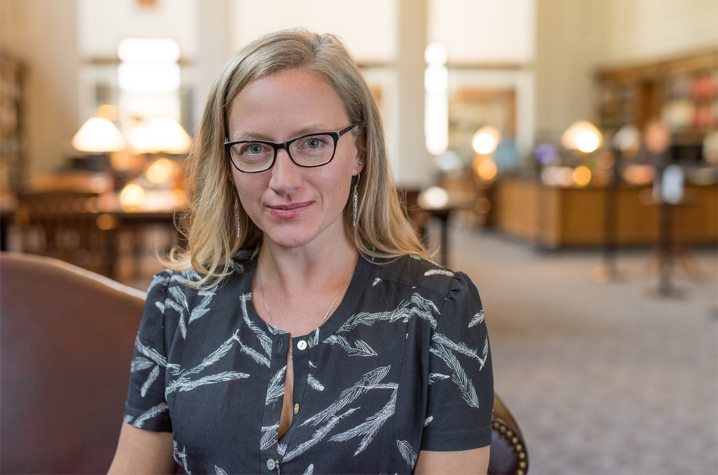 Bestowed annually and named for former UK Libraries director Paul A. Willis, the Willis Award recognizes the outstanding achievements of a UK Libraries faculty member who stands out amongst their colleagues.

“Throughout her career Deirdre has made outstanding contributions to this campus and the Libraries, and I am so pleased we can recognize her work with the Paul A. Willis Outstanding Faculty Award,” said Doug Way, dean of Libraries.

Scaggs received her master’s degree in library and information science from the University of Pittsburgh and an MFA from The Ohio State University.

She joined University of Kentucky Libraries in 2004 and has since made an indelible impact in the library system through various leadership roles, including project archivist for the John C. Wyatt Lexington Herald-Leader Photograph Collection, director of Archives, associate dean of Special Collections and director of the Wendell H. Ford Public Policy Research Center.

“As a UK Libraries faculty member, Deirdre leads with a sense of service, mentorship and optimism; she encourages experimentation, innovation, collaboration and excellence,” said Doug Boyd, director of UK Libraries’ Louie B. Nunn Center for Oral History. “In her role as the associate dean of the Special Collections Research Center (SCRC), Deirdre has transformed our unit in many ways, professionalizing and modernizing workflows and increasing our organizational effectiveness and efficiency.”

From 2017-2019, Scaggs also served as interim dean of UK Libraries, helping to empower and navigate the library system through this transitional time period.

While continuing to manage the SCRC and serve as interim dean, Scaggs collaborated with UK Libraries senior oral historian Terry Birdwhistell on the book “Our Rightful Place: A History of Women at the University of Kentucky, 1880-1945.”

Published by the University Press of Kentucky in July 2020, “Our Rightful Place” explores the struggle for gender equity in higher education by examining UK’s first women undergraduates, faculty and administrators. Through yearbooks, photographs and other materials housed in Special Collections, Scaggs and Birdwhistell’s book explores the influence women had in universities during the early period of coeducation.

Other books Scaggs has published during her tenure at UK Libraries include “The Historic Kentucky Kitchen: Traditional Recipes for Today’s Cook,” published by the University Press of Kentucky in 2013, and “Women in Lexington,” published by Arcadia Publishing in 2006.

“I’ve learned a great deal about the Libraries and the university over the course of my career and I think that serving as interim dean was a huge commitment and service for both. It’s such a privilege to be recognized by the Paul A. Willis Award and the Libraries National Advisory Board for my contributions,” Scaggs said.

A 1963 graduate of the University of Kentucky, Paul A. Willis served as a library director for 41 years throughout the Southeast. He worked as a cataloger at the Library of Congress before beginning his master’s in library science. In 1966, he began as a circulation librarian at UK’s Law Library before becoming university law librarian. He then served as director of UK Libraries from 1973 to 2003. He later served as University of South Carolina’s dean of libraries from 2004 until 2007.

During his career at UK, Willis created the Information Alliance consortium, planned construction of the William T. Young Library and expanded its collections and services.