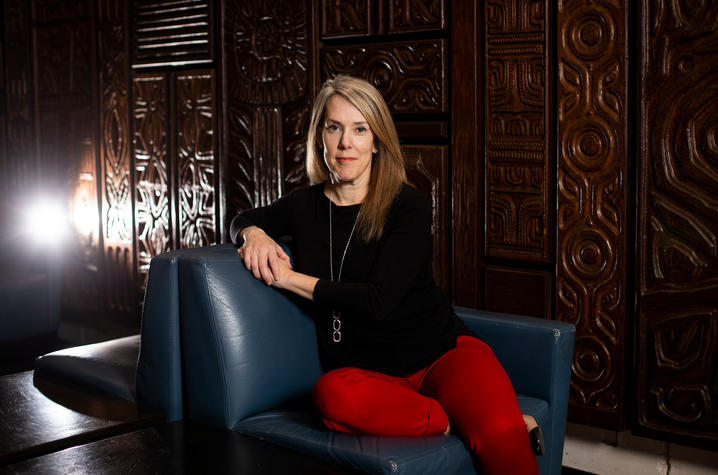 Amy Murrell Taylor’s research centers around the cultural and social history of the U.S. South in the 19th century. Pete Comparoni | UK Photo.

LEXINGTON, Ky. (Sept. 12, 2022) — It’s been 157 years since the end of American slavery, but the journey to telling the true history of that era has only just begun.

Murrell Taylor is the T. Marshall Hahn Jr. Professor of History in the College of Arts and Sciences and the author of two award-winning books, “Embattled Freedom: Journeys Through the Civil War’s Slave Refugee Camps” and “The Divided Family in Civil War America.”

Additionally, Murrell Taylor is the co-editor of the UnCivil Wars series with the University of Georgia Press, as well as an editorial advisory board member of the Civil War Monitor magazine and a past member of the board of editors of the Journal of Southern History. She is also involved in a variety of public history and historic preservation projects in Central Kentucky, which includes being a consultant for the Harriet Tubman Underground Railroad National Historical Park.

Murrell Taylor’s research centers around the cultural and social history of the U.S. South in the 19th century, with a particular focus on the era of Civil War, Emancipation and Reconstruction.

Though there are many accounts of the lives of the legends featured in the films, the new documentaries will dive deeper into the elements that set Douglass and Tubman apart.

“I was honored to be interviewed for these films and to provide historical context explaining what Frederick Douglass and Harriet Tubman were up against in their fight against slavery — and why that battle played out over decades,” Murrell Taylor said.

"Harriet Tubman: Visions of Freedom" is a rich and nuanced portrait of the woman known as a conductor of the Underground Railroad, who repeatedly risked her own life and freedom to liberate others from slavery. Born in Dorchester County, Maryland — 2022 marks her bicentennial celebration — Tubman escaped north to Philadelphia in 1849, covering more than 100 miles alone. Once there, she became involved in the abolitionist movement and, through the Underground Railroad, guided an estimated 70 enslaved people to freedom. She would go on to serve as a Civil War scout, nurse and spy — never wavering in her pursuit of equality.

Featuring more than 20 historians and grounded in the most recent scholarship, the film goes beyond the standard narrative to explore what motivated Tubman — including divine inspiration — to become one of the greatest freedom fighters in our nation’s history.

“Harriet Tubman’s life is often over-simplified by myth and caricature,” Murrell Taylor explained. “This film restores the complexities to depict her as a full person — a as a daughter, a mother, a fugitive, an abolitionist, a Civil War spy, a suffragist and so much more.”

"Becoming Frederick Douglass" is the inspiring story of how a man born into slavery became one of the most prominent statesmen and influential voices for democracy in American history. Born in 1818 on Maryland’s Eastern Shore, he escaped from slavery in 1838 and went on to become the most well-known leader of the abolitionist movement. A gifted writer and powerful, charismatic orator, it’s estimated that more Americans heard Douglass speak than any other 19th-century figure.

The documentary explores how Douglass controlled his own image and narrative — embracing photography as a tool for social justice, and the role he played in securing the right to freedom and complete equality for African Americans.

"I hope viewers of 'Becoming Frederick Douglass' will absorb Douglass’ message about the power of history and historical memory. He urged Americans to remember — truthfully and fully — the history of slavery, in order for this nation to have any chance of fulfilling its democratic promise,” Murrell Taylor said. “I think that message is critical still today — at a time when history education and the teaching of the history of race and slavery is under assault in school districts and state legislatures around the country."

Both documentaries, directed and produced by Academy Award-nominated filmmaker Stanley Nelson and Nicole London, will stream on www.PBS.org and the PBS video app.