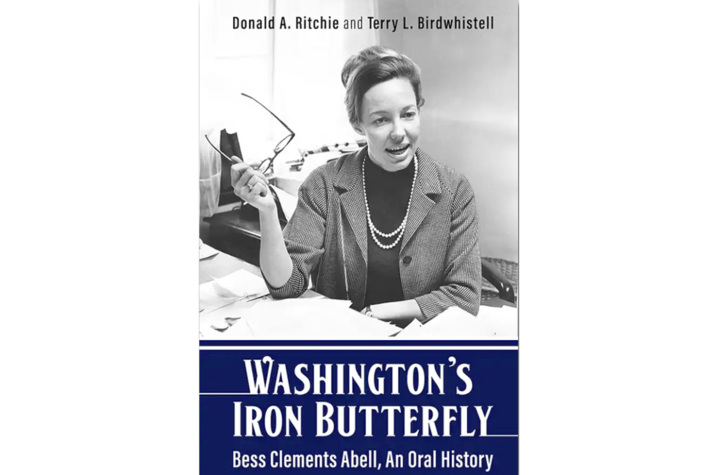 LEXINGTON, Ky. (Jan. 27, 2022) — Had Elizabeth "Bess" Clements Abell (1933–2020) been born male, she would likely have become a politician like her father, Earle C. Clements. Effectively barred from office because of her gender, she forged her own path by helping family friends Lyndon and Lady Bird Johnson.

Abell's Secret Service code name, "Iron Butterfly," exemplified her graceful but firm management of social life in the Johnson White House. After Johnson's administration ended, she maintained her importance in Washington, D.C., serving as chief of staff to Joan Mondale and co-founding a public relations company. Authors Donald A. Ritchie and Terry L. Birdwhistell draw on Abell's own words and those of others known to her to tell her remarkable story in "Washington's Iron Butterfly." Focusing on her years working for the Johnson campaign and her time in the White House, this engaging oral history provides a window into Abell's life as well as an insider's view of the nation's capital during the tumultuous 1960s.

The book is already receiving high praise from critics and those who knew Clements Abell personally.

“Few had intimate access to the Johnson White House like Bess Clements Abell — a young Kentucky woman who took her political savvy as a former governor's daughter from Morganfield to the Potomac. Talented and likable, described as ‘feisty and funny’ by the editors, she was known to be gracious, but "tough as nails" when things had to get done. An important read for Kentuckians and anyone wanting to know more from inside the Oval Office,” shared Bill Goodman, executive director of Kentucky Humanities.

“To me, Bess was wisdom, humor, competence, creativity, loyalty, reliability and kindness on two feet. But most of all, she was a once-in-a-lifetime friend. If you care about your country and the ‘can do’ spirit of a ‘can do’ woman ahead of her times, the story of Bess Abell will inspire you and comfort you in a time when we all need both,” said former first daughter Luci Baines Johnson. “In my eyes, Bess will always be the person I wanted to be when I grew up,” added Lynda Johnson Robb.

Donald A. Ritchie is historian emeritus of the United States Senate. He conducted oral history interviews with former senators and retired members of the Senate staff as part of the Senate Oral History Project and edited the transcripts of Senator Joseph R. McCarthy's investigations. Ritchie has authored a number of books including “Electing FDR: The New Deal Campaign of 1932,” and “Press Gallery: Congress and the Washington Correspondents,” which won the Richard W. Leopold Prize of the Organization of American Historians.

Terry L. Birdwhistell, Ed.D., is senior oral historian and founding director of the UK Libraries Louie B. Nunn Center for Oral History. He previously served as the dean of UK Libraries. He is a former president of the Oral History Association and is co-author of “Our Rightful Place: Women at the University of Kentucky, 1880-1945.”

The University Press of Kentucky is the scholarly publisher for the Commonwealth of Kentucky, representing a consortium that includes all of the state universities, five private colleges and two historical societies. The press’ editorial program focuses on the humanities and the social sciences. Offices for the administrative, editorial, production and marketing departments of the press are found at the University of Kentucky, which provides financial support toward operating and publishing expenses. ​