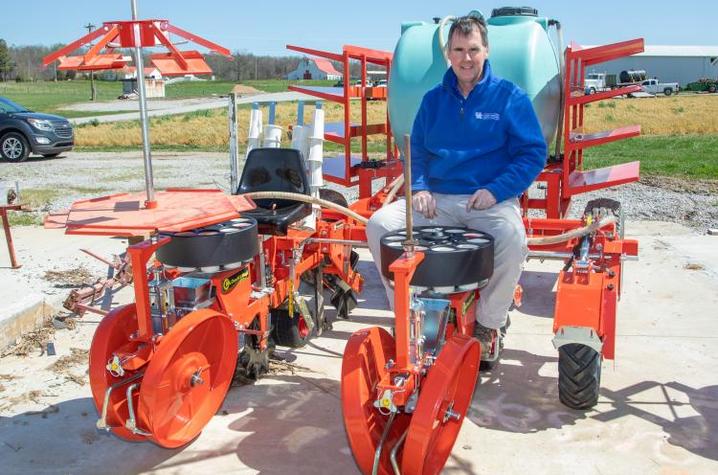 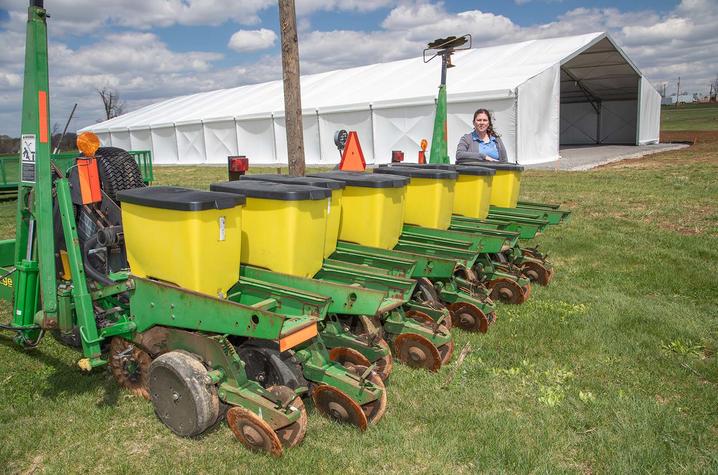 LEXINGTON, Ky. (April 25, 2022) — While it has only been a few months since the University of Kentucky Research and Education Center (UKREC) at Princeton took a catastrophic direct hit from an EF-4 tornado, center scientists are beginning to ramp up their research programs for the growing season.

Depending on the program, research will look different at the center than in past years. The center, which encompasses nearly 1,600 acres, lost almost all of its facilities and research-grade equipment. Due to these losses and supply chain issues, some research programs may not be able to resume normal operations for the foreseeable future.

“While we are resuming research, some programs are going to look and feel a little different for at least the next year,” said Carrie Knott, UKREC director. “All researchers are committed to supporting Kentucky producers and are going to great lengths to do so with what facilities remain. Please bear with us as we work to rebuild.”

Research programs will vary depending on the amount of equipment and facilities needing to be replaced or repaired. Some researchers will start the season with small setbacks while others may take much longer before they can return to their pre-tornado levels.

Kiersten Wise, UK extension plant pathologist, lost many important disease samples and will have to restart many of her research efforts. This includes a project studying the Northern corn leaf blight fungus’, Exserohilum turcicum, adaptation to fungicide use and potentially resistance development. Wise’s program was the only laboratory in the United States working on this project, and prior to the tornado, she received samples from across the country for analysis. Those samples are now mostly gone, along with samples for a project on ear rots and historical disease samples that were stored in her lab under special conditions.

“We have to build our collections up and restart our laboratory research program,” Wise said. “The hard thing is I want answers for the farmers I work with, but now it is going to take some time.”

The center’s beef unit facilities and fences sustained significant damage. All handling facilities were destroyed. The station also lost six miles of fence. Due to this loss, some of the center’s herd was temporarily relocated to UK’s Oran C. Little Research in Woodford County. Katie VanValin, UK extension beef specialist, plans for those cattle to return to the station this spring as perimeter fencing gets rebuilt.

“The damage has probably set us back a year because cattle research needs to be conducted at certain times to be valuable,” VanValin said. “Our first priority is to maintain the health of our cow herd.”

VanValin joined the faculty at the center in 2020 and was in the beginnings of her research program at Princeton when the tornado hit. This year, she will continue the long-term selenium study started by Roy Burris, James Matthews and Phillip Bridges. She also plans to focus on research areas that do not require live animal handling.

While all the solar panels that transmitted data from the herd’s smart ear tags to a computer at the station were destroyed in the tornado, VanValin was able to secure data up until the tornado hit. She hopes to analyze this data collected just prior to the tornado from the herd’s Cow Manager Ear Tags to gain better insights into the animals’ reaction to the natural disaster.

Andy Bailey, UK extension tobacco specialist, lost nine of 10 barns at the station and sustained damage to his transplanter and sprayer. He expects it will take a few years to rebuild his facilities and is working with an equipment supplier to repair the transplanter. He and his graduate students Andrea Keeney and Caleb Perkins will continue research this year with Keeney on track to graduate with her doctorate in May 2023. Thanks to partnerships with Murray State University and the University of Tennessee Highland Rim Ag Research and Education Center, Bailey and the students will conduct almost all of their planned research at both locations.

Bailey has conducted research at both locations for the past two decades, but it will be ramped up this year. He also plans to do more on-farm trials with Kentucky producers including black shank trials in Hopkinsville and a burley trial on a Daviess County farm. The Calloway County office of the UK Cooperative Extension Service is providing them with office space so they can be closer to their research at Murray.

While Bailey hopes the transplanter is fixed before spring planting, both UT and Murray State have offered to allow him to use their on-site equipment so he can get his research plots planted.

“I’m really happy we have these relationships,” he said. “We won’t be able to do everything we had planned, but we will come close. I can’t thank Murray State University and the University of Tennessee enough.”

No tobacco was in the barns destroyed by the tornado. Bailey had finished stripping his research in mid-November. His research data for the past 10 years was also retrieved from the station’s server.

Soil scientist Edwin Ritchey plans for much of his research program to continue as planned but will do more research and extension activities off station property than he has in past years.

The Kentucky Agriculture Training School resumed offering workshops shortly after the tornado. Some programs will be held offsite, and the program lineup will be different than in past years.