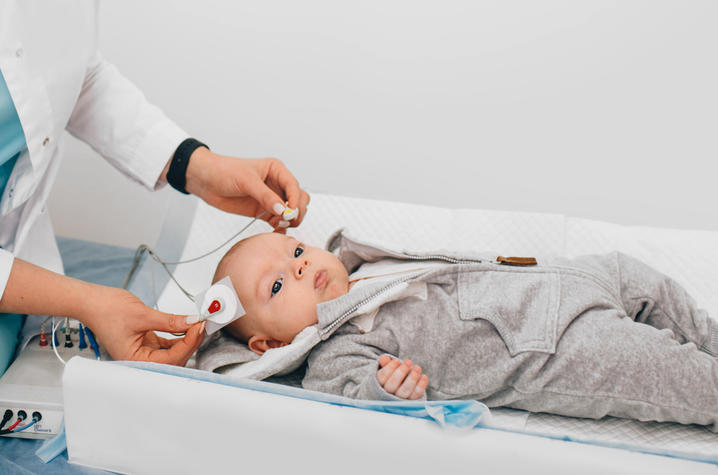 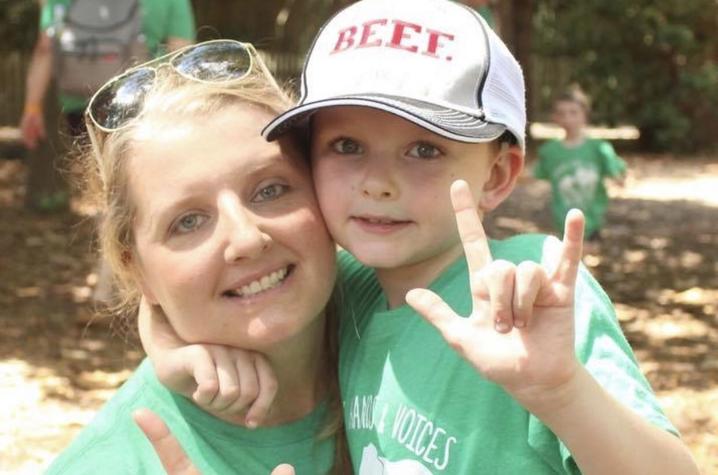 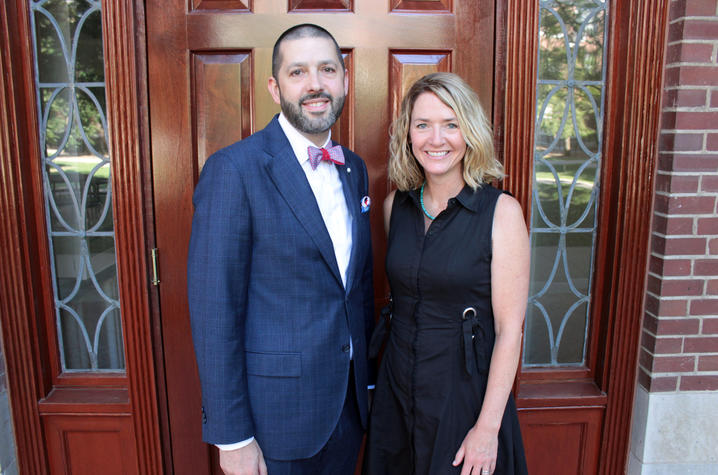 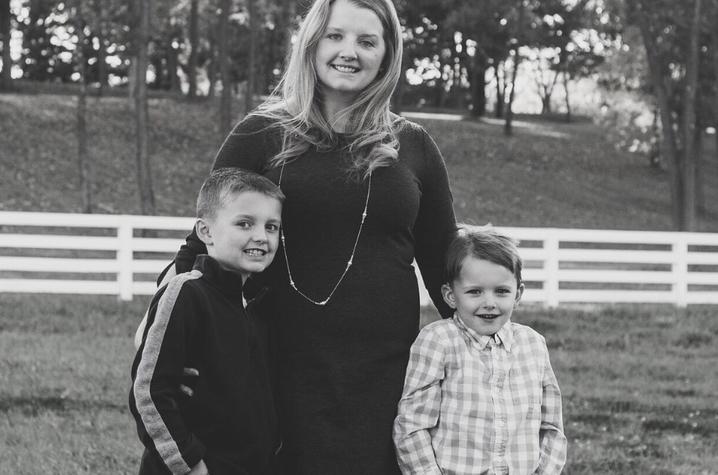 Lexington, Ky. (July 12, 2019) – Kristi Grider still tears up when she talks about the day she took her two-month-old son, Kenton, now seven years old, for follow-up hearing testing. His newborn hearing screen, which almost all children receive in U.S. hospitals before they go home, had indicated a potential abnormality, but she was told that her baby probably just had fluid in his ears and that she needn’t worry.

So when it was time for follow-up testing a few weeks later, she got a babysitter for her older son while her husband was at work, and she went alone with Kenton to complete his auditory brainstem response (ABR) test. The testing, which has to be done on both ears, requires that the baby is asleep.

“It was a very hard day,” she recalled. “The test can be difficult given the baby needs to be asleep for the entirety of the exam.  Being alone at the appointment, I felt very overwhelmed.  After the audiologist had everything set up, she stepped out so that I could nurse Kenton back to sleep. That alone was a task that took a considerable amount of time. Even though the audiologist was very patient and allowed plenty of time to ensure he was sleeping comfortably, he cried and fussed a lot while being prepped and connected to the ABR equipment. It was difficult to get him settled down.”

At the end of the appointment, Grider was by herself when she learned that her son had bilateral profound sensorineural hearing loss. Even as an ER nurse, she was shocked and a bit confused at the diagnosis.

“When the audiologist said ‘profound hearing loss,’ I asked, what does that mean? Is he deaf?”

The answer was yes. Like Kenton, most children who are deaf or hard of hearing are born to hearing parents who don’t have experience with hearing health care or sign language. But in the almost eight years since that day, Grider has become an expert in navigating hearing health care and advocating for her child — and now she’s now using her own experience to guide other families through the complicated, challenging process of getting ABR tests.

Grider is part of a new five-year, $3.2 million project called Communities Helping the Hearing of Infants by Reaching Parents, or CHHIRP, which aims to improve the process of accessing ABR tests (and therefore increase the percentage of children who complete them on time) by pairing families with patient navigators — community members like Grider who have been through the experience themselves and can provide guidance and support. Up to 30 patient navigators across as many as 10 state-funded hearing health care clinics will be trained to help at least 1,000 families through the diagnostic process. CHHIRP is funded by an R01 grant from the National Institute of Deafness and Other Communication Disorders (NIDCD).

The project is led by Dr. Matt Bush, associate professor in the University of Kentucky College of Medicine Division of Otology, Neurotology & Cranial Base Surgery, and Christina Studts, PhD, associate professor in the UK College of Public Health Department of Health, Behavior & Society. The two are long-time collaborators in community-engaged research related to early intervention for children who are deaf or hard of hearing. This is the duo’s second R01 in this domain; their other ongoing grant, also funded by NIDCD, focuses on parenting interventions for young children using cochlear implants and/or hearing aids.

Their collaboration began in 2014 when they were both KL2 scholars with the UK Center for Clinical and Translational Science and realized the overlap and the power of interdisciplinary teamwork between their respective research fields. With research backgrounds in health disparities among children who are deaf or hard of hearing (for Bush) and disruptive childhood behavior (for Studts), they began to identify important research questions and create impactful research projects.

It was also during his time as a KL2 scholar that Bush discovered that many rural children who failed their newborn hearing screening were delayed or falling through the cracks when it came to diagnostic testing, but he wasn’t sure how to address the problem of engaging or educating parents facing this situation.

“I was searching in vain for a solution to this problem when I received a jolt of inspiration from a colleague in the field of head and neck cancer," said Bush. "Drawing on his experience with coordinating care for cancer patients, Dr. TJ Gal said, ‘You need someone like a navigator to get them from point A to point B.’ That was an aha moment.”

Nationally, only about 40 percent of infants get ABR testing within the recommended three-month timeframe after birth. In Kentucky, thanks to strong efforts by the state’s Early Hearing Detection and Intervention program, that number is higher, about 66 percent. But even this percentage is well below the CDC’s goal of 90 percent. Bush has seen firsthand the reasons for this. For one, few audiologists administer ABR testing, especially in rural areas, so parents often have to travel long distances—which means missing work and paying for travel costs — to do the tests. Parents and providers often have limited knowledge about hearing healthcare and screening and the importance of early identification. And, of course, the process of ABR diagnostic testing itself is challenging, sometimes requiring multiple visits if the baby won’t sleep through the test.

As is true with any diagnosis, time is of the essence when it comes to hearing and deafness. Delaying diagnosis of a child who is deaf or hard of hearing results in delayed intervention and potentially delayed language development. And the effects of delayed childhood communication can ripple throughout a person’s entire life.

In a previous pilot version of the patient navigator model for families whose infants needed ABR testing, supported by a K23 career development award from NIDCD, Bush found that navigation significantly improved timely follow-up and diagnosis. Of families in the pilot study who received patient navigator support, 93 percent received diagnostic testing in a timely manner with an average time of diagnosis within the three-month window of time after birth. Of the families who weren’t paired with a navigator, only 62 percent had the recommended testing and their average time of diagnosis was delayed beyond the recommended three-month milestone. He and the CHHIRP team are scaling up this approach with the support of the R01 grant.

“With CHHIRP, we aim to improve the public health system of infant hearing screening and timely diagnosis by providing patient navigators to guide families who are referred for follow-up testing after a newborn doesn’t pass their initial hearing screen. This research helps to bridge gaps in knowledge and support for parents a lot earlier in the timeline, from the first moment an infant is discharged from hospital,” Bush said. “The role of the patient navigator is to come alongside these families and educate them on the importance of follow-up and support them if they have questions, concerns, and fears. A navigator is someone who cares and who’s been there before, who can maybe preemptively address feelings of loneliness and isolation in caring for a child who may be facing permanent hearing loss. We’re trying to think holistically about how we can reach out, support these families, and get them where they need to go.”

By using a hybrid effectiveness-implementation research design, the CHHIRP project also aims to accelerate the process of developing, testing, and implementing this intervention in a “real world setting”, a process which can take on average 17 years in the traditional research-to-practice pipeline. CHHIRP will gauge not only if the patient navigator model is effective, but also what contextual factors enhance or hinder its effectiveness.

“We’re looking at the effectiveness of using patient navigators, and at the same time we’re investigating implementation factors like characteristics of the navigators, families, clinics, and communities that might affect implementation outcomes like acceptability, fidelity, adoption, costs, and reach,” Studts said. “So we’re speeding up the process and getting a lot of information about what works best so we can plan for scale-up and sustainment. We’re setting the stage for rapid translation into practice if the results show that patient navigation is effective.”

Both Bush and Studts are quick to emphasize the multidisciplinary team that powers the CHHIRP project, as well as the years of work that led to their other R01 grant. From a statewide community advisory board (which includes Grider) to partners at the University of Louisville and the state’s Office for Children with Special Health Care Needs, CHHIRP depends on what Bush called “a holy host of team members and collaborators and consultants.”

“We’ve needed a wide range of expertise to put this together and move forward,” he said.

“It’s great to be collaborating with people whose backgrounds and skill sets are complementary — people who come from different worlds but who can unite around the same problem, and we can work on this from every angle to make it a comprehensive approach. The emphasis is on getting the diagnostic results in a timely fashion so that parents can be informed and make decisions about how to move forward, whatever path they choose,” Studts said.

For Grider, who is completing her doctorate of nursing practice through Frontier Nursing University while collaborating on the grant, working with CHHIRP remains deeply personal.

“My hope for CHHIRP is that we see an increase in children who get an early or on-time diagnosis.  I look forward to making those connections with families who have a child who is deaf or hard of hearing, to walk that journey with them and give them the support they need, it means so much. It’s a world of uncertainty when you first enter it. I wish that when my family started this journey, we’d had a patient navigator to work with because you find great comfort in knowing others who have walked the journey you’re about to walk.”