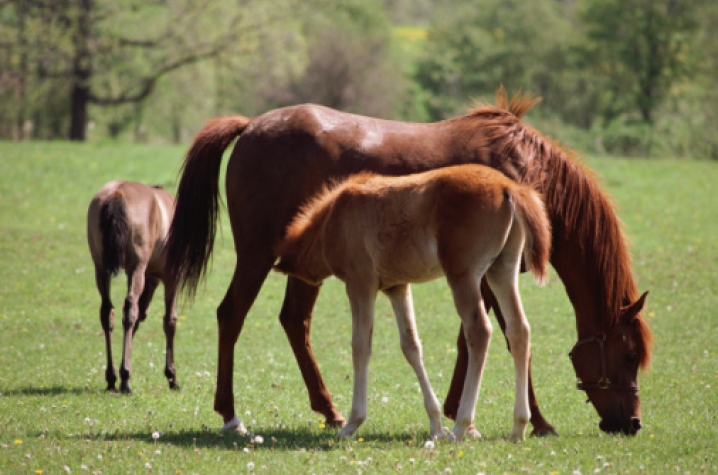 LEXINGTON, Ky. (Sept. 27, 2010) – As horse enthusiasts make their way to the Kentucky Horse Park for the 2010 Alltech FEI World Equestrian Games, they are likely to see the University of Kentucky’s Maine Chance, Spindletop and Coldstream farms, located along Newtown and Iron Works pikes. In the past several years, UK College of Agriculture personnel have worked diligently to improve the look and function of these farms.

During the games, Spindletop will host a portion of the 100-mile endurance race, but the only public viewing area will be on the horse park grounds. The Legacy Trail, which connects downtown Lexington with the horse park, goes through all three farms.

The improvements will provide a pleasurable view for the public as well as support and enhance the daily activities at the farms. Every day at the farms, researchers from nearly all college departments conduct important research, professors teach students and extension specialists educate the public through workshops and meetings on various topics.

“These improvements help us provide an aesthetically pleasing part of the corridor going out to the horse park that showcases our cutting-edge research as well as enhances the educational experience for students and the public,” said Nancy Cox, associate dean for research and director of the Kentucky Agricultural Experiment Station.

The improvements have been a goal of the college for a while, but the approaching games helped speed up their completion, said Bob Brashear, assistant dean for facilities management, and Donnie Davis, director of UK’s Central Kentucky farms.

“We want to look at all aspects of the farm from land use to buildings and facilities, so they’re there to enhance and support the teaching, research and extension missions of the college,” Brashear said. “The farm will continue to be improved with new and upgraded facilities long after the games.”

“We want this to be a farm that everyone is proud of,” Davis said. “We want to continue to place an emphasis on appearance. We hope the new emphasis will be advantageous for everyone in the college.”

Aesthetic improvements to the farms include new four-plank fencing along Newtown and Iron Works pikes, new signs at farm entrances and the interstate, and updated and new facilities.

These upgrades coincide with improvements made to support the new undergraduate degree in equine science and management, which began in 2007. Upgrades were made to the Maine Chance Equine Teaching Campus, including a new teaching pavilion and renovation of a mare barn. The Department of Veterinary Sciences also has an increased capacity for reproductive physiology research.

Another important safety component was the naming of all the farm roads and installation of road signs. This was completed through a partnership with Enhanced 911 through consultation with the Lexington-Fayette Urban County Government, U.S. Post Office, Lexington Fire Department, UK Fire Marshal’s office and UK Emergency Management.

Many improvements have been made to help balance research efforts with an increased public presence on the farms. The Legacy Trail will go through sections of the farms never before opened to the public. However, fences will separate the trail from the working part of the farms, so as not to interfere with farm operations.

These upgrades have been made with consideration to the environment. In fact, many improvements were made with the goal of making the college a better steward of the land. Steve Higgins, director of environmental compliance for the UK Agricultural Experiment Station, has installed many best management practices including fencing livestock away from streams, planting hundreds of trees, removing invasive species, installing native plants and creating “no mow” zones. All were done with the goal of improving the water quality of the Cane Run Creek and its tributaries that run through the farm by reducing and preventing erosion. Higgins also has several other environmental initiatives in the works, including one with the UK dairy.