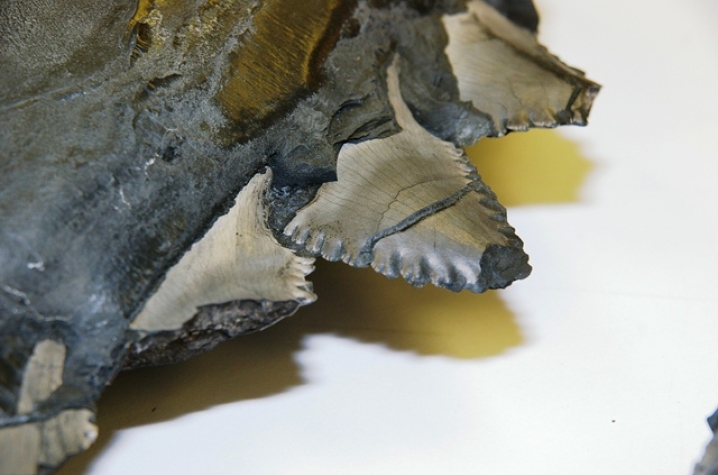 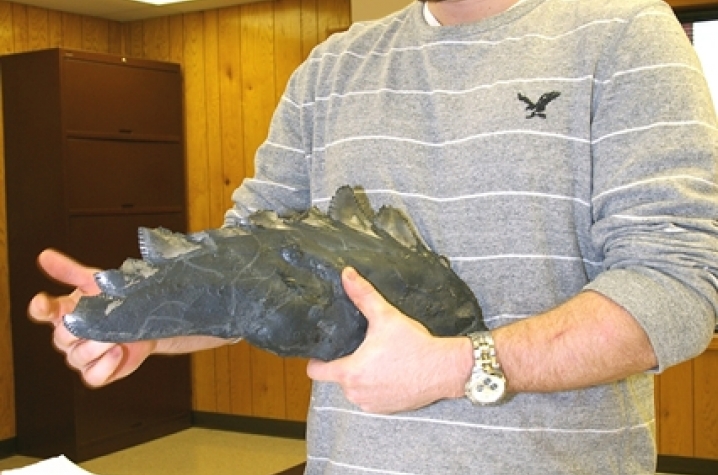 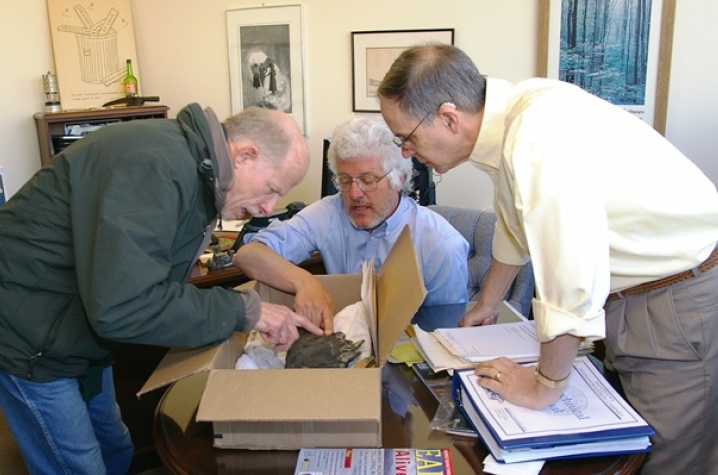 LEXINGTON, Ky. (April 5, 2011) — An alert miner working 700 feet underground in a western Kentucky coal mine noticed something jutting from the roof of Webster County Coal’s Dotiki Mine during his shift early on the afternoon of Feb. 24. The miner, 25-year-old Jay Wright, was bolting the roof at the time.

“I noticed some flaky rocks in the roof, and a small piece of rock fell,” he remembered. “When I used a pry bar to remove some more of the rock, I caught sight of something else. Part of it was already loose. All I had to do was grab it and pull it out.”

What he pulled out of the roof was the jawbone of an ancient fossil shark known to paleontologists as Edestus. In this case, “ancient” means more than 300 million years old.

At the Kentucky Geological Survey (KGS), Associate Director Jerry Weisenfluh, whose expertise includes coal mining, heard from acquaintances in the industry about the find. He decided to go to Webster County to check on what he had heard.

“Friends in the coal industry told me this was a pretty large, intact jawbone of a fossil shark and that it included several complete teeth. So I thought it could be worth the trip,” Weisenfluh said. “When Jay and the mine’s chief engineer, Eric Blanford, showed me the specimen, which is greater than 18 inches long, I think my own jaw must have dropped to the floor!”

Weisenfluh spent some time in the mine office talking to Wright about the find. Wright described how he had found the fossil about 8 inches above the coal seam and four miles into the Dotiki mine shaft.  He began checking the Internet to find out more about the fossil, eventually coming across its name. Wright has found several other fossils while operating a continuous miner or bolting the roof of the mine. Chief engineer Blanford says the mine chose to let Wright keep this one, too.

Wright has agreed to let Weisenfluh bring the jawbone back to KGS at the University of Kentucky to be examined more closely by researchers at KGS and UK’s Department of Earth and Environmental Sciences.

“Plenty of examples of Edestus have been found in western Kentucky,” remarked Frank Ettensohn, a professor in the department. “This is certainly the largest specimen that I’ve seen.”

Ettensohn, who has a paleontology background, noted that shark skeletons are mostly cartilage, which decays relatively quickly. And with so little of the skeletons of ancient sharks to study, there is plenty of debate among paleontologists about how the ancient shark appeared. But the shark’s jaw is composed of bone, which can last much longer. The Webster County specimen includes original bone material encased in shale and several serrated triangular teeth, some of which are complete, measuring 2 inches wide at their base. Based on the size of this specimen, Ettensohn believes this creature may have been about the size of a modern great white shark, or as much as 20 feet in length.

Ettensohn and Steve Greb of KGS plan to collaborate on investigating the find to learn as much about its makeup as possible. “In Kentucky and surrounding areas, Edestus jaw specimens have been found in marine shales above the Springfield and Herrin coal beds, which would be upper Middle Pennsylvanian in age, or about 307 million years old,” said Greb. “The region was, of course, under a shallow sea at the time these sharks were around.”

Greb and Ettensohn believe this distinctive specimen, with some features not seen on earlier finds, may contribute to the understanding of this prehistoric shark.

Meanwhile, coal miner Jay Wright, who lives with his wife and three small children in nearby Dixon, Ky., plans to keep watch for more fossils in the mine.