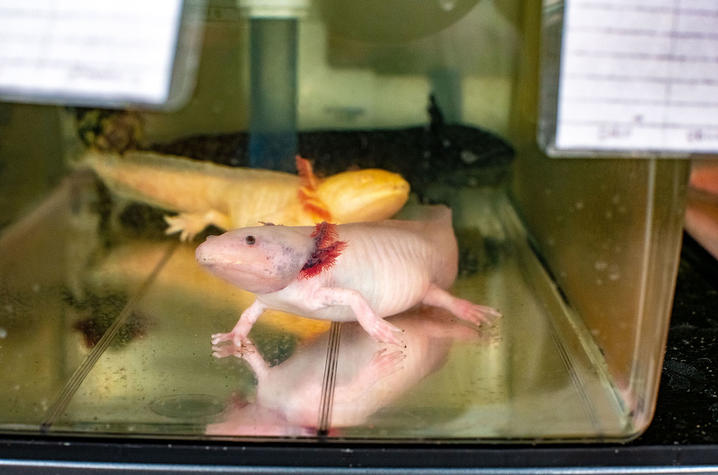 Through reconstructing an evolutionary history, a team from UK's Department of Biology discovered that genetic differences between axolotls and other salamanders from the region were almost indistinguishable. Photo courtesy of UK Research Communications.

For nearly 20 years, labs across the UK campus have studied the axolotl — a type of salamander native to Mexico — due to its ability to regenerate body parts, including limbs, tail and even the spinal cord. By studying axolotls, researchers at UK, and around the world, hope to one day develop therapies that may help humans regenerate their own tissue.

One of the reasons the axolotl is so fascinating in regenerative research is because of its paedomorphy, which is the retention of juvenile characteristics into adulthood. Instead of metamorphosizing and moving from water to land like other salamander species, the axolotl continues living in water its entire life. Being isolated to an aquatic environment has given the scientific community the impression that axolotls are a highly distinct species — and that distinction is what made studying axolotls’ regenerative abilities so appealing.

However, a UK-led team, in collaboration with researchers from Mexico, have discovered that the axolotl is actually not much different from other species of tiger salamanders. Through reconstructing an evolutionary history, they found that genetic differences between axolotls and other salamanders in their region of Mexico were almost indistinguishable.

“We assumed the opportunity for gene flow (in axolotls) was really low — if your body doesn’t allow you to move across land, then that means genes aren’t going to go out and other genes won’t come in,” said David Weisrock, professor and chair of the UK Department of Biology and co-author of the study. “But our data show that is not the case. There’s a strong signature of gene flow moving in and out of axolotl populations that is in contrast to what most biologists would have expected. In fact, it has a very clear evolutionary history of genetic exchange with other salamanders around it.”

But other salamanders do have the ability to metamorphosize and become terrestrial. So why does the axolotl remain aquatic?

One of the reasons may be local adaptation, where an environment (such as a lake) leads to natural selection that maintains a phenotype, or a particular trait, despite there being gene flow from other populations.

Another reason may be phenotypic plasticity, when a similar genetic background yields multiple phenotypes.

“We don't know to what extent phenotypic plasticity is driving this pattern, or how much of it is local adaptation,” said Levi Gray, Ph.D., a former postdoc at UK who co-authored the study. “Those are totally open questions. (Salamander) populations in the U.S. have been studied to try and better understand them, but the Mexican populations — where a lot of this really interesting variation occurs — hasn't been studied in the same way."

Gray also suspects that additional populations — maybe even metamorphosizing axolotls — could be undiscovered in the region, where a slightly different habitat would make them more inclined to move to land.

These are all topics Gray hopes will be explored in the future, but notes axolotls are becoming increasingly difficult to study. According to the IUCN Red List, the axolotl is listed as critically endangered, with less than 1,000 remaining in nature.

So what does this all mean for the future of axolotls and regeneration research?

The team hopes their findings will be used in ways to not only better understand axolotls, but to help conserve them. The research also opens doors for future studies across a variety of disciplines.

“A study like this presents new opportunities for studying regeneration,” said Kathryn Everson, Ph.D., co-author and former postdoc at UK. “One of the most interesting traits about the axolotl is its paedomorphy, and our study sheds light on just how important that trait is for promoting diversification, or allowing new species to evolve. And it turns out, it’s not as important as we once thought. We know now that all of these salamander species are very closely related to one another. So rather than only focusing on the axolotl — an extremely endangered species — maybe we think about things differently moving forward.”

“We’re able to show which species are more closely related to each other, or share a most recent common ancestor,” Weisrock said. “So if there are developmental biologists, or stem cell regenerative biologists, who want to look at how the ability to regenerate important tissues varies across species, we provide this important framework for viewing that.”

And even if they’re not genetically distinctive, the team says axolotls are still a very important species at the heart of regeneration research, and their natural history in Mexico holds a wealth of knowledge for understanding important concepts of evolution. The axolotl is also very culturally significant within its region of Mexico.

“Just because there are other genetically-similar populations around should not downplay the significance of axolotl populations,” Weisrock said. “We all know how significant the axolotl is for developmental and stem cell research. Now, we can finally understand that in the context of all of its relatives.”

The team’s paper “Geography is more important than life history in the recent diversification of the tiger salamander complex,” is published in the Proceedings of the National Academy of Sciences (PNAS). The study was the product of a broad collaboration, including many UK graduate and undergraduate students, and researchers from institutions in the U.S. and in Mexico.