Cancer cells undergo metabolic alterations to meet the increased energy demands that support their excess growth and survival. The Krebs cycle in the mitochondria of cells is used to supply both energy and building materials for cell growth. Two mitochondrial enzymes – pyruvate carboxylase (PC) and glutaminase replenish carbon to the Krebs cycle.

Published in the Journal of Clinical Investigation, the study collected metabolic data directly from more than 120 human lung cancer patients. UK's Center for Environmental and Systems Biochemistry (CESB) researchers Teresa Fan, Andrew Lane, and Richard Higashi led the study, with work done at both UK and the University of Louisville. The researchers worked with other collaborators to measure the in situ activity of these two enzymes in patients with early stage lung cancer. When they infused the patients with a glucose tagged with stable heavy atoms immediately prior to surgical removal of tumor tissue, they found that PC was selectively activated  – in other words, PC expression may play an important role in the development of lung cancer.

By using molecular genetic tools to reduce the amount of PC in human lung cancer cells, the team observed decreased cell growth, a compromised ability to form colonies in soft agar (a gelatinous material specifically used to grow bacteria and other cells), and a reduced rate of tumor growth in mice. The loss of PC also induced widespread changes in the central metabolism of the cell, suggesting a role for PC in early stage metabolic reprogramming.

“We now know much more about metabolic reprogramming of cancerous tissues in human patients, particularly that the activation of pyruvate carboxylase is important to lung cancer cell growth and survival,” said Fan, UK professor of toxicology and faculty member of the Markey Cancer Center and CESB at the University of Kentucky. “Ultimately, figuring out how to target PC may help researchers develop new, more effective therapeutic strategies to improve upon current lung cancer treatments, which are limited and harmful.”

The team’s work was funded by the National Cancer Institute, the National Institute of Diabetes and Digestive and Kidney Diseases, and the National Institutes of Health (NIH)Common Fund. UK’s RC-SIRM is one of six NIH Common Fund-supported Regional Comprehensive Metabolomics Resource Centers. The overall mission of the Center is to enable cutting-edge approaches and to provide state-of-the art instrumentation for stable isotope-resolved metabolomics.

Unlike radioactive isotopes, stable isotopes do not decay, and they occur naturally in the body in low amounts. Enriching these isotopes with glucose or glutamine allows researchers to track the atoms through the metabolic transformation process, so researchers can backtrack to see what reactions have occurred and detect whether cancer cells have altered the metabolic pathway. 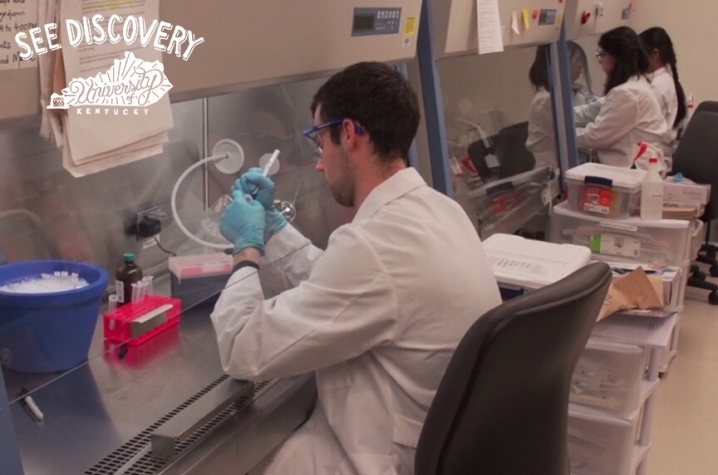