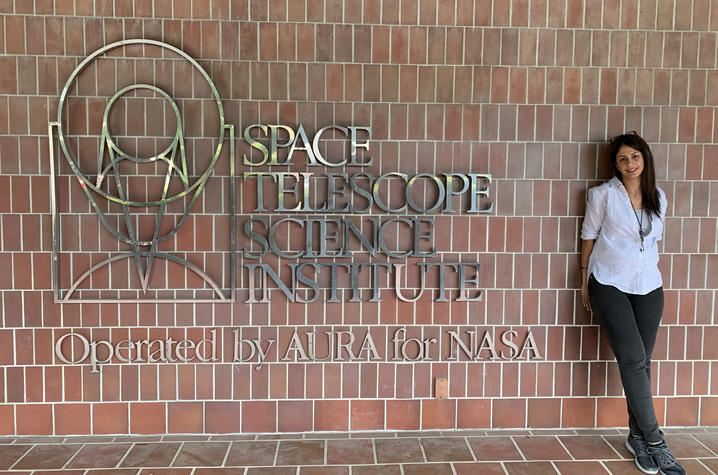 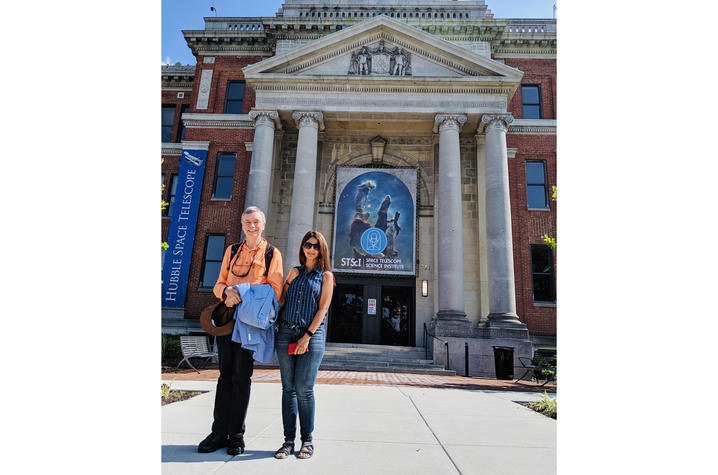 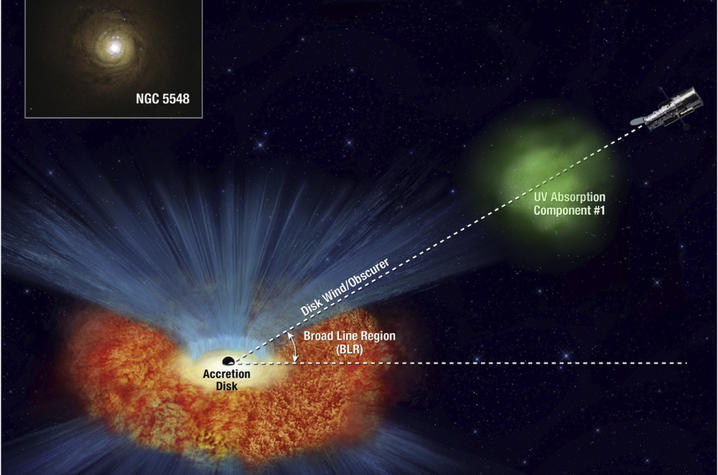 LEXINGTON, Ky. (Aug. 4, 2020) — It’s not every day members of an international team of scientists find themselves perplexed over unexpected data results. And it’s even less likely the team will turn to a student to help make sense of the findings. But this was what happened with University of Kentucky student Maryam Dehghanian.

Dehghanian, a doctoral candidate in the UK Department of Physics and Astronomy in the College of Arts and Sciences, has spent the last three years helping a team of NASA and European Space Agency (ESA) astronomers understand observations they made while studying a supermassive black hole at the center of NGC 5548, a nearby galaxy. The observations were made as part of NASA’s Space Telescope and Optical Reverberation Mapping (STORM) project, which used the Hubble Space Telescope (HST) to measure the flow of material around the black hole.

“The goal of the HST STORM project was to watch changes in the brightness of the black hole,” Dehghanian said. “Such changes have become a major tool astronomers use to map out where the material is near the black hole and measure the mass of the hole. Unexpectedly, the observations showed some paradoxes in which some causal behavior of nature was broken.”

The team was astonished to see the material near the black hole no longer changed as the brightness of the black hole changed. More than a hundred astronomers from around the world were involved, and they were mystified at what they saw. There was no theory for how this could happen and, in frustration, the hundred-member team said that it appeared as if the black hole had “gone on holiday.”

Confounded, the team approached Gary Ferland, an astronomy professor at UK, to see if his computer coding project, known as “Cloudy,” could help them understand the observations. Cloudy helps astronomers understand how light from distant celestial bodies is produced and received here on Earth.

Dehghanian, who was a new student in Ferland’s research group at the time, decided to take the project on as her Ph.D. thesis.

“Astronomy is an entirely observational science — we cannot do an experiment or make physical measurements,” Dehghanian said. “So we have to simulate what we observe with computers. In Dr. Ferland’s group, we perform computer modeling and spectroscopic simulations. We use and continuously develop the Cloudy code for this purpose.”

Working with this code system, Dehghanian proposed a new theory, in which a wind, or high-velocity clouds, originate near the black hole. The variations of these winds explain the holidays.

“I modeled the behavior of the HST observations and showed how variations of the wind could produce what the HST saw,” Dehghanian said.

Dehghanian’s model is the first and only physical explanation for the black hole “holidays.”

Bradley Peterson, professor emeritus at Ohio State University and Distinguished Visiting Astronomer at Space Telescope Science Institute, is one of the senior leads on the STORM project. He said Dehghanian amazed the team right away during her first meeting with the group in 2017.

“The AGN STORM data were the best we’d ever obtained, but also the most confusing,” Peterson said. “We had worked out that an important change had occurred at higher energies than we could observe directly with Hubble. That’s when we knew we had to recruit Maryam and Gary to the team. We couldn’t have explained the data we had without the models that Maryam developed over the last three years.”

“To explain the various anomalies in our data in a unified way, Maryam arrived at the ingenious solution of hiding the source of the obscuration out of our direct view but ascertaining its properties by analyzing its impact on things we could see,” he said.

Ferland says never before has such a major project with such a major commitment of spacecraft time been entrusted to a single graduate student.

“This project is a great example of the ‘new age’ of observational astronomy,” Ferland said. “The orbital observatories used in this study cost billions of dollars and are controlled by many countries working together. The internet binds the many dozens of astronomers in the STORM project and the orbital observatories Maryam used. UK has long had a commitment to high-end research computing, which has helped develop the Cloudy code. Maryam brought all of this together to discover a hidden ingredient, the wind near the black hole, and showed how it affects what we see.”

Dehghanian has now been the lead author of three papers on the topic in the Astrophysical Journal (ApJ), the world’s most prestigious astronomy journal. Her third paper, published in the ApJ this week, is the first holistic view of how gas falling onto the black hole in the center of a galaxy can strongly affect HST observations. The major result is the discovery of how the wind affects the outer layers of the galaxy.

“This new paper draws together data from six orbital observatories used to map out the inner regions of the galaxy,” Dehghanian said. “Furthermore, I proposed a novel tool by which we can check the presence and track the evolution of the winds. By applying this novel method to the data, we will be able to document how winds evolved and how they affect the emission lines. The outcome will improve our fundamental understanding of active galaxies nuclei feeding and feedback and result in diagnostics that could be applied to other datasets. If it happened once in NGC 5548, it will happen or has happened again, in any galaxy with an active black hole!”

She is now working on her fourth paper which will include results about the winds and their effects on their host galaxies.

Originally from Iran, Dehghanian found her passion for astrophysics and computer coding while completing her undergraduate and master’s degrees in her home country. She decided to come to UK in 2016 to work with Ferland and the Cloudy project because it is one of the most cited astrophysical computer codes.

Dehghanian plans to graduate by the end of 2020 and wants to continue her research as a postdoctoral fellow. She was recently invited to join another important project that will use the Hubble Space Telescope to observe another galaxy. She will create computer models of the new observations and gather spectroscopic data.

“Working on this project, I got to know the top scientists in the field who generously supported me and helped improve my skills,” Dehghanian said. “This also gave me the opportunity to greatly expand the circle of the people that I know, from local scientists here at UK to the best people located all over the world. I feel that I am on my path to have a more purposeful life, which is very satisfying.”