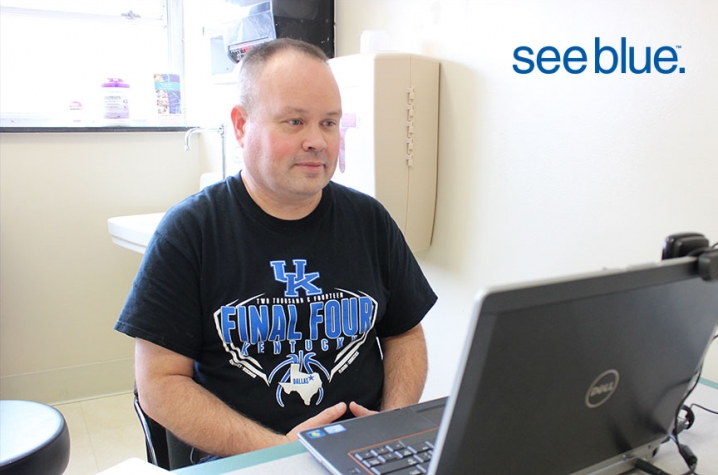 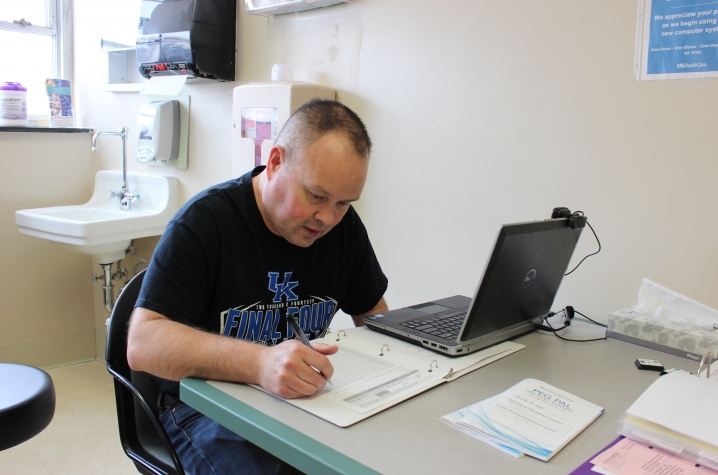 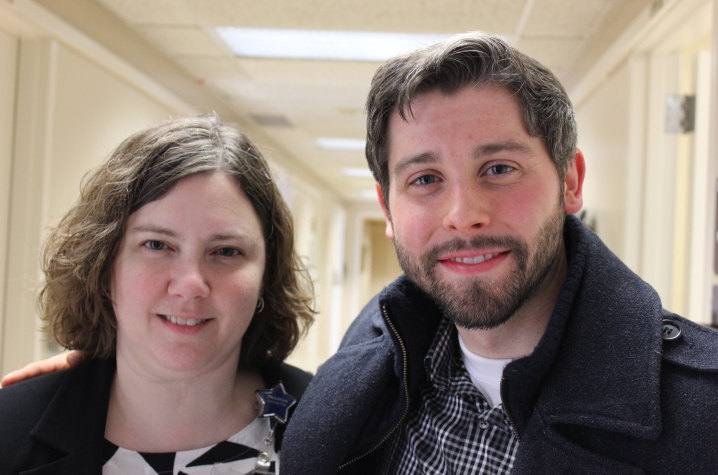 LEXINGTON, Ky. (March 22, 2016)  — In his 46 years, Gordon Lester has never experienced the satisfaction of ordering his first-choice item off a restaurant menu.

The native of Russell Springs, Kentucky, has never bit into a crunchy chicken wing or savored a hamburger hot off the grill. He’s resisted flavorful foods and missed out on memorable family meals because his wellness and mental capacity depended on it — until now.

For Lester, a patient with a rare genetic disorder, Phenylketonuria (PKU),  protein in the smallest amounts is a poison. Patients with PKU lack the enzyme to break down an amino acid found in protein. When the metabolic syndrome isn’t managed through dietary restrictions, amino acids called phenylalanine build up in the patient’s blood stream and become toxic to the brain. The disease degrades an individual’s cognitive capacity, resulting in a reduction of IQ points over time, as much as one to two points per year, and causing a number or side effects, including moodiness and loss of concentration. If the condition is not diagnosed and managed early in life, patients will suffer from severe psychiatric disorders, including mental retardation.

Each patient’s ability to break down protein varies, but most patients must adhere to a strict low-protein diet of fruits, vegetables and a metabolic formula to prevent the deterioration of cognitive abilities and the onset of psychiatric disorders.

Now, after returning to the clinic where he received treatment for PKU as a child, Lester is increasing his intake of protein without fear of the adverse effects of his disease.

Since November 2014, Lester has participated in a Kentucky Children’s Hospital (KCH) clinical trial testing an aggressive enzyme therapy to help PKU patients tolerate higher levels of protein. KCH is one of multiple sites around the nation participating in an experimental trial testing the safety and efficacy of a Biomarin pharmaceutical that reduces concentrations of phenylalanine in the bloodstream. In the time he’s received incremental dosages of the potent therapy, Lester’s tolerance for protein has increased from about 8 grams per day, or the amount of protein in an 8-ounce glass of milk, to 35 grams a day, or about the amount of protein in a small piece of meat.

Last month, Lester’s enzyme levels were high enough for his enzymes to break down a cheeseburger. His wife and two children piled around the dinner table with camera phones ready to capture Lester’s long-awaited first bite of beef.

“It’s a whole new world for me,” Lester said of his menu options. “And not one I thought I would have the chance to have in my lifetime.”

One of the oldest PKU patients to participate in the trial, Lester has encouraged others with his condition to return to KCH to receive the progressive treatment, which he credits with allowing him to have more flexibility in his diet. Dr. Stephen Amato, a genetic metabolic specialist at KCH who serves as the principal investigator on the clinical trial, and his study team faced the logistical challenge of bringing adult patients back to KCH to participate in the trial. After adjusting to their condition as children, many PKU patients treated at KCH as children drifted away from their original point of care. Fewer than 20 percent of PKU patients nationwide receive regular clinical care, and even fewer follow the restrictive diet as adults.

Study recruitment stemmed from the KCH metabolic team’s previous efforts to “reclaim” patients who had fallen off the grid. Metabolic dietitian Nicole McWhorter and Angela Crutcher, a nurse practitioner in the clinic, accessed decades-old medical records in a long effort to personally contact patients to present the opportunity to volunteer for the trial.

Out of 150 pediatric medical records, the team was able to contact about 50 PKU participants. Volunteering for the trial was an intensive and time-consuming process spanning three years. The KCH pediatric clinic first screened participants, and eligible participants started with a daily injection of the enzyme therapy in 2013. Those patients who responded positively to the treatment advanced to the next stage of the study, which involved the continuation of daily dosages as well as cognitive tests and psychological counseling. Clinical and regulatory aspects of the study were conducted through the UK Center for Clinical and Translational Science, whose ability to support a trial of this size and complexity was critical, Amato said.

While many PKU patients lost contact with the KCH clinic, some continued receiving treatment at KCH into adulthood. One of those patients, Chase Herndon, was studying psychology at UK when he learned about the innovative trial coming to KCH in 2013. Herndon attended PKU summer camps at Lake Cumberland and remained in contact with many of his former camp friends and PKU families through social media groups. He also worked as a camp counselor at a summer camp, mentoring youth who struggled to adhere to their diet during a period of growth, temptation and peer pressure.

Herndon, whose cognitive abilities suffered when he went off the diet during high school, felt an obligation to help others with the condition preserve their wellness and maximize their potential in life by encouraging adherence to the PKU diet. When he returned to the diet, he pledged to never again trade his future career and productivity for the short-term gain of a cheeseburger.

“I like to think of myself as a quick-witted guy, and I had taken a step or two back from that,” Herndon said of going off his PKU diet in high school.

Herndon was excited to learn about the KCH clinical trial testing a treatment he considered the “closest thing to a cure” for PKU. But he wasn’t eligible to volunteer for the study because he was experiencing success with another therapy and his levels of phenylalanine in his blood were too low to participate in a study designed for patients with high levels of intolerance. Herndon’s fidelity to the PKU diet rendered him ineligible for the trial.

“The reason it was so enticing is, my (phenylalanine) levels could be at a level I’ve never seen, except when I was a baby,” Herndon said of the new therapeutic. “I joked and said I was going to go eat a box of Kentucky Fried Chicken just to qualify.”

Even though he wasn’t a candidate for the trial, Herndon wanted other PKU patients in Kentucky to have the opportunity to improve their quality of life by volunteering for the study. Fulfilling an internship credit for one of his classes, Herndon volunteered as a research assistant in Amato’s pediatric clinic during the spring semester of 2014. His primary role was assisting the metabolic team in recruiting adults who were once treated as children for PKU but had since lost contact with the clinic and their pediatrician. The study team gave Herndon a list of former patients to call, and he already knew many of the individuals on the list through his PKU social networks.

In speaking with fellow patients about their lifelong struggles with PKU, Herndon learned many PKU patients abandoned their rigid diet at some point in adulthood, giving way to cognitive and behavioral dysfunction. He came across heart-wrenching stories of irreparable damage cause by the mismanagement of the condition. One patient’s neglect of the PKU diet caused serious birth defects in her children. But his fellow PKU patients also inspired him with their stories of sacrifice. Herndon motivated patients to enroll in the study, urging them to consider the potential long-term gains of the therapy rather than the temporary burden of aggressive treatment. Through the recruiting efforts of Herndon, Crutcher, and McWhorter, KCH recruited the third-most participants of any site collecting data for the national trial.

“It’s allowed me to understand where people are coming from and not be judgmental,” Herndon said of his role in recruitment. “Some people wanted to get off the phone, and some people just didn’t care. I tried to be really down to earth and maybe talk about some of the struggles I’ve had. I tried to give them my background and where I was coming from.”

Through his recruitment role, Herndon gained a greater appreciation for those people who held him accountable to the PKU diet throughout his life, especially his parents and PKU role models like Gordon Lester. Herndon said Lester personified toughness in confronting the limitations of his disease. As a young PKU patient, Herndon heard stories about Lester — a teenager at the time — pricking his own foot without hesitation to draw blood and check his levels. After that, Herndon started to believe people who suffered from PKU were not weak and vulnerable, but tough and resilient.

As a youth, Lester couldn’t break down the minimal amounts of protein found in most foods, consuming about 5 or 6 grams of protein per day growing up. With his family and pediatrician at KCH as his support system, Lester pushed forward in life, determined to achieve in academics and a career despite the looming threat of losing his cognitive abilities should he stray from his diet. Despite his lifelong struggle to maintain the diet, Lester graduated from Western Kentucky University and now works as a resource director for the local school system.

“A lot of people have different issues in their life — mine is as simple as not being able to eat what you want to,” Lester said. “Something that is so simple to one person might not be so simple for the other.”

Herndon has also maintained his cognitive abilities through his commitment to the PKU diet and clinical therapies to treat the condition. He graduated with a psychology degree in 2014 and plans to apply to graduate school to study evolutionary psychology. Through his experience with the clinical trial, Herndon learned that personal change must originate with each individual. Still, through his involvement with the study, he knows he presented many PKU patients with the chance to experience a better — or at least tastier — lifestyle.

“What I was trying to preach to them is, ‘you can get back on track — this is a breakthrough drug, and you can possibly be part of the study,’” Herndon said. “You have to spark something inside of them to want to be better.”