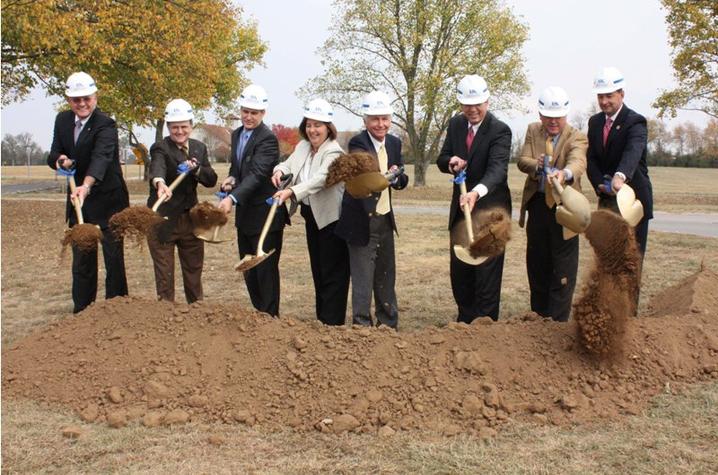 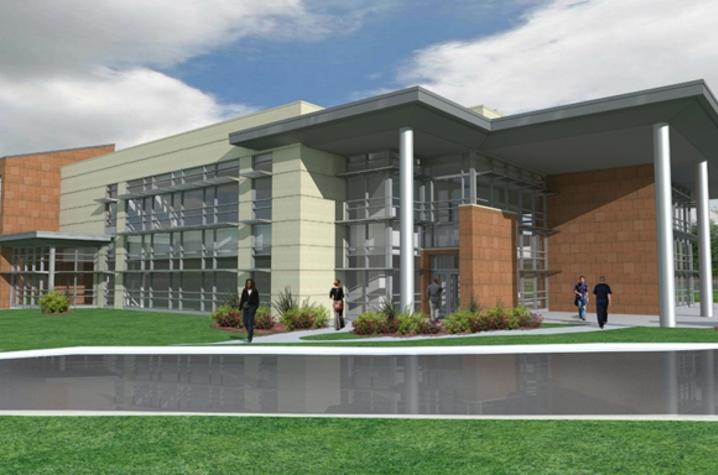 Architects, researchers and engineers were on site at the groundbreaking discussing and demonstrating what will go into making the 43,000 sq. foot lab UK's first LEED-Gold laboratory building. The facility will be a living laboratory with interpretive displays and activities for school children, visitors and the general public related to the building's energy consumption and the technologies and research that will be conducted there.

The facility is being funded by a competitive grant CAER won last year from the U.S. Department of Commerce's National Institute of Standards and Technology (NIST) under the American Reinvestment and Recovery Act's (ARRA) NIST Construction Grant Program. The award consisted of $11.8 million in federal funds, with matching resources of $3.5 million provided by the Commonwealth of Kentucky and $1 million from UK. An additional award of $3.5 million in state ARRA funds has also been provided by the Department of Energy Development and Independence to achieve LEED certification and insure this new laboratory is a model for energy efficiency and renewable energy technologies.

"The NIST funding will make a tremendous difference in the energy research capabilities of CAER," said Rodney Andrews, CAER director. "It is allowing a major expansion of research space for the center, which has been a critical need, and could not have come at a better time as our renewable energy and energy storage programs have continued to expand over the last couple of years."

Also attending were representatives from Argonne National Lab, as the laboratory will complement and create important collaborations with the recently announced Kentucky-Argonne Battery Manufacturing Research and Development Center to be located adjacent to the facility. An agreement is in place with the Commonwealth of Kentucky for the shared use of the new facility, with portions of the laboratory purposely designed and specially equipped to accommodate capacitor and battery manufacturing research and development.

Kentucky Governor Steve Beshear said, "Kentucky is poised for great things, and I strongly believe establishing a high-tech industry such as the Kentucky-Argonne Battery Manufacturing Research and Development Center will be the catalyst for strong economic growth as we begin to emerge from these difficult times."

Together, CAER's new laboratory and the Ky-Argonne Battery Center will help greatly increase the amount of federal and private research dollars coming to Kentucky and will lead to additional high-paying, high-tech jobs. The opportunities for collaboration between the Argonne facility and the university will provide an economic engine that will benefit Kentuckians across the region.

"This new facility will provide our world-class researchers with the leading-edge tools they need to push the edge of energy research," said UK President Lee T. Todd Jr. "UK is Kentucky's leader in energy research, and this new building will allow us to discover new knowledge and breakthroughs that will have long and lasting impacts on Kentucky, the nation, and the world."

Established 35 years ago, the CAER is a multidisciplinary research center focusing on energy-related industries particularly important to the state of Kentucky. In addition to well-known research programs in support of the coal and electric power industries, the center has expanded over time to address issues in carbon management, electrochemical energy storage, biomass energy and biofuels, and other renewable energy systems. The center, through its technology and innovation and service to the community, contributes to improving the lives of the nation’s citizens by creating jobs and economic opportunities; by sustaining vital industries and public services; by improving energy efficiency and protecting the environment; and by providing for the nation's energy independence. The center also has the important and abiding obligation of teaching and training students to compete in a global economy to address the acute shortage of scientists, engineers, skilled plant operators, and technicians that will be needed to sustain emerging and advanced energy technologies and industries.