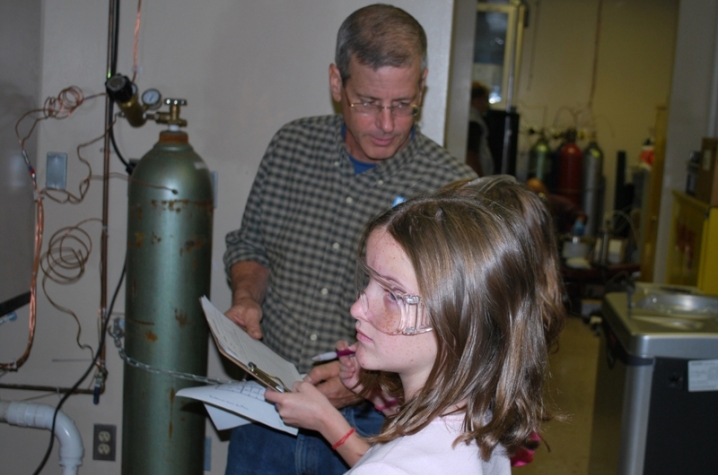 LEXINGTON, Ky. (Dec. 2, 2010) - The University of Kentucky Center for Applied Energy Research (CAER) recently had an energy audit performed on its building and was given many recommendations on ways to be more efficient. The auditors? Six students from Scott County Middle School's energy club.

This was the students' first energy audit outside of their school building. Working in groups of two students per floor (each accompanied by two CAER staff members), they evaluated each lab, closet, bathroom, hallway, and office in the three floor, 30,000 square-foot building. The young energy auditors assessed the lighting by counting the number, type and luminosity of lights, in addition to appliances, computers, monitors, and printers. While still on site, Doug Keaton, a social studies teacher and manager of the energy-audit program for Project NEED (National Energy Education Development Project), loaded the data into a spreadsheet, which showed how energy in-efficient the 1970's era building is.

Keaton and Chad Wallace, an energy club representative at the students' school, pulled all the numbers together. The easiest (and cheapest) fixes are the obvious ones. Turn out the lights when not in the offices or labs; close lab hoods when not using them; turn off monitors at night; and change some of the light fixtures for newer, more efficient ones.

The energy audit student project came about as a result from when CAER staff members had worked with Keaton on an energy-efficiency materials engineering project two summers ago when teaching at the Russell Area Technology Center.

Keaton became director of Career and Technical Education with Kentucky NEED in 2009. The NEED program was developed for providing balanced energy education for grades K-12. Kentucky NEED and the Kentucky Department of Energy Development and Independence have provided funding in the state for student energy teams. Various school districts decide on whether to have energy groups based on energy management plan. Of the state's 175 school districts with energy management plans, 80% include energy audits and student-run teams, sometimes called "Go Green Teams." They coordinate tasks with science teachers to develop energy teams in schools.

Wallace accompanied Keaton on energy tours over the last two summers. His passion for the environment and energy efficiency led him to become the energy coordinator at the Scott County School, where there are 15 students in the club. They meet after school to learn how to do an energy audit and began by auditing their school and presenting information and recommendations to the administration.

Keaton says the reason for focusing on middle school students is easy. "We want this to be a career focus for middle school kids. By the time they get to high school, it is too late."

--The Center is using 5% more energy than last year. Of the total energy used, 48.5% comes from the things we plug into the walls (excluding lab equipment).

--The foot-candle measurement (the amount of light that actually falls on a given surface) showed almost every room was over-lit, but not by much. For instance, the recommended foot-candle measurement for labs is 50, compared to the CAER's average of 62; and for reading areas of offices we overdid the recommendation of 50 by an extra 20. Where the students really encountered extra illumination was in the conference room where the foot candles measured 70, compared to the recommendation of 30.

--According to the students, if the 165 computer monitors were turned off at the end of the day, it would save $15,000/year and an additional $10,000 by shutting off the computers at night.

The CAER's Sustainability Committee will review these recommendations and determine what is reasonable, affordable, and do-able.