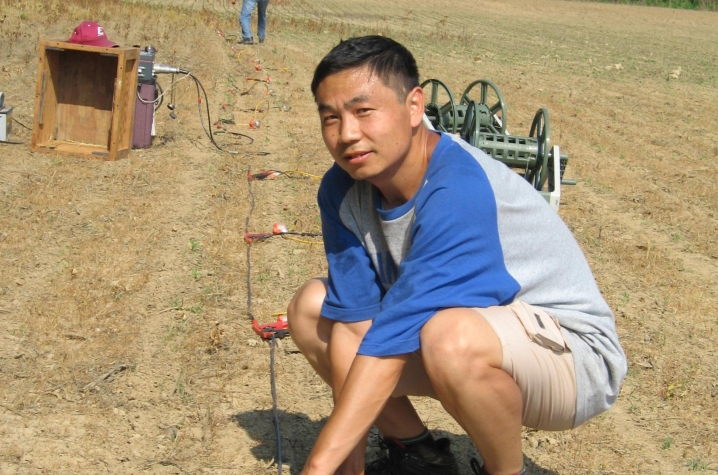 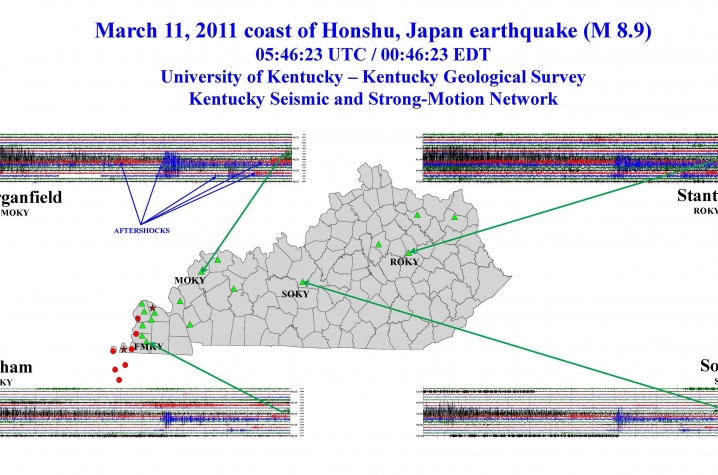 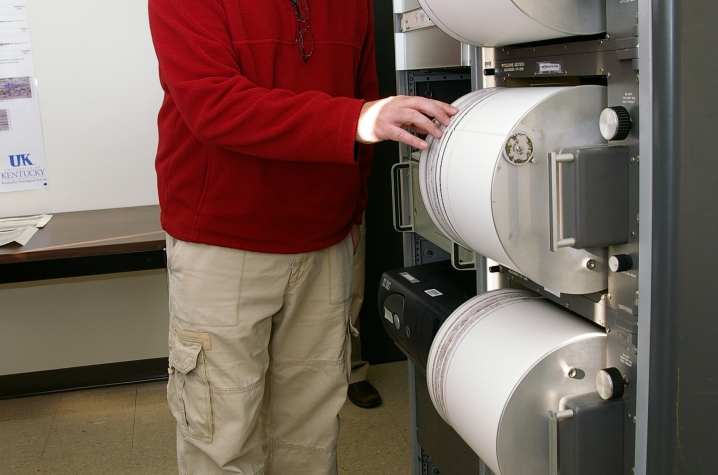 LEXINGTON, Ky. (Feb. 6, 2012) — Feb. 7, 2012, marks the 200th anniversary of the last and possibly strongest event of a series of very strong earthquakes that shook eastern North America in the winter of 1811-12. The events occurred on what became known as the New Madrid Seismic Zone (NMSZ), located along the Mississippi River in northeastern Arkansas, southeastern Missouri, northwestern Tennessee, and western Kentucky.

Because seismic instruments were not available at that time, today's seismologists can only estimate what the likely magnitudes might have been, based mostly on eyewitness accounts and newspaper reports from that time. The magnitudes of the three largest shocks ranged between 6.8 and 7.7 on the Richter scale, which also didn’t exist at the time of these events.

Two departments at the University of Kentucky, the Kentucky Geological Survey (KGS) and the Department of Earth and Environmental Sciences (DEES), are working together to research the hazard posed by earthquakes in the central U.S. that includes the NMSZ; the Wabash Valley Seismic Zone of Illinois and Indiana; and the East Tennessee Seismic Zone. These are seismic zones that could have an impact on Kentucky.

The absence of earthquakes of magnitude 6 or greater is one of the factors limiting the ability to derive a conclusion about the level of hazard from central U.S. earthquakes. Earthquake hazard assessment in Kentucky and the central U.S. is challenging and makes it difficult to develop policies to mitigate the hazard. However it is only prudent to stress that all Kentuckians, Kentucky businesses, and government agencies should know the safety procedures and be prepared just in case an earthquake occurs.

In the past 100 years, the largest shaking to be felt in Kentucky was from a 5.2M earthquake in Sharpsburg in 1980. Approximately six other earthquakes ranging from 4.0M to 5.8M have been felt in Kentucky in the past 30 years. No injuries and only minor damage to property has occurred in Kentucky in this time. In contrast, California has had five earthquakes ranging from the 6.9M Loma Prieta quake of 1989 to the 7.8M earthquake in San Francisco in 1906 with great loss of life and great damage to property.

California is in an active tectonic zone where the interactions of oceanic and continental plates create large measurable forces that cause earthquakes. The geology of the central U.S is much more subtle and not an active tectonic zone, making this region less likely to experience a large earthquake.  There are occasional references to the next "Big One" in the context of the NMSZ, but there is no scientific evidence that this region is due to have a large earthquake. It is currently estimated based on scientific data that large earthquakes on the NMSZ occur on the order of 500 to 1,000 years apart, on average.

Because the hazard, however uncertain, does exist for the NMSZ, KGS and DEES operate the Kentucky Seismic and Strong-Motion Network, an array of seismic instruments around Kentucky which records earthquakes in this region and major earthquakes around the world. Researchers at UK also study geologic structures in the state that may have resulted from pre-historic seismic events in order to determine the actual hazard level and improve understanding of the recurrence interval between strong earthquakes.

The UK researchers are working with other scientists, engineers, and federal, state, and local government agencies to develop appropriate mitigation policies for the state.  These include seismic design for bridges and buildings; Kentucky’s building codes; and designs for landfills to resist seismic effects.

In addition, UK has cooperative research with the China Earthquake Administration, exchanging information, scientific visits, and researchers in an effort to better understand earthquake hazards in both the central U.S. and China.

More information on earthquake research and links to near-real-time recordings of earthquakes from the seismic network are available at www.uky.edu/KGS/geologichazards/index.htm.

Information on earthquake preparedness for families and businesses can be found at this Web site: kyem.ky.gov/programs/Pages/EarthquakePlanning.aspx.