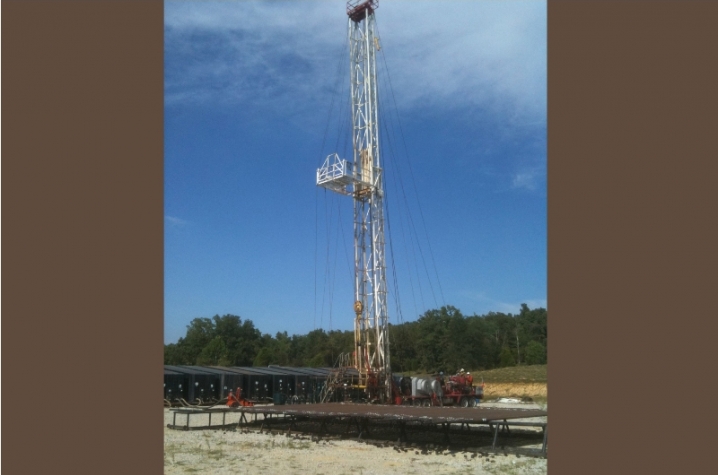 LEXINGTON, Ky. (September 7, 2010) − A second phase of carbon dioxide storage testing is about to begin at an 8,126-foot deep well drilled in Hancock County, Ky. The research well was the site of the injection last summer of 18,454 barrels of brine and 323 tons of CO2 into the pore spaces of the deep geologic formations penetrated by the test well. That project, conducted by the Kentucky Geological Survey at the University of Kentucky and several private-industry partners, was mandated and partially funded through legislation approved by a 2007 special session of the Kentucky General Assembly. It focused on testing the feasibility of permanently storing carbon dioxide generated from industrial sources deep underground in western Kentucky.

The new phase of research work was made possible by a U. S. Department of Energy award from the American Recovery and Reinvestment Act as part of a four-state regional study of the Knox and St. Peter geologic formations administered by the University of Illinois. $1.6 million was subcontracted to KGS for additional research at the Hancock County well and elsewhere in western Kentucky over a three-year period. The research includes:

--Additional analysis of rock samples taken earlier at both this well and others in the region to learn more about their ability to permanently store injected CO2  underground;

--Additional injection of CO2 and brine into the well and seismic monitoring of the CO2 after injection;

--Analyzing additional seismic data to model the porosity of the Knox formation rocks in other parts of western Kentucky;

--Modeling the geochemical reactions between CO2, fluids, and rocks in the Knox to allow prediction of the long-term behavior of injected CO2;

--Analysis of fractures and faults in the deep geology for their effects on injected CO2.

The ability of deep rock formations to accept and permanently store CO2 is an important element of carbon capture and storage (CCS) technologies. These developing technologies are intended to significantly reduce the emission of CO2 into the atmosphere from coal-burning electricity generation plants. The second phase of research at the deep well in Hancock County is expected to last until about September 30. A rig for the new work in the well was set up this week. After the work is completed, the well will be permanently sealed and the site restored to its original condition before the research began.