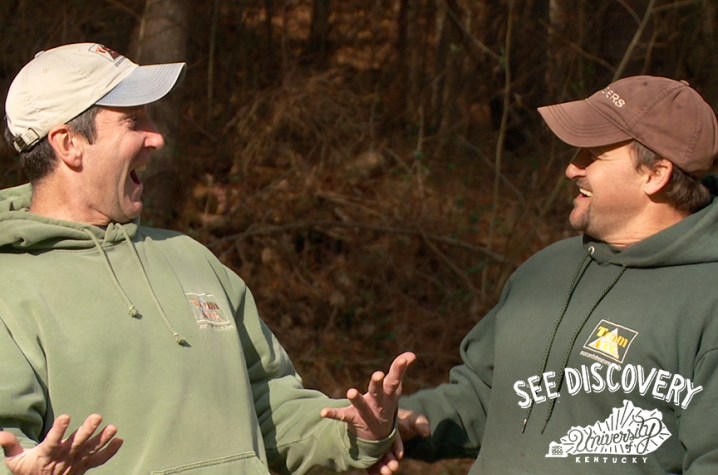 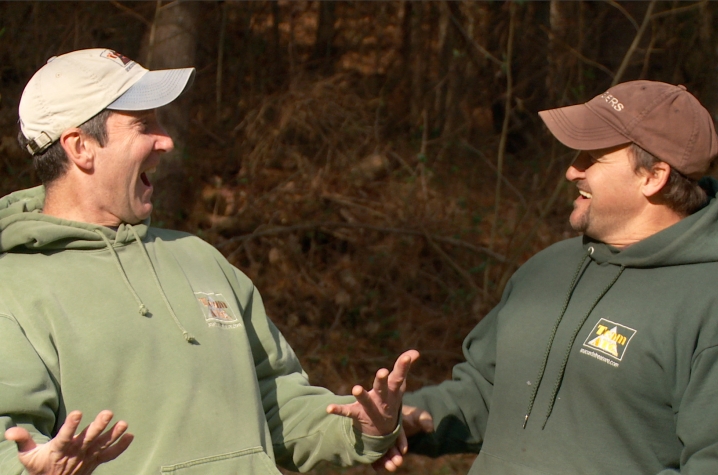 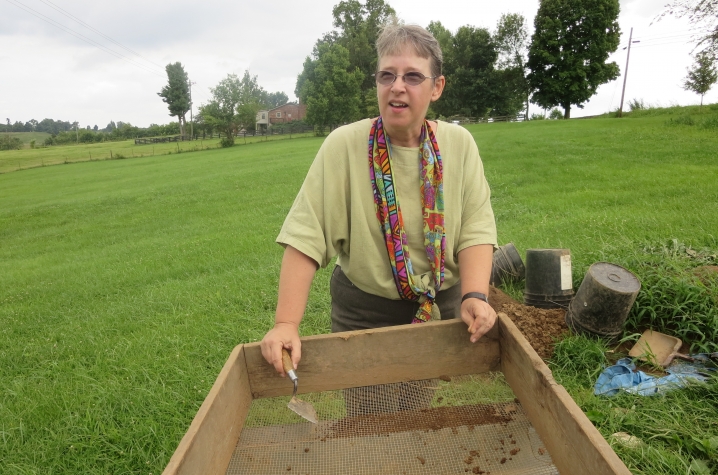 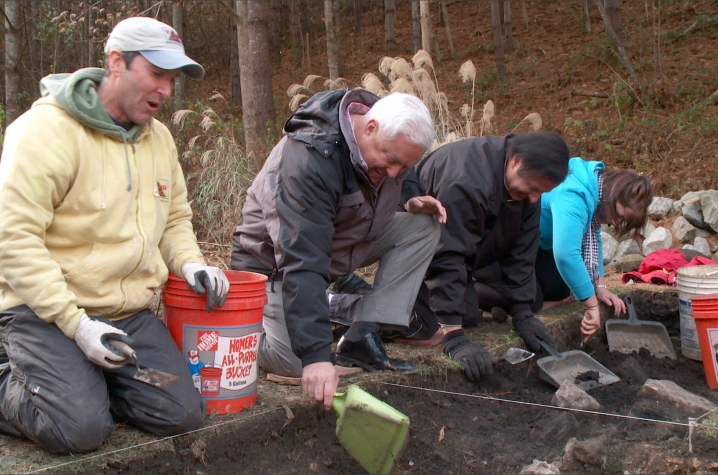 LEXINGTON, Ky. (July 31, 2015) — Descendants of both families formally agreed to an end to the infamous feuding of the Hatfields of West Virginia and the McCoys of Kentucky on a national morning news program in 2003. In truth, the families have gathered often in the Tug Fork River valley, site of the McCoys’ former homestead where the vendetta reached its bloody crescendo Jan. 1, 1888. Today, the McCoys’ former property is owned by Bob Scott, a Hatfield descendant, and the Hatfield-McCoy clan gatherings there are respectful and peaceful, even celebratory and life affirming.

Such was the atmosphere in November 2014 when members of both clans convened at the old homesite outside Hardy, Kentucky, near Pikeville. The Hatfields and McCoys were there to welcome the return of “King” George Wyant and Tim “Ringy” Saylor, stars of National Geographic Channel’s “Diggers” series. The 2014 excavation was the diggers’ second visit to Pike County; they had promised to return to the Tug Fork River valley after their first successful excursion two years earlier.

Thanks to the funding from National Geographic, Pike County Tourism and the City of Pikeville, the two amateur relic detectors were accompanied by a full team of professionals, led by historic archaeologist Kim McBride of the University of Kentucky Department of Anthropology’s Kentucky Archaeological Survey (KAS). The families came to share their histories, but before very long, the diggers, the archaeologists, the Hatfields and the McCoys were all on their knees, digging in the icy mud ‒ history hunting, mountain style. Soon, excited calls echoed off the hills as one broken, rusted relic after another was unearthed.

Video Produced by UK Public Relations and Marketing. Special thanks to National Geographic Channel for footage used in this video. To view captions for this video, push play and click on the CC icon in the bottom right hand corner of the screen.  If using a mobile device, click the "thought bubble" icon in the same area.

Featuring even more remarkable finds buried in the hills, the second Hatfield/McCoy episode airs at 10:30 p.m. Monday, Aug. 10, on the National Geographic Channel. For a preview of the Diggers upcoming Hatfield-McCoy episode, visit http://channel.nationalgeographic.com/diggers/episodes/the-real-mccoy

McBride expressed deep gratitude for the professionalism of the amateur diggers and their production company, Half Yard Productions, for continuously consulting with the trained experts on how and where to excavate and film. State and federal laws govern how and where metal detecting may be done on state or publicly owned property. Under the State Antiquities Act, collecting archaeological material on state, county or municipal property requires a permit from the Kentucky Office of State Archaeology.

“At first, it might seem like an unlikely partnership – amateurs and professionals ‒ but the thing that bonds us is how we love digging in the ground and coming up with priceless connections to our past,” said McBride. “Discovering hold-in-your-hand proof, confirming fireside tales of generations: that’s exciting for professionals and amateurs alike. I also love to work with descendant communities; so Hatfields and McCoys together, preserving their history, was very special.”

Wyant and Saylor made their first visit to Randall and Sarah McCoy’s valley in 2012, for the inaugural season of “Diggers,” the wildly popular series. When their metal detectors found musket balls and primitive bullets on the hillside above the suspected site of the McCoy cabin, the diggers called the professionals of the Kentucky Archaeological Survey for assistance. KAS sent a team of University of Kentucky archaeologists directed by McBride to review the finds and further investigate the site. The bullets, nails, ceramic shards, broken glass, dressed stone and other artifacts found in the valley ‒ very common on domestic sites of the mid to late 19th century ‒ helped confirm the exact location of the cabin that the Hatfields burned to the ground during their last murderous raid.

The Hatfields and McCoys as well as the Pike County Tourism, Convention and Visitors Bureau, are hoping to see another influx of curious visitors. Since a History Channel miniseries and the first “Diggers” episode, thousands of visitors from 26 countries around the world have visited the Randall McCoy homestead.

“We look forward to the further boost in national interest in the Hatfields and McCoy feud,” said Tony K. Tackett, Pike County Tourism executive director. “Visitors can download our step-by-step Hatfield-McCoy feud tour brochure from our website, www.TourPikeCounty.com, or request the brochure be sent by mail and experience the history for themselves.”

Recovered artifacts will be on exhibit during Hatfield & McCoy Heritage Days, slated Sept. 24, 25 and 26 in Pikeville. The public event features a Hatfield-McCoy paintball tournament, live music, local crafts, the Ruff Tuff Endurance Race, a Smash the Pig demolition derby and much more. For more information, call 1-800-844-7453.

“We hope folks get curious about the feud again and want to visit its last battlefield. We couldn’t have been more excited with the new crop of feud artifacts ‘Ringy’ (Saylor) and ‘King’ (Wyant) discovered last fall,” said property owner Bob Scott.

“There are lessons to be learned here, lessons as valuable as they were in 1865 when the destruction of two families began. Before the Civil War, these two families had been close, the kind of close that grows between people who are isolated in the hills. Twenty-five years later, both families were mourning, scattered, dead or in jail. This family feud had no winner,” Scott said.

“That’s why it is with pride we assist Pike County Tourism and the beautiful city of Pikeville, Kentucky, in encouraging enthusiasts to come and visit the land of the famous family feud. It's a window of our past and a doorway to our future. Just remember the rules: no feuding/ no fussing,” he said.

Now that the community knows the exact location of the McCoy cabin with a wealth of artifacts to display, there is talk of rebuilding a replica in the valley as well as constructing a bigger local museum to hold their precious finds.

For a showing of the first recovered bits of history as well as a brief history of the vendetta, including clips from the History Channel’s miniseries about the families, visit http://www.cbs.com/shows/cbs_this_morning/video/2322304169/hatfields-and-mccoys-new-feud-evidence-unearthed/

The mission of the Kentucky Archaeological Survey is to provide a service to other state agencies, work with private landowners to protect archaeological sites, and educate the public about Kentucky’s rich archaeological heritage. The KAS is jointly administered by the Kentucky Heritage Council/State Historic Preservation Office and Department of Anthropology at the University of Kentucky.

A very brief, overly simplified history of the Hatfield-McCoy feud:

The clash between the two families began in 1865, as Union and Confederate veterans returned home. Devil Anse, the leader of the Hatfield clan who had fought for the Confederate Army, joined a militia called the Logan WildCats. Patriarch Randall McCoy’s brother Asa, who had fought for the Union, was murdered upon his return to Tug River. No one was arrested for Asa’s death, but it was commonly believed that the WildCats were responsible.

More than 10 years passed without another murderous incident, until 1878 when a Hatfield got into a land dispute with a McCoy. Although the Hatfields were awarded the land, bad feelings festered between the families, especially after Randall McCoy accused a Hatfield cousin of stealing one of his hogs. Local Justice of the Peace, Anderson Hatfield, ruled for the Hatfields on the testimony of family friend Bill Staten, who was later killed by two McCoys.

Events were further complicated by a love story worthy of Shakespeare. Randall McCoy’s daughter, Roseanna, fell in love with Devil’s son Johnse Hatfield. The affair ended badly, with Roseanna pregnant and Johnse married to her cousin, Nancy McCoy. Soon after the wedding, Devil’s brother, Ellison Hatfield, was attacked, stabbed and shot by three of Randall McCoy’s sons. The McCoy boys were executed on Hatfield property.

The violence approached its climatic end on News Year’s Day 1888 when the Hatfield clan burned down the McCoy homestead, killing two McCoy children and severely beating their mother as they ran from the burning cabin. The surviving McCoys left their family home, never to return. Hatfields involved in the raid were sentenced to life in prison that September.

A short time later, a large skirmish, called the Battle of Grapevine, took the lives of a few more clansmen on both sides, but the bullet-fueled feud was essentially over.

Ron McCoy, the great-great-great-grandson of the patriarch Randolph McCoy, recently published a book about his family. For more information, visit http://www.hatfieldsandmccoys-reunion.com/ and http://www.webwire.com/ViewPressRel.asp?aId=197538