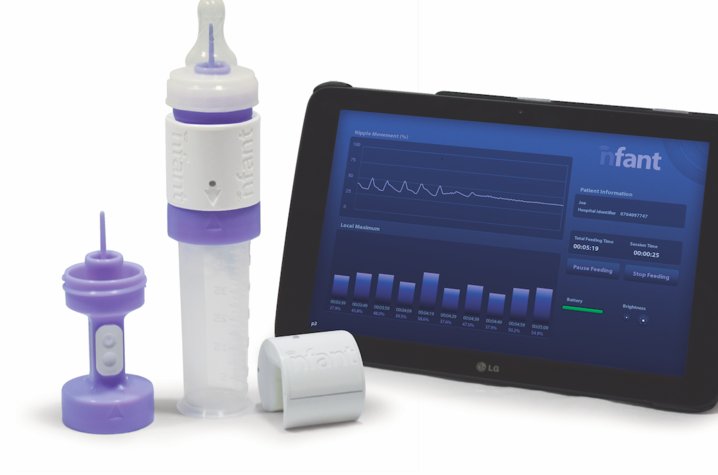 Lexington, Ky. (April 28, 2017) – Since the early days of her career, Gilson Capilouto, PhD, has been interested in pediatric feeding, but it wasn’t until she joined the University of Kentucky’s multidisciplinary team in the Neonatal Intensive Care Unit (NICU) that she became especially interested in feeding challenges for children who are born early or with illnesses. Around 15 million babies are born prematurely in the U.S. each year, and up to 70 percent of them, as well as about 10 percent of full-term babies, experience difficultly transitioning to oral feeding.

“My interest in neonatal feeding began in earnest when I came to UK 15 years ago. It seemed a natural extension of the work I was doing as part of the UK NICU multidisciplinary team, following high-risk infants after they’re discharged from the hospital,” Capilouto said.

Feeding is important for a baby’s nutrition, of course, but it also has implications for long-term development and eating. Neonatal sucking is considered the most complex behavior of a newborn. Research suggests that infant sucking may provide an early window into the overall integrity of the central nervous system, possibly predicting long-term neurodevelopmental outcomes. Studies have shown that early sucking correlates with overall development at six months, one year and two years. Infant feeding problems can also spill over into eating difficulties with solid food, especially in cases where feeding might have been an unpleasant experience during infancy, and can cause great distress for caregivers.

Skip ahead a few years, and Gilson and her business partner Tommy Cunningham, PhD, now run an award-winning company, NFANT Labs, LLC, based on a device they developed to measure the strength and coordination of an infant’s ability to suck. The device, called the nfant Feeding Solution, is essentially a “smart” baby bottle that uses low-energy Bluetooth technology and a mobile app to provide immediately actionable information about what’s going on with an infant’s feeding. It displays the impact of feeding interventions in real time, tracks and charts infant progress, and creates a continuity of care among caregivers. It’s also the first “internet of things” medical device cleared by the Food and Drug Administration for use in the NICU. (You can see the device here.)

The journey began as a simple research question that came to Capilouto during a continuing education conference focused on feeding preterm and sick term infants in the NICU.

“This whole thing started when I was attending a conference and the speaker was talking about the fact that for adults who aren’t orally fed for a while, their tongue muscle atrophies in a short period of time,” Capilouto said. “But we didn’t know if this was true in pre-term babies, who could go many weeks before they’re ever allowed to feed orally, sometime around 32-34 weeks gestation. So if baby is born at 28 weeks, for example, it will be many weeks before they can start to use their tongue muscle.”

When she got back to UK, Capilouto assembled a multidisciplinary team that could undertake the task of trying to measure infant sucking. The group included an expert in muscle biomechanics (Dr. Tim Butterfield, also in the UK College of Health Sciences), a muscle biologist, a clinical radiologist, and Cunningham, who at that time was at UK as a PhD student in biomechanics. An inventor with a couple patents under his belt, he’d also started a small engineering firm to help clinicians develop the tools they needed to conduct their research. His particular focus was, and remains, using evidence-based medicine to inform product development.

“Gilson came to me and Dr. Butterfield and said, ‘I need a bottle that can measure the strength of a baby’s tongue.’ She specifically wanted to be able to measure tongue strength during actual bottle feeding. Dr. Butterfield and I were intrigued by the challenge and after a couple of months, we had a proof-of-concept device."

With a grant from the Kentucky Science and Engineering Foundation in 2011, they developed and tested the device, hypothesizing that both tongue force and tongue size would be different between preterm infants beginning to orally feed and full term infants. Results of that first study provided support for their hypothesis, as pre-term infant tongue force was found to be significantly less than full-term infants relative to nutritive sucking; interestingly, simple pacifier sucking strength was not different between the two groups.

“When we got those results, we were pretty excited, we knew we wanted to continue this line of research, but we needed instrumentation that was more NICU-friendly. Ultimately we saw the clinical utility of what we were doing, so we wanted to build an instrument not just for research purposes, but also a tool that could be used in clinical practice at the bedside,” Capilouto said. “We knew we were on to something, but the methods were cumbersome — it required a bank of computers and four people to collect the data, and we knew for the long term that would not be feasible.”

Following release of the Intellectual Property from the University, Capilouto and Cunningham sought further funding from the Office of Research in the UK College of Health Sciences in 2012 to help them develop a second prototype that could be used bedside in the NICU.

“We leveraged a lot of technologies out there, like what’s in your cell phone, and built it on a scale to fit around a baby bottle so it could be easily incorporated to bedside work flow. We also wanted the final device to be easy to use and low cost. Millions of cell phones are made, so that drives down prices of the components,” Cunningham said.

Testing the second prototype provided the necessary confirmation for the new design and also provided important feedback about desirable features and characteristics from NICU bedside nurses. Armed with this information, Cunningham, who had moved to Atlanta after he finished his PhD at UK, left his job to devote himself full-time to development of the device. After rapid prototyping and validating the final device, Capilouto and Cunningham founded NFANT Labs, LLC, based in Atlanta, in 2013. The company has two patents and a third one pending. In the fall of 2015, the nfant Feeding Solution device was cleared by the FDA and that following January, Capilouto took a one-year, university-approved entrepreneurial leave of absence and relocated to Atlanta to work with the company. During this time, they were able to introduce the product in NICUs around the country and establish partnerships for conducting clinical trials. The company also developed, tested and launched a second product — a line of high quality silicone bottle nipples.

Currently, a novel methodology award from the UK Center for Clinical and Translational Science and the UK College of Health Sciences supports a research study to determine if the measures of sucking performance from the nfant Feeding Solution can be used to identify infants who are most likely to experience ongoing feeding problems after discharge. Dr. Peter Giannone, chief of the division of neonatology at UK, serves as co-investigator on the grant.

The study is following preterm infants who are at high risk for developmental concerns from hospital discharge through their first year. For those babies whose one-year developmental testing reveals cognitive or motor issues, the team will go back to data from their early feeding behaviors in the hospital in the hopes of identifying sucking performance variables that could possibly have predictive power.

“We want to identify babies who we are at risk for poor developmental outcomes as early as possible, so we can get them the help they need as soon as possible and take advantage of the mechanisms of neuroplasticity.” Capilouto said.

NFANT Labs has earned several accolades for its pioneering work. In March of this year, the Technology Association of Georgia, the state’s leading association dedicated to the promotion and economic advancement of Georgia’s technology industry, named nfant Feeding Solution as the Breakthrough Technology of the Year and NFANT Labs one of its Top 10 Innovative Technology Companies in the state. Last year, NFANT Labs was named a Silicon Labs "Internet of Things Hero" and also received Georgia Bio's coveted Innovation Award. In 2015, the company received the E-Achiever Award from the Lexington Venture Group.

With this strong foundation, NFANT Labs is experiencing rapid growth. To date, they have raised $3.5 million of private capital and are gearing up to raise another $5 million to expand their sales force, create additional products and take the company to the next level. The device is being used in NICUs across the country to assist healthcare teams in clinical decision making regarding a fragile infant’s transition to oral feeding. UK is currently in the process of purchasing and integrating it into their standard of care. It is also being used in several of the top children’s hospitals in the country to study important research questions, including the relationship between early sucking performance and neonatal brain injury.

Capilouto and Cunningham both emphasize the necessity of a team that takes advantage of multiple fields of expertise.

“To get us to this point, we assembled a distinctive interdisciplinary research team consisting of basic, translational and clinical investigators with expertise in pediatric feeding and swallowing, muscle physiology, muscle biomechanics, biomedical engineering, diagnostic radiology and neonatology,” Capilouto said.

Cunningham added that “the idea is just one thing. You need clinical research, executive leadership, capital backing, sales and marketing, manufacturing, etc. It takes a vast amount of resources to go from an idea to a sustainable business focused on improving patient care.”

As their company grows, the team hopes to broaden the use of the nfant Feeding System to learn more about feeding behaviors and neurodevelopment of specific groups of infants, as well as extend their capacity to support caregivers.