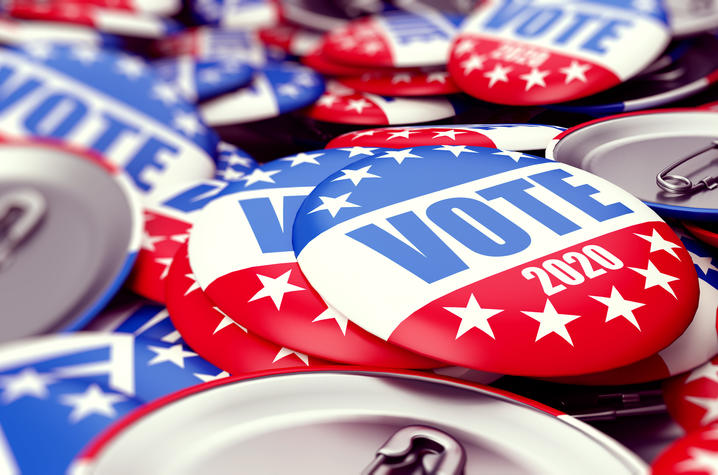 LEXINGTON, Ky. (April 28, 2020) — While the 2020 general election is still more than six months away, the COVID-19 pandemic has sidelined much of the presidential campaign. Meanwhile, state and county officials across the U.S. are already preparing ways to allow voters to cast their ballots safely.

University of Kentucky faculty members with expertise in politics have been closely monitoring the evolving situation.

In the Q&A below, Zilis, Voss and Douglas provide expert insight to help you — the voter — stay informed.

UKNow: When talking about the national opinion of candidates, has this crisis changed how people view both sides?

Zilis: It is very difficult to get a handle on how the pandemic has affected the standing of leading national figures such as (Donald) Trump and (Joe) Biden. In early April, Trump’s approval rating saw a slight bump. This may have been a result of something akin to a “rally around the flag” phenomenon, which historically occurs when presidents see their support increase during times of conflict and crisis. Recently, however, Trump’s approval rating has decreased slightly — putting it on par with where it stood in February and March. We also do not have enough polling to tell whether Biden has been helped (or hurt) by the pandemic.

UKNow: This political race has quickly changed in the past month, particularly in the Democratic Party nominee race, with Joe Biden emerging as the new presumable candidate. And much of this race’s media coverage has been sidelined to focus on COVID-19. Is this overshadowing the momentum of a few campaigns that, mere weeks ago, appeared very strong?

Zilis: The virus is certainly overshadowing political campaigns. For example, the announcement that Bernie Sanders was suspending his campaign received much less attention than it otherwise would have. In terms of momentum, however, much remains to be seen. If people ultimately judge Trump to have mismanaged the virus response, that could supply substantial momentum to Biden’s campaign. Alternatively, if people credit Trump for successfully navigating the virus and reopening the country in the coming months, that could strengthen his reelection claim come November.

UKNow: Will we see a drop in voter turnout due to fears over being among large groups of people at voting locations? (both at primaries and national in November)

Zilis: I believe that this strongly depends on the prevalence of the virus and concern over it come November. If we see a surge of cases and high rates of infection in the fall, this could prompt further emphasis on social distancing and dramatically lessen turnout. On the other hand, if the spread of the virus has slowed significantly, I would expect turnout to be in line with past elections or even — potentially — higher. Voters may be motivated to select a leader who can effectively guide us through the next crisis. Early returns suggest that turnout in the Wisconsin primary was not much lower than in past primary elections — aided by a surge in absentee ballots. To me, this indicates that many Americans are strongly motivated to vote but also concerned about their health and safety when doing so.

UKNow: When it comes to elections, who comes out to vote is just as important as how people vote. Does the coronavirus have the potential to significantly impact the size and makeup of the electorate and how?

Voss: It certainly does. Voter turnout matters when a candidate succeeds or fails at turning out their party’s base, which is to say whether they excite the voters who almost always support the party if they bother to show up. The devastating nature of COVID-19 among minority communities could whip up voters who otherwise might have stayed home.

UKNow: How might the impact of COVID-19 influence swing voters?

Voss: Most voters predictably support one party or the other — even if they claim to be independent. They give elections their consistency from one contest to the next. The actual swing voters act based on a mixture of two things. First, they prefer a candidate who is less extreme and less partisan. Second, they judge the president’s party according to how they feel the country has been doing. Both of these influences on the vote helped Donald Trump in 2016, but both could hurt him in 2020. Voters likely will view him as more partisan than they did the first time around — and aside from loyal Republicans — voters are not expressing satisfaction with the direction of the country.

UKNow: Has this international pandemic perhaps adjusted what issues voters are prioritizing in terms of selecting a candidate to support?

Voss: Voters like to talk about the traits of candidates, but in practice, a candidate’s personal traits rarely make a difference in elections. If you want to vote for a candidate, then you are more likely to view the candidate favorably — to see the person as intelligent or honest — and to prioritize the traits that you think your preferred candidate possesses. The exception might be in the middle of a crisis, when having a capable leader becomes more of a necessity. Both Trump and Biden face a powerful incentive to reassure voters that they could provide competent and politically neutral leadership.

UKNow: The presumptive Democratic nominee, Joe Biden, has publicly stated he is willing to extend help to President Trump over the phone. Are candidates putting politics aside to focus on what’s more important right now?

Zilis: We have seen some cross-partisan cooperation, at least initially. The Biden-Trump connection is one example, and we’ve also seen Democrats and Republicans come together in Congress and in Kentucky. Recently, however, there has been more partisan division, particularly when it comes to issues such as the reopening of businesses.

Voss: The great thing about democracy is that politics lets voters force their candidates to focus on what’s more important. We shouldn’t want them to put politics aside, because politics means seeking our votes. The best thing Trump can do to improve his electoral prospects is to handle the current crisis as well as possible. The best thing Biden can do to convince voters they ought to bring him in as a replacement is to show clearly how he would do a better job dealing with the current crisis.

Douglas: This is probably the question I've been asked the most over the past few weeks. No, the November general election date will not change.

First, Trump himself has no authority to postpone the November 3, 2020 election. The U.S. Constitution explicitly says that Congress — and only Congress — sets the date of the presidential election. Even a declaration of "martial law" does not change this fact and would not expand his powers to delay the election. Congress has passed several laws that dictate in detail the date of the election as well as the date when presidential electors meet. Further, the Constitution explicitly says that the president's first term will end on January 20, 2021 at noon.

Ultimately, the chance of Congress changing the date of the November election is slim to none, and that body is the only one authorized to do it.

Douglas: Kentucky's primary election was initially scheduled for May 19. Under Kentucky law, the secretary of state may recommend that the governor postpone an election by up to 35 days during a state of emergency. Secretary of State Michael G. Adams did just that, and Governor Andy Beshear accepted his recommendation. The new primary date is June 23. All other deadlines, like the voter registration deadline, have been adjusted accordingly. Thus, Kentuckians should make sure they are registered by May 26. Visit GoVoteKY.com to check your registration status.

In addition, the legislature just granted the governor and secretary of state additional powers during an emergency to alter the "manner" of an election, which will allow them to expand the use of absentee ballots. Kentucky is one of 17 states that requires voters to have an excuse to vote absentee, such as being out the country.

But the Secretary of State and the Governor just came to an agreement to allow all Kentucky voters to participate in the June primary using an absentee ballot based on a "medical emergency" due to the coronavirus. There will be an online portal to request a mail-in ballot. The state will mail an informational card to every voter in the state advising them of how to request an absentee ballot. In addition, voters who still want to vote in person may do so, either during an early voting period or on Election Day; voters can even make an appointment to vote in person if they want so they can avoid crowds. Ultimately, the state is trying to make it as easy to vote as possible while adhering to best practices on health safety. I was honored to be part of the conversations on how to make that happen and I provided a more complete summary of the changes here.

Finally, I'll end this written interview the same way I have been ending my emails: "Stay healthy and eat cookies."