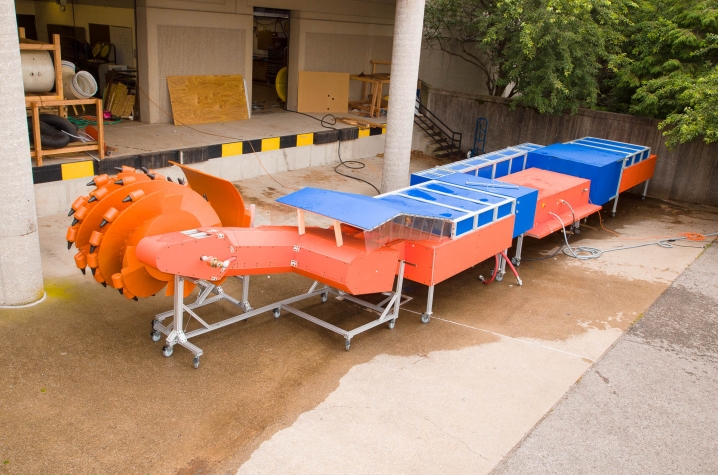 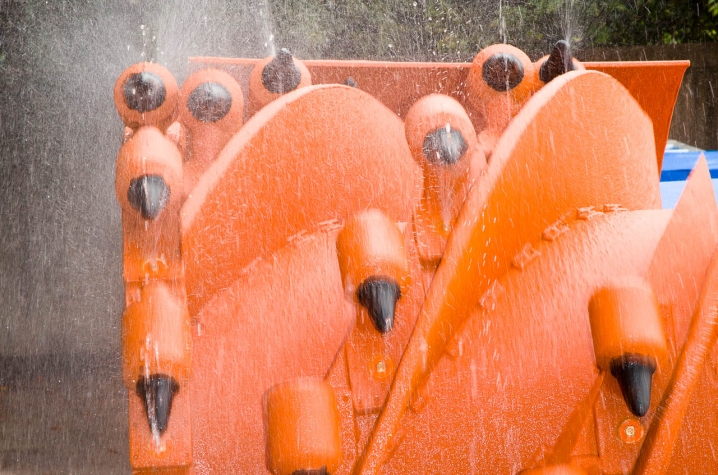 LEXINGTON, Ky. (June 9, 2016) — According to Thomas Novak, professor and Alliance Coal Chair in the Department of Mining Engineering at the University of Kentucky, approximately 50 percent of all coal produced in underground mines in the U.S. comes from a particular kind of underground mine called a longwall mine. While such mines are quite productive, they are not effective at reducing the amount of dust generated by longwall shearers, which extract the coal. Whether respirable dust, which is harmful if breathed over a miner’s career, or float dust, which carries the potential for an explosive dust cloud if the mine is subjected to an ignition of methane, dust is hazardous to safe and sustainable mining.

In an attempt to combat dust emissions, Novak and Assistant Professor Chad Wedding have created a full-scale model of a longwall shearer that features a fully functional scrubber system.

“Scrubbers aren’t new to underground mining,” explained Novak. “Continuous mining operations — which are different from longwall mining operations — have used what are called flooded bed scrubbers successfully for quite some time. Basically, we are trying to bring what we know works for one method of mining to another method that suffers from more difficult dust control.”

While both Novak and Wedding are mining engineering professors at UK, they bring expertise in other fields to this project. Novak received his undergraduate degree in electrical engineering; Wedding earned his in mechanical engineering. Novak designed the electrical and computer-control system for the scrubber and Wedding fabricated all of the components with the help of the college’s machine shop and used a 3-D printer to create a mold for the scrubber’s 32 cutting picks.

Because longwall shearers face vertical height restrictions, it is not possible to simply attach a scrubber onto an existing machine; therefore, Novak and Wedding have incorporated their scrubber into a new shearer design. Further, the placement of the scrubber is crucial. Because the dust must be captured before it is dispersed into the air and diluted, the scrubber inlet needs to be near the cutting drum, which cuts into the longwall face; however, if it is too close, large coal particles may clog the scrubber bed. Computational fluid dynamics (CFD) modeling played a critical role in helping the team place the scrubber’s large centrifugal fan and ductwork.

Based on CFD modeling, Novak and Wedding 3-D printed a small-scale version of the new shearer design. Then they went to work on producing the full-scale model, which is approximately 65 feet in length when assembled. This week, the team will transport the shearer to the Pittsburgh Research Lab of the National Institute for Occupational Safety and Health (NIOSH). There, they can test the scrubber’s capabilities in NIOSH’s longwall dust gallery.

“There wouldn’t be any way to test this prototype due to its size and the disruption it would cause to a mining operation,” Wedding said. “That is why it is important that we are able to use the longwall gallery at NIOSH, which closely simulates a longwall face. Currently, we are working on building a similar gallery for continuous mining in Georgetown, Kentucky.”

Funding for the project came from the Alpha Foundation for the Improvement of Mine Safety and Health Inc. with an in-kind donation of equipment from Joy Global and in-mine visits from Alliance Coal LLC.