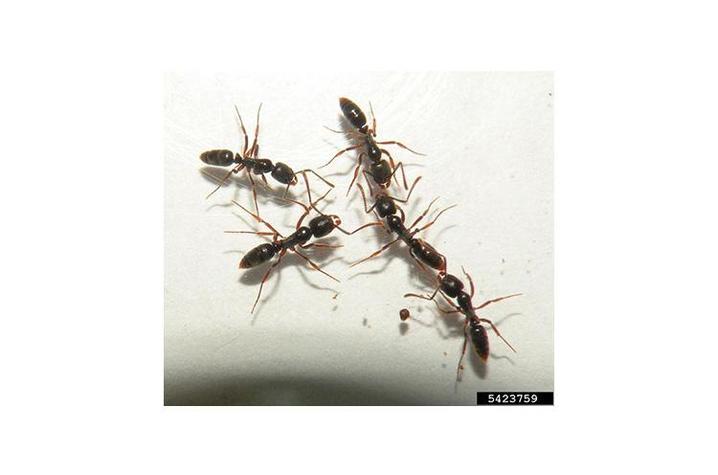 Asian needle ants have a powerful sting, but UK entomologists encourage people not to panic if they find them. Photo by Jessica Louque, Smithers Viscient, Bugwood.org.

LEXINGTON, Ky. (June 30, 2020) — University of Kentucky entomologists want people to be aware of a new stinging pest in the state, the Asian needle ant.

Recently, Asian needle ants invaded a home in south central Kentucky and stung the homeowner. This is one of the state’s first reports of the ants coming indoors. The insect has been in Kentucky since at least 2013 and in the U.S. since the 1930s. It is found throughout the state, but tends to stay outdoors, preying on other ants and termites. Like other insects who live primarily outdoors, they are most active during warmer months with populations declining as the weather gets cooler.

Fortunately, Asian needle ants do not tend to be aggressive and only sting when they feel threatened. However, the chances of a person getting stung greatly increase when the Asian needle ant moves indoors.

“Their sting is painful, and people report that they have a burning sensation paired with a pins-and-needles feeling for a couple of weeks after being stung,” said Jonathan Larson, extension entomologist with the UK College of Agriculture, Food and Environment. “Most people do not need to seek medical treatment if they are stung by an Asian needle ant, unless they have a known allergy to other insect stings, such as from a bee or a wasp. The literature suggests that the venom from this ant may be more hazardous than bee and wasp stings.”

Asian needle ants look similar to other ant species, but UK entomologists say the insect has some distinguishing features.

“This ant has a large stinger at the end of its abdomen, which is usually visible to the naked eye,” said Zachary DeVries, UK assistant professor of urban entomology. “The Asian needle ant is about twice as long as the odorous house ant but considerably smaller than carpenter ants.”

Not much information is available on effective Asian needle ant control, but DeVries encourages people who find the ants to not panic.

“Physically removing ants from the home using a vacuum cleaner will help prevent stings and provide immediate control, but given this ant’s ability to deliver a nasty sting, it may be worth contacting a licensed pest control company if ants are found,” he said.

If individuals discover the ants outdoors, they can use granular baits and target their nesting sites and other areas with high ant activity.

Kentuckians can make their home less appealing to ants in general by sealing up cracks and crevices, keeping their grass mowed, eliminating standing water areas and removing dead trees from their property.

UK entomologists encourage people who think they have encountered an Asian needle ant to submit a sample to their local office of the UK Cooperative Extension Service for identification.