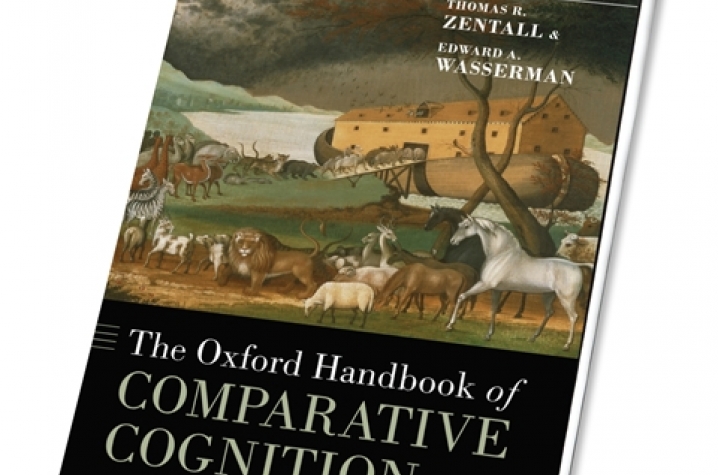 LEXINGTON, Ky. (May 17, 2012) — Visionaries often ask us to look skyward for signs of alien intelligence. A new book, "The Oxford Handbook of Comparative Cognition," edited by Thomas Zentall of the University of Kentucky Department of Psychology and Edward Wasserman of the University of Iowa, suggests that we might more fruitfully explore and understand alien intelligence right here on Earth.

This 960-page volume, published in February by Oxford University Press, is a compendium of scientific research into the cognitive worlds of animals, a flourishing field of study that that was prompted by Charles Darwin’s provocative proposal that humans and animals bear striking resemblances to one another—if suitable comparative investigations are conducted.

"To understand human behavior demands that we carefully distinguish human nature from that of other animals," Zentall said. "The more we investigate animals, the more we find that they possess many of the same perceptual, learning, and conceptual abilities as we do, if not always to the same degree."

All of this work follows a natural scientific approach, allowing researchers to record objectively measurable behaviors of sufficient reliability to go beyond mere suspicions of common mental processes in humans and animals. The upshot of this international research endeavor is that humans are not alone in being intelligent beings: all of the studied species exhibit either rudimentary or exceptionally well-developed cognitive systems that help them to adapt to complex and ever-changing environmental conditions. Some animals’ memory and navigation systems may even surpass humans'.

Uncovering similarities and disparities between human and animal behavior defines the general field of comparative psychology.

"The diversity of animal life exists not only in organisms’ outward appearances, but also in their mental functions," Zentall said. "Appreciating the diversity of intelligence is key to locating humans among all other animals and in gleaning the nature of mental evolution."

The specific subfield of comparative psychology that is concerned with cognitive processes in human and animal behavior is called comparative cognition. Comparative cognition falls squarely within the realm of natural science, and it is of vital importance to behavioral psychology and evolutionary biology. The continued experimental investigation of animal intelligence should greatly advance our understanding of behavioral adaptation and its evolution in the animal kingdom.

Indeed, when applied to human nature, the maxim “know thyself” might properly include comparative study. To know what it means to be human demands that humans carefully distinguish human nature from that of other animals — alien species, but nevertheless evolutionary kin.