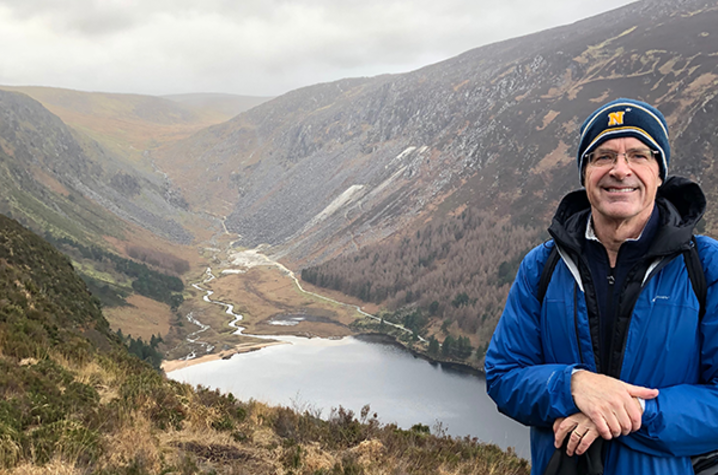 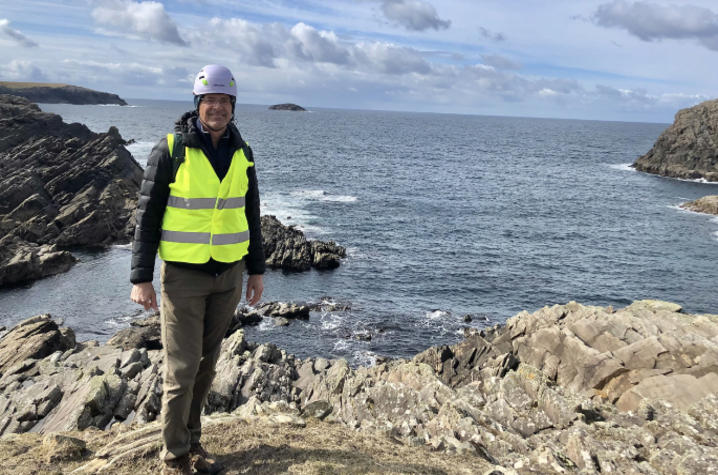 LEXINGTON, Ky. (Sept. 15, 2022) — Dave Moecher, Ph.D., a professor in the University of Kentucky Department of Earth and Environmental Sciences, recently returned from Ireland, where he spent five months studying the erosion of the Appalachian Mountains and exploring the unique culture and history of the Emerald Isle.

While collaborating on research with two Irish geoscience professors, Moecher and his wife, Amy Luchsinger (recently retired from UK), lived in suburban Dublin during their stay, immersing themselves in the Irish culture and traveling widely throughout the country.

The experience was made possible by the Fulbright Scholar Program, which supports immersive experiences in other countries for researchers, teachers, artists and professionals with the aim of producing mutual understanding of other cultures. The Fulbright Program was established in 1946 in the United States by legislation introduced by Arkansas Sen. J. William Fulbright, and it now operates in 155 countries worldwide. Since the program’s founding in 1946, 287 University of Kentucky faculty and 133 University of Kentucky students have been awarded Fulbright grants in support of teaching, research, and study in more than 70 different countries.

Funding for Moecher’s project was provided by the Irish Fulbright Commission and the Geological Survey of Ireland.

A UK faculty member since 1991, Moecher served as chair of the Department of Earth and Environmental Sciences from 2012-2019. He is also active in alumni development efforts for the department.

“We didn’t choose Ireland, I chose my two colleagues,” Moecher said. “We had mutual research interests.”

The work done by Moecher and his collaborators investigated how the Appalachian Mountains in North America were eroded over geologic time.

The Appalachians were formed by a series of tectonic events approximately 1 billion to 300 million years ago as portions of ancient continents and other land masses collided with each other forming mountains. The cores of these mountain ranges contained crystalline rocks which were subsequently exposed at the surface, weathered and eroded, resulting in detrital mineral grains being carried away into streams and rivers and eventually deposited in sedimentary basins. Some of these “first cycle” sedimentary rocks have themselves been uplifted and eroded producing later generations of recycled sediments.

Dating detrital minerals grains in sedimentary rocks from the Appalachian Basin can help unravel the recycling of older materials in younger rocks. Some minerals, such as quartz and zircon, resist breakdown during weathering processes and easily persist into later cycles of erosion. Dating detrital zircon grains with U and Pb isotopes helps geologists understand the ultimate sources of the sediments. New mass spectrometry techniques using tightly-focused lasers have been used to date large numbers of detrital zircon grains rapidly and easily.

Moecher and his Irish collaborators took a different approach in their sedimentary provenance study by focusing on another mineral present in Appalachian sediments: feldspar. Unlike zircon, feldspar is much less resistant during weathering and sediment transport, so it normally does not persist into later cycles of erosion. Dating of detrital feldspar grains is therefore useful in understanding shorter-term processes involving “first cycle” sediments, and ultimately, for determining how many cycles of erosion have occurred in mountain belts such as the Appalachians.

The results of their analyses confirm that sediment from the Appalachians has been through multiple cycles of erosion — perhaps as many as 10. A paper detailing their results has been submitted to the Journal of Geology for publication.

As part of his Fulbright, Moecher co-taught a course at Trinity College Dublin focusing on the geologic record of the Archean, one of Earth’s earliest geologic eons which lasted from 4 to 2.5 billion years ago. He also accompanied geology faculty and students from University College Dublin on a field trip to northwest Ireland to visit some of Ireland’s oldest rocks.

Moecher found the geology of Ireland familiar to regions closer to home in North America. Rocks in northwestern Ireland share the same geologic history with rocks forming the ancient core of the North American continent (a landmass geologists call Laurentia). Similarly, southern Ireland is part of the same landmass (a microcontinent named Avalonia) that was tectonically added to Laurentia and presently occupies parts of Newfoundland, New Brunswick, Nova Scotia, Prince Edward Island and northern New England. The two packages of similar rocks were contiguous before North America and Ireland were separated approximately 130 million years ago during the opening of the Atlantic Ocean.

While the rocks were similar, Moecher found the Irish system of higher education quite foreign to the educational system in which he has studied and taught.

“It’s very different,” he said. “The students have a few assignments during the course of the semester, but they have 10 days of final written exams. The high schools do this, too. Everything rides on these final exams, and nobody complains about it.”

As for the instruction, “the classes are very much lecture-based. They do have a lab component and activities, but it’s not as structured or regimented as it is in the U.S.,” Moecher explained.

As Moecher’s research focused on how sediments reflect the inherited geologic history of mountain belts, another focus of exploration was a parallel appreciation of the inherited cultural roots of the Irish civilization. To accomplish that, Moecher and Luchsinger traveled widely through the country, uncovering the history that seemed to underlie every aspect of Irish society.

“The religion correlates with the cultural traditions,” Moecher said. “The Protestant tradition went with the English influence, and the Gaelic tradition with the Catholic influence.”

Moecher learned that the deep roots of these traditions influence even mundane aspects of Irish life, including which sports children play during childhood: those from Catholic traditions grow up playing Gaelic football and hurling, while those with Protestant roots play cricket and rugby.

The long-standing cultural divide traces its origin to years of English military conquest, colonialism and oppression in England’s first colony. The divide flared up violently during the 30-year period of ethno-nationalist conflict, extending from the 1960s to the Good Friday Agreement of 1998, known as the Troubles.

“We knew about the Troubles, but we never understood the root cause, the deep resentment and the centuries of trying to achieve independence (from England),” Moecher said. “What struck us was how deep this was, how long it goes back and how it is still there today.”

Learning about the long and violent history of Ireland provided Moecher with a new appreciation for the Irish people.

“I really respect the Irish and what they’ve been through,” he said.

An invitation to future Fulbright scholars

Looking back on his five months in Ireland, Moecher wonders why he didn’t do something like this sooner.

“I wish I had looked into Fulbright earlier in my career,” Moecher said. “I really didn’t understand I could do this. Now I am telling people, go for it!”

UK faculty interested in the Fulbright Program for a future application should contact Tim Barnes in UK’s International Center at tim.barnes@uky.edu or visit https://international.uky.edu/pr/research/fulbright.