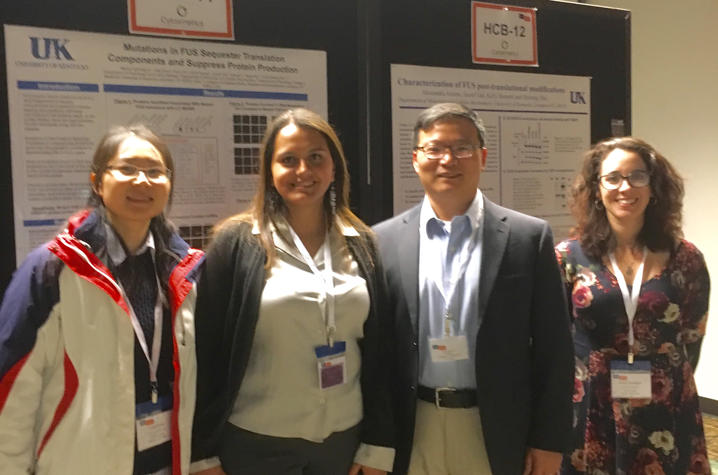 LEXINGTON, Ky. (Nov. 21, 2018) —Researchers at the University of Kentucky have discovered new biological processes by which mutations in the FUS gene cause neurodegeneration in amyotrophic lateral sclerosis (ALS).

FUS is a DNA and RNA binding protein that resides predominantly in the nucleus and appears to play a role in DNA repair and RNA metabolism. In contrast, ALS-related mutations cause the protein to accumulate in the cytoplasm, which can contribute to inclusion bodies – the pathological hallmarks of disease – and neurotoxicity.

A group led by Haining Zhu, a professor in the Department of Molecular and Cellular Biochemistry at the University of Kentucky, discovered that ALS-causing mutant FUS protein interferes with protein translation and related messenger RNA quality control, which ultimately leads to neuron death and ALS.

The group developed a new protocol to biochemically capture the dynamic mutant FUS-positive inclusion bodies and then identified protein components by proteomic approaches.

“Based on such proteomic data, we followed up with subsequent studies and were able to demonstrate that the ALS mutations in FUS indeed suppressed protein translation and altered the nonsense mediated decay (NMD) pathway, whose function is to reduce errors in gene expression," said Zhu. "Our findings provide an in-depth understanding of how RNA metabolism and protein translation are impacted by mutations in FUS and produce new insights into the disease-causing mechanism of FUS-ALS."

The findings were published in the Nov. 19 edition of the Proceedings of the National Academy of Sciences (PNAS).

ALS is a progressive neurological disease that affects the nerve cells in the brain and the spinal cord, eventually stealing from its victims the ability to walk, dress, write, speak, swallow and breathe. Most ALS patients die within five years of diagnosis, and there is currently no cure.

Approximately 15 percent of ALS cases are familial and mutations in the Fused in Sarcoma (FUS) gene contribute to a subset of familial ALS cases. This gene mutation is particularly cruel because while the average age of onset for ALS is about 65, people with a mutation in the FUS gene tend to get ALS in their 30s and 40s.

Even though a fraction of ALS is caused by faulty genes, Dr. Edward Kasarskis, director of the ALS Multidisciplinary Clinic at the University of Kentucky and co-author of the PNAS paper, believes that the work of Zhu and his colleagues provides important data that will inform study of idiopathic ALS.

"I share the belief of the larger scientific community that unlocking the mystery of genetic forms of ALS will provide insight into the other 80-90 percent of cases that have no known cause," he said. "Haining's work has tremendous impact on the entire ALS field."

This study was supported, in part, by National Institutes of Neurological Disorder and Stroke Grant R01NS077284, Muscular Dystrophy Association Grant MDA352743, ALS Association Grant 6SE340, and Department of Veteran Affairs Merit Review Award I01 BX002149 (to H.Z.). Support from the Multidisciplinary Value Program initiative at the University of Kentucky College of Medicine is appreciated. M.K. is supported by National Institute of Environmental Health Sciences Training Grant T32ES007266 and the University of Kentucky College of Medicine Fellowship for Excellence in Graduate Research.