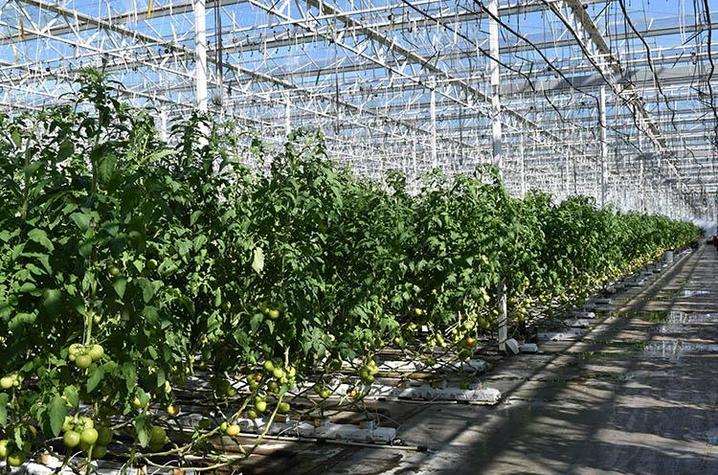 Because of controlled environment systems like this one in the Netherlands, that country is the second largest exporter of agricultural products in the world. Photo by Garrett Owen.

LEXINGTON, Ky. (May 14, 2021) — It is estimated that by 2050 10 billion people will inhabit the earth. To feed that number under the present field-based systems of agriculture would mean clearing most of the planet’s forests, which would have a devastating ripple effect on the environment. Kentucky, though, stands on the cusp of being able to produce a considerable amount of food through controlled environment systems that are eco-friendly and sustainable.

In keeping with its land-grant mission, the University of Kentucky College of Agriculture, Food and Environment is uniquely positioned to provide the research, outreach and instructional infrastructure to support the burgeoning controlled environment industry in the state. To that end, Robert Houtz, associate dean for research and director of the Kentucky Agricultural Experiment Station, will lead efforts related to controlled agriculture research, commercialization, production and workforce preparedness. The effort will meld the expertise of scientists and educators from a variety of departments within the college and potentially across the university.

“We are excited to support new horticultural enterprises in Kentucky which could be transformational in controlled environment production of food, feed and pharmaceuticals,” said Dean Nancy Cox. “This enterprise has the potential for transforming Kentucky into a leader in CE production, research and technology.”

Currently three large-scale horticulture companies have set up shop in Kentucky. ColorPoint, established in Paris in 2001 as a producer of bedding plants, recently merged with AgTech Scientific and switched their operation over to hemp production for pharmaceutical and feed use. Kentucky Fresh Harvest began operations in Stanford in 2016 with a “vision for a healthier, more sustainable and equitable world.” AppHarvest, with a facility in Morehead and two more under construction in Berea and Richmond, says they are “on a mission to feed the future from the heart of Appalachia” and do it sustainably.

“This new era of controlled environments has the advantages of very large increases in production per square foot compared to outside, conventional soil production — up to 30 times more in a lot of cases. Besides sustainability, they also have the advantage of an increase in food security, because these are contained systems,” Houtz said.

Kentucky’s success in this field will require developing a controlled environment horticulture system similar to that in the Netherlands, which has enabled that tiny country to be the world’s second largest exporter of agricultural products, despite having a land mass similar in size to Eastern Kentucky. One of the reasons for the Dutch success is what they call the triple helix, a collaborative effort between academia, government and industry.

“Folks are chomping at the bit to get something started research-wise. That’s our expertise,” Houtz said. “Just because you know what you’re doing right now doesn’t mean that’s the best thing you can do in the future. And you won’t find out what it is unless you do the experiments.”

While the idea of controlled environment production can often bring to mind big companies focused on volume, it also includes smaller producers looking for a way to extend their season or add an additional crop or two throughout the year. The UK team believes the research and educational opportunities will achieve a trickle-down effect for smaller growers.

“In the Netherlands you see small-scale growers using greenhouse technology. It’s not just big companies that use it. Because the industry is so entrenched in that country, the supplies are readily available, the technology and the people who know it are readily available,” said Mark Williams, chair of the UK Department of Horticulture. “If this just benefits a couple of big farms, I think that’s a mistake. I’m hoping that there can be a trickle down, where these technologies can be modified and used by people doing five acres of production, or the 10-acre vegetable grower who wants to put in a greenhouse. That’s the hope. There are plenty of places that have controlled environment production in Kentucky that could benefit from what we learn.”

Collaborating with Kentucky companies as well as building relationships with universities in the Netherlands provides an opportunity for UK students to learn about controlled environment production. Garrett Owen, a new faculty member in the UK Department of Horticulture, is an expert in the field of controlled environments. Owen is creating new classes and expanding research opportunities for undergraduate and graduate students.

“I am interested in looking at methods for growing alternative horticultural crops, so growers of all sizes can diversify by growing cucumbers, melons, carrots, radishes and onions for example,” Owen said.

He is the liaison between UK and universities in the Netherlands, which will provide exchange opportunities for both students and faculty, as well as internship opportunities.

“This is a very exciting opportunity to share experiences with students, to give them that hands-on experience outside the classroom. The goal is to do a 10-day study abroad trip exposing students to the Dutch controlled environment ecosystem and then offer students the opportunity to perform a six-month to a yearlong exchange program with HAS or Fontys universities. This adds another layer to what we can do here at UK that a lot of my other colleagues (at other schools) aren’t doing. And this prepares our students to be more competitive among the CE industry,” he said.

Houtz said there will be research, outreach and student opportunities in other departments in the college besides horticulture, because controlled environment production, like field production, relies on a variety of disciplines to be successful.

Currently, Williams is co-leading a project with Burton Webb, president of the University of Pikeville, to do an economic analysis of workforce and resource potential for controlled environment production systems in Kentucky. The study is funded by the Kentucky Agriculture Development Fund. The two Kentucky schools are working on the study with colleagues at Wagingengen University, Netherlands.

Williams believes that by collaborating with other universities and industry, with support from government funding, Kentucky would be on par with other areas of the country where horticultural crops are grown.

“We could be the center or the leading state for controlled environment production,” he said. “I find this to be unprecedented in my 20-year career here at UK, to see something like this come along.”