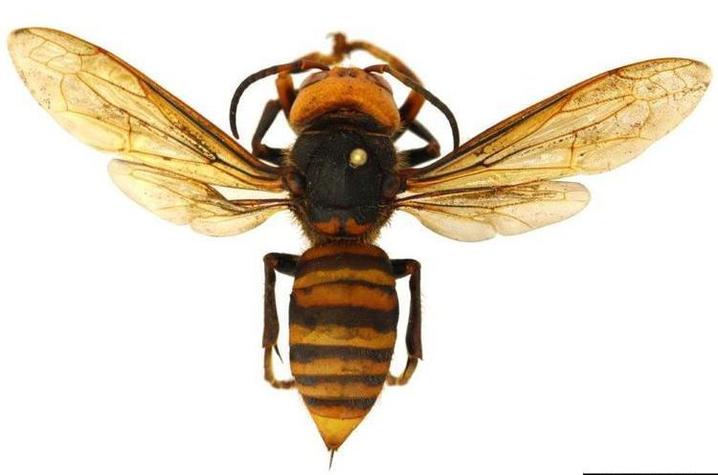 LEXINGTON, Ky. (May 7, 2020) — The first known appearances of the Asian giant hornet, also known as the “murder hornet,” has many Americans concerned. A University of Kentucky entomologist is offering some information to educate Kentuckians about the worrisome insect.

As its name would suggest, the hornet is a native of Asia but was recently found in Washington state and British Columbia, Canada. Due to its size and the power of its venom, it is the most dangerous hornet in the world. Honeybees are their most common prey but their stings can be dangerous and even lethal to humans who are allergic to other types of bee and wasp stings.

“It is unlikely the insect is in Kentucky,” said Jonathan Larson, UK entomologist in the College of Agriculture, Food and Environment. “So far, there have been no findings in North America outside of the Pacific Northwest, but we do have some similar looking insects in Kentucky that could cause people to think they have seen one.”

Asian giant hornets are 1.5 to 2 inches long. They have black and yellow-orange stripes and a large orange or yellow head with prominent eyes. They form large colonies on the ground. Common insects in Kentucky that are similar in size to the hornet include the European hornet, cicada killer and bald-faced hornet. However, Larson said these insects have distinct features that can help Kentuckians differentiate them from the Asian giant hornet.

“The European hornet is more of a red-orange color, and the cicada killer will have a smaller head and different shape than the Asian giant hornet,” he said. “Bald-faced hornets are black and white instead of yellow-orange.”

While it is unlikely the hornet is in Kentucky, UK entomologists encourage anyone who has a specimen that they think might be the Asian giant hornet to submit pictures through a direct message on the Kentucky Bugs Facebook page or email pictures to jonathan.larson@uky.edu. Pictures should include top and side views of the insect and a size comparison to help the entomologists positively identify the insect.

Officials in the Pacific Northwest are working to eradicate the Asian giant hornet from the area.