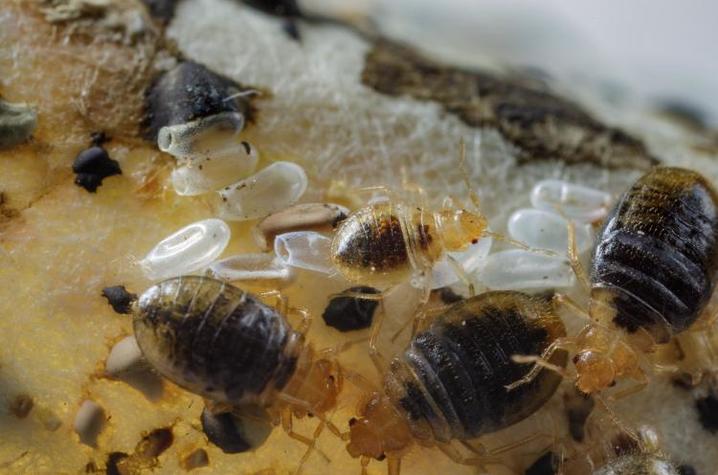 Bed bugs only feed on their hosts for a short time before moving away to hide until it is time for their next meal. UK entomologists have found this behavior is due to triglycerides on human skin that repel the bugs. Photo by Matt Barton.

“We already knew that human body odors, carbon dioxide and warmth attract bed bugs to feed on people. Our latest research shows the reason they do not stay on humans like other pests, such as lice, is due to lipids or triglycerides in our skin that cause them to leave their hosts and hide in nearby locations, such as beds and mattresses,” said Zach DeVries, assistant professor of urban entomology with the UK College of Agriculture, Food and Environment.

DeVries and Sudip Gaire, UK postdoctoral scholar, tested this latest finding by rubbing a strip of filter paper on participants’ skin to collect samples. Research participants represented numerous ages and ethnicities. They also tested the theory on multiple populations of bed bugs raised in the lab and collected in the field.

“Our findings were consistent across all triglyceride types, all participant groups and all bed bug populations,” DeVries said. “Bed bugs nearly always preferred the control filter strip to the one containing skin triglycerides.”

“The bed bugs do not like to sit on skin triglycerides and refuse to stay on surfaces that contain triglycerides,” Gaire said. “We got tremendous results by using only a small amount of triglycerides.”

While further research is needed to explore why bed bugs do not like the triglycerides and if there are other potential bed bug repellents in human skin, DeVries and Gaire think this could be an important beginning to more effective bed bug control.

“There may be several potential management opportunities from our finding,” DeVries said. “It’s possible that our findings could be used to deter bed bugs from hitchhiking on people’s belongings, thus reducing their spread.”

The findings were first reported in Scientific Reports. The full research paper is available online at www.nature.com/articles/s41598-021-01981-1.

Additional researchers in the study include Russell Mick, Richard Santangelo and Coby Schal from North Carolina State University, and Grazia Bottillo and Emanuela Camera from the San Gallicano Dermatological Institute in Rome, Italy.

Research reported in this publication was supported by the U.S. Department of Housing and Urban Development as part of an award KYHHU0061-20 totaling $400,000, 100% of which was funded by HUD.