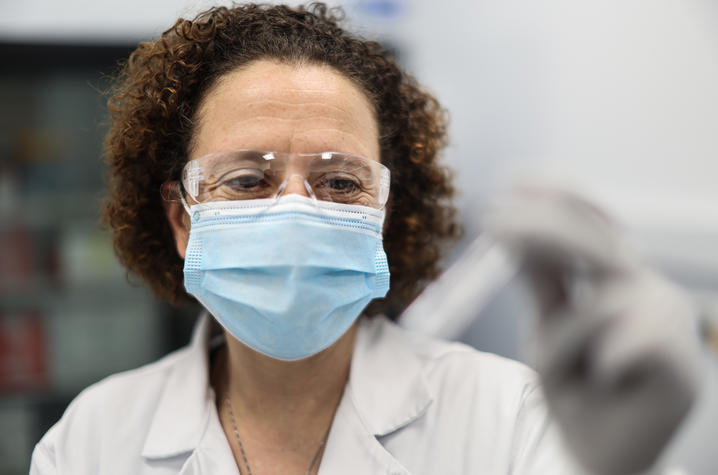 LEXINGTON, Ky. (May 10, 2022) — Ilhem Messaoudi, Ph.D., chair of the University of Kentucky College of Medicine’s Department of Microbiology, Immunology, and Molecular Genetics, is one of several UK experts who have been on the front lines of COVID-19 research throughout the pandemic.

As a virologist and immunologist, Messaoudi’s research focuses on better understanding viruses and the wide range of factors affecting the immune system. She recently sat down with UKNow to give us the latest on SARS-CoV-2 – including what we know about the latest Omicron variants and what we might expect in the future.

UKNow: What is the latest when it comes to COVID-19 variants?

Although we are seeing the emergence of new Omicron subvariants (BA.2 sub-lineages and BA.2.BA.4 and BA.5) cases slightly on the rise, there is also no evidence that this new variant is causing disease that's more severe and we are not seeing an increase in hospitalizations, so that's all good news.

And even this new recombinant, XE, is very interesting. Recombination occurs when genetic material from two different variants are combined into one virus, which is something that happens very often in influenza, but is unusual in coronaviruses. Still, there is no evidence that this new recombinant will pose any more risk than any of the current variants that have been in circulation.

UKNow: While recent variants like Omicron have been more transmissible, they have been less harmful than the original strain of SARS-CoV-2. Do you think this trend will continue?

It's really hard to predict what's going to happen, but I definitely would caution against stating that the new variants are more harmful. We are seeing fewer hospitalizations because of vaccination and natural immunity but breakthrough infections (those in vaccinated individuals) continue to occur especially in older and immune-compromised individuals.

It’s unclear how many more variants we will see. I'm not sure how many more mutations this virus can undergo before it starts to lose fitness. As the virus gets better at infecting and replicating in human cells, it's going to be more transmissible. But at the same time, it may lose some of the attributes that make it cause severe disease.

If you think about it, it is in the virus’ best interest to adapt to its host and not kill it, because then it has a higher chance of being transmitted and spreading across the population.

It's almost impossible to eradicate a virus, especially one like SARS-CoV-2 that can replicate in multiple reservoirs and infect other animal species. The goal of the vaccine is not to eradicate the virus, it is to arm the immune system to respond quickly before the virus can replicate to high enough levels to cause severe disease and organ damage. The vaccine helps ensure that when we do get infected, we don’t end up in the hospital or die.

UKNow: We’ve been hearing a lot about how we are in the endemic phase of the pandemic. What does that mean?

An endemic pathogen is something that we will continue to live with. A good example of that is H1N1: when it emerged in 2009, it caused a pandemic. Today, H1N1 is endemic because it’s now in circulation and we account for it in seasonal influenza vaccines. Again, because of the fact that SARS-CoV-2 can replicate in and infect other animal species, we expect that it will be with us for the foreseeable future.

UKNow: Does that mean it could become a seasonal respiratory virus?

Not necessarily. The reason why influenza is a seasonal virus is actually related to the migratory patterns of birds. Birds are the reservoir for influenza, so the disease moves as they migrate from the different hemispheres at specific times of the year. Following the birds is how scientists track influenza and predict what strains will be circulating each year.

SARS-CoV-2 can infect different animal reservoirs that live alongside people, not just migratory animals, so it won’t necessarily be seasonal like influenza. However, when the weather becomes colder and people are more likely to gather indoors, it is likely that we will see spikes in cases

UKNow: Do you think there will be variant-specific booster shots in the future?

Again, I think the virus is reaching an equilibrium where potentially more mutations will make it less fit. However, after things stabilize, we may reach a point where there could be one variant every year that scientists could plan for and predict. In that case, we may consider making a new vaccine that's more tailored to whatever is in circulation at that point.

UKNow: As a researcher, what do you think are some of the crucial things we now know about COVID-19 that we didn’t two years ago?

Early on, researchers did have some knowledge about SARS-CoV-2 based on what we already knew about other coronaviruses. But looking back at March 2020, we knew nothing about it compared to what we know today.

One of the biggest mysteries was why certain people got severe disease and others didn't. We now know that excessive inflammation stops an appropriate immune response from taking place and wreaks havoc on the organ systems. So in addition to antivirals, anti-inflammatories like dexamethasone have become a standard of care. Today, we have many more tools in our toolbox to prevent people from ending up in the ICU and dying.

Also, mRNA technology was in the background before COVID-19. Now people are investing in it and are talking about using it for many other viruses including HIV. mRNA vaccines have energized the field of vaccinology in a tremendous way.

Because we’ve diverted so many resources into understanding this one pathogen, we also understand so much more about the immune system, especially lung immunology, differences between the upper and lower respiratory tracts, and how age and metabolic disease disrupt immunity. I think we now hopefully have a better roadmap to address any new outbreaks if they occur.