LEXINGTON, Ky. (Jan. 2, 2020) — More than 70,000 Kentuckians are living with Alzheimer's disease, which likely means that you know someone whose life has been touched — directly or indirectly — by dementia. And since that number is expected to rise to more than 85,000 in the next five years or so, Alzheimer's will likely hit closer to home for many of us.

But the Sanders-Brown Center on Aging at the University of Kentucky is doggedly pursuing answers to unlock the "how" and "why" dementia occurs with the goal of a treatment by 2050. They are world leaders in dementia research, and research funding for Sanders-Brown has almost tripled in the past five years.

At UK's men's basketball game versus the University of Louisville on Dec. 28, UK Sanders-Brown Center on Aging Director Linda Van Eldik and researchers Pete Nelson, Donna Wilcock and Steve Scheff were recognized on the Rupp Arena floor representing the team of nearly 100 faculty and staff affiliated with the center. Joining them were Laurie Davies and Sue Scheff.

For more information about the Sanders-Brown Center on Aging, go to https://www.uky.edu/coa/adc. 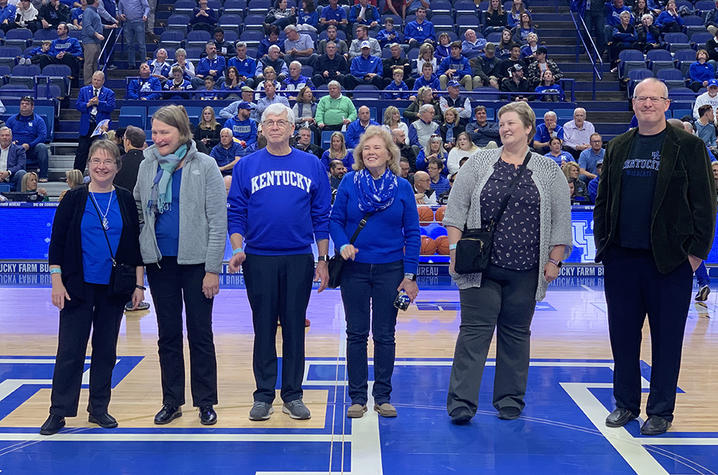