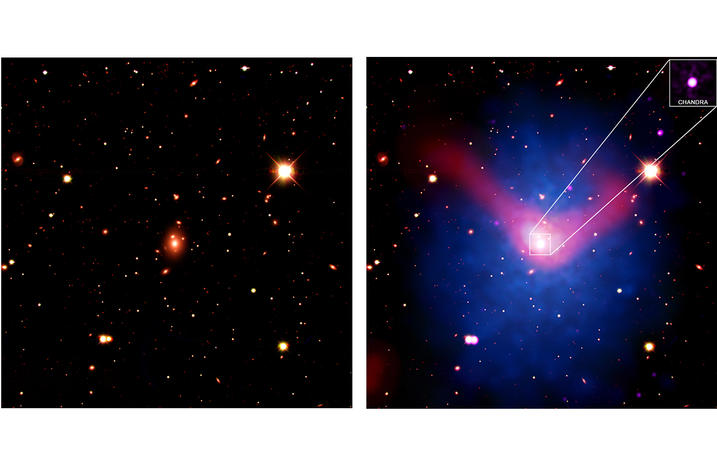 LEXINGTON, Ky. (July 12, 2021) — An international team of researchers have discovered a galaxy cluster acting like a passenger on what astronomers are calling an "intergalactic highway."

The cluster is known as the "Northern Clump" and is located about 690 million light years from Earth. Previously, scientists discovered an enormous filament, a thin strip of very hot gas, that stretched for at least 50 million light years. This new study found evidence that the Northern Clump is traveling along this filament, similar to how a car moves along the interstate.

A variety of telescopic images allowed the researchers to observe the galaxy cluster and its movement. Yuanyuan Su, an assistant professor in the University of Kentucky Department of Physics and Astronomy, is one of the lead researchers on the project and led the analysis of the X-ray observation taken by the Chandra X-ray Observatory.

The Chandra telescope has an unprecedented spatial resolution among X-ray telescopes, which reveals a sharp contact edge towards south as the cluster travels through the cosmic filaments.

"In theory and simulations, massive objects in the universe are predicted to grow through the accretion of substructures along the filament of dark matter. It is exciting that such an event is caught in action thanks to the joint observations of X-ray, optical and radio telescopes," Su said. "More discoveries like this are expected over the next few years, particularly with eROSITA, a newly launched survey observatory aiming to provide the deepest view of the X-ray sky."

Previous observations from eROSITA have shown that the Northern Clump and a pair of galaxy clusters to the south all lie along an enormous filament of gas. The Northern Clump is moving toward the other clusters and all three will eventually merge with each other.

Led by Angie Veronica of the University of Bonn in Germany, the results were presented at the recent European Astronomical Society meeting. UK's Su served as second author on the paper, which is available online.

Read more about the project at https://chandra.si.edu/photo/2021/nclump/.