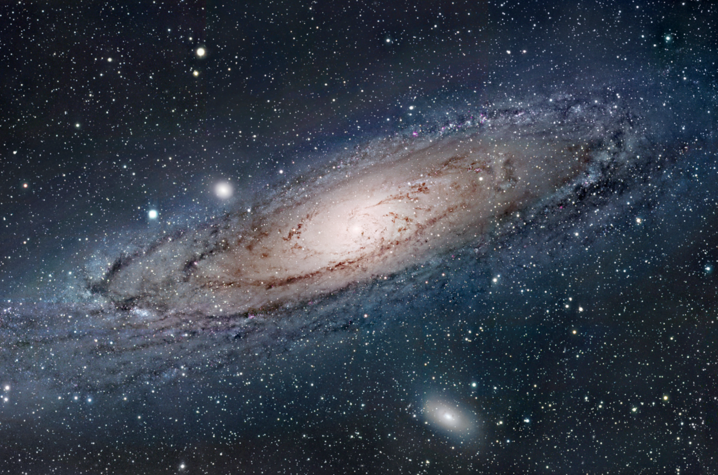 LEXINGTON, Ky. (July 17, 2017) — A team from the University of Kentucky’s Department of Physics and Astronomy has observed evidence of ancient impacts that are thought to have shaped and structured our Milky Way galaxy.

Deborah Ferguson, a 2016 UK graduate, is the lead author on a paper that published this week in the Astrophysical Journal (ApJ). Ferguson conducted the research as an undergraduate student with co-authors Susan Gardner, a professor of physics and astronomy in the UK College of Arts and Sciences, and Brian Yanny, a staff scientist and astrophysicist in the Fermilab Center for Particle Astrophysics.

Their paper, "Milky Way Tomography with K and M Dwarf Stars: the Vertical Structure of the Galactic Disk," presents observational evidence of asymmetric ripples in the stellar disk of our galaxy, which had long been thought to be smooth. Using observations from the Sloan Digital Sky Survey (SDSS) telescope in New Mexico, Ferguson, Gardner and Yanny analyzed the spatial distribution of 3.6 million stars and found ripples that confirm previous work of the senior co-authors. These results can be interpreted as evidence of the Milky Way’s ancient impacts, which could include an impact with the massive Sagittarius dwarf galaxy some 0.85 billion years ago.

"These impacts are thought to have been the 'architects' of the Milky Way's central bar and spiral arms," Gardner said. "Just as the ripples on the surface of a smooth lake suggest the passing of a distant speed boat, we search for departures from the symmetries we would expect in the distributions of the stars to find evidence of ancient impacts. We have found extensive evidence for the breaking of all these symmetries and thus build the case for the role of ancient impacts in forming the structure of our Milky Way."

This new paper continues Gardner’s earlier studies with Yanny and others of the breaking of north/south symmetry in the stellar disk of the Milky Way. Their earlier work revealed an asymmetry that appears as a vertical "ripple" in the number counts of the stars as one samples in vertical distance away from the center of the galactic disk. In the new paper, the team analyzed the largest sample yet, and confirmed their earlier interpretation of the north/south asymmetry and found evidence for symmetry breaking in the plane of the galactic disk as well.

"Having access to millions of stars from the SDSS allowed us to study galactic structure in an entirely new way by breaking the sky up into smaller regions without loss of statistics," said Ferguson, who first reproduced the vertical asymmetry results Gardner and Yanny found in their earlier analysis. "It has been incredible watching this project evolve and the results emerge as we plotted the stellar densities and saw intriguing patterns across the footprint. As more studies are being done in this field, I am excited to see what we can learn about the structure of our galaxy and the forces that helped to shape it."

Ferguson graduated from UK last year with a degree in physics. This ApJ paper evolved from her senior thesis, on which she worked with Gardner. She has now completed her first year of graduate school at the Georgia Institute of Technology where she received a fellowship to pursue a doctorate in physics.

While at UK, she received a Singletary Scholarship and a UK Summer Research Grant to work on this project, and presented at the UK Showcase of Undergraduate Scholars.

"I am so fortunate to have had not only the opportunity to do undergraduate research, but to work on a project that ultimately led to being published," Ferguson said. "It is very motivating to have spent most of my undergraduate career working on a research project because it makes it clear how useful and important physics is. While taking classes, I was able to see first hand how it was applied in research. I learned to program during my freshman year of high school at Paul Laurence Dunbar in Lexington, and it has been great to apply those skills to analyze such a large, real-world data set."

The authors acknowledge partial support from the Office of Science of the U.S. Department of Energy.