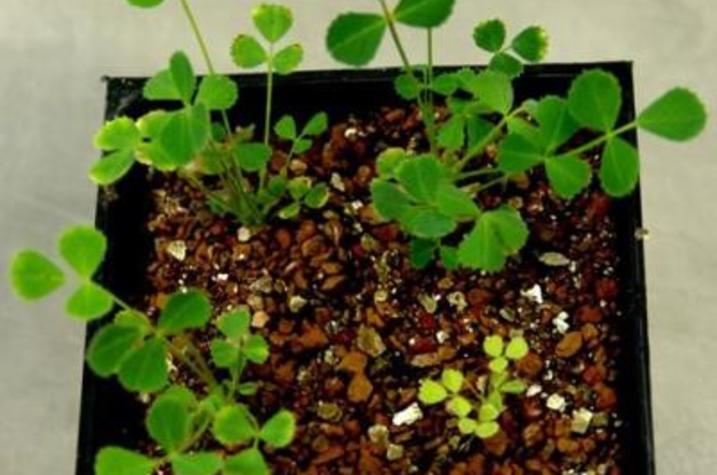 LEXINGTON, Ky. (June 19, 2017) — A group of University of Kentucky scientists have discovered a more efficient way for legumes to fix nitrogen.

Legumes have long been known for their nitrogen-fixing properties. Through a symbiotic relationship with rhizobia, which are soil bacteria, legumes can provide their own nitrogen needs and leave nitrogen in the soil for other plants to use. This reduces the need for nitrogen fertilizers, which are costly and can cause environmental pollution. But legumes differ significantly in their nitrogen fixation efficiency, and will act differently in different environments and with different bacterial strains, sometimes fixing little to no nitrogen.

Hongyan Zhu, a professor in the UK College of Agriculture, Food and Environment, and his team of researchers found two antimicrobial peptides in the model legume Medicago truncatula that kill certain rhizobial bacteria as the nitrogen fixation process begins. This model legume is closely related to the forage legume alfalfa.

“This finding offers scientists a strategy to improve nitrogen fixation in legumes by selecting or manipulating these genes to accept more bacteria,” Zhu said. “This could potentially allow legumes to fix more nitrogen.”

Zhu believes the original function of these antibacterial genes was to kill bacteria as they entered the plant, but they have evolved to manipulate certain bacteria to start the nitrogen fixation process. Bacteria that do not tolerate the peptides die almost immediately.

In addition to the UK researchers, scientists from Brigham Young University, University of Massachusetts, Cornell University and collaborators from Hungary and the Netherlands contributed to the study.

He received funding from the U.S. Department of Agriculture's National Institute of Food and Agriculture and from Kentucky Science and Engineering Foundation for this study. Zhu will continue to study more efficient ways legumes can fix nitrogen.