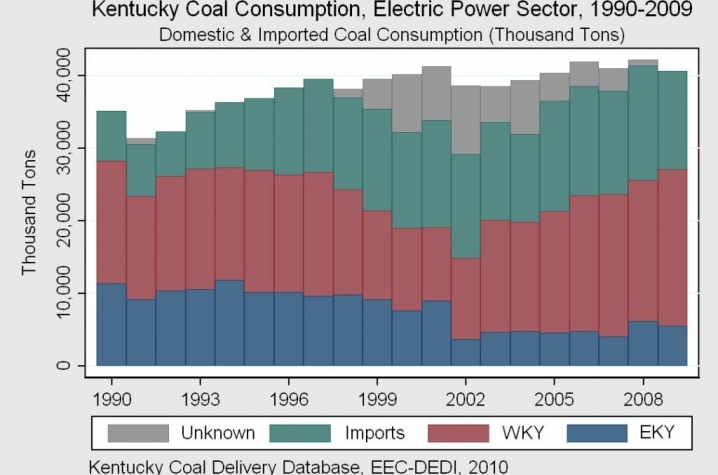 LEXINGTON, Ky. (March 7, 2011) — Kentucky Department for Energy Development and Independence (DEDI) policy analysts Aron Patrick and Alan Waddell were working intensely to complete the department's first edition of the Kentucky Energy Profile in mid-2010, when they encountered a problem of powerful proportion.

DEDI has specific interest in these shipments, as they relate to the movement of Kentucky coal and electric-generating facilities in Kentucky.

"The data spanned at least 10 years and included over one million individual shipments of coal, delivered all across the country," explained Waddell. "Frankly, there were data gaps and shifts in information, which provided challenges to accurate analysis."

Waddell and Patrick collected and processed all of the national data, carving out the information that reflected Kentucky's involvement, but they still found problems. "The sheer volume of information was intimidating," said Waddell. "So, I figured that we could use some help."

Basically, Patrick and Waddell needed a statistical model to predict coal shipment origins and characteristics in circumstances where that information wasn't available.

"The origin of coal ultimately affects its destination," said Waddell. “And in Kentucky, the identification of Eastern Kentucky coal versus Western Kentucky Coal is essential.” Without dependable data, this important piece of Kentucky’s first energy profile would have been inaccurate.

The policy analysts recalled their days at the University of Kentucky, specifically their time with statistics professor Arne Bathke during their tenure as students in the Patterson School of Diplomacy and International Commerce.

"I knew just who to call," laughed Patrick. "UK has the expertise that we just don’t have access to."

One of Bathke's statistics classes had used DEDI data that spring, employing linear models and regression techniques to model Kentucky electricity rates. Bathke and his colleagues in statistics were ready for a new project and ready to further the relationship with Patrick and his team.

"There are benefits to both the state and UK in this relationship," said Bathke. "Students get real data, feedback from professionals and they are motivated, because they've learned something useful. The state gets free and unbiased analyses and results, and students become interested in issues concerning the Commonwealth."

UK statistics professor Patrick Breheny took DEDI's charge this past fall with his second year graduate students, and his students were capable of overcoming Patrick's data issues, after receiving a sample set of shipment receipts to analyze.

"Each student developed his or her own model," said Breheny, who withheld portions of the data so that the accuracy of the students' models could be tested. "The best models were able to predict the origins of coal shipments with 99% accuracy."

Breheny said that students became excited at the possibility of measuring something real and solving an actual problem. Most data sets come from stats textbooks.

"This is their first exposure to real people and real benefits," added Bathke.

"The Commonwealth is now able to more precisely quantify the production, consumption and trade of Kentucky coal both within Kentucky and across the United States," said DEDI Deputy Commissioner John Davies in a letter to Bathke and Breheny.

”We were thrilled that they were willing to roll up their sleeves and volunteer,” Patrick said. “By working with a group of students, we see that there are many different ways to solve a problem and our Department learns more from this.”

But Bathke and Breheny admit that the benefit is on both sides.

"It was great for our students to see the power of what they do," said Bathke. "This builds self-confidence in their skills."

Of all of the participants in Breheny's class, graduate students Shaoceng Wei and Yang Luo built the two most reliable statistical models for the DEDI, and Patrick will incorporate these models in all future analytical efforts. Both students are pursuing internships for the coming summer as well.

The Kentucky Energy Profile came out last week, marking the first time the state has had a public record of energy use and production.

"Here we have a great example of a direct connection between our state government and young, motivated, smart people who are eager to prove themselves," said Bathke. "Our expertise is being put to good use."