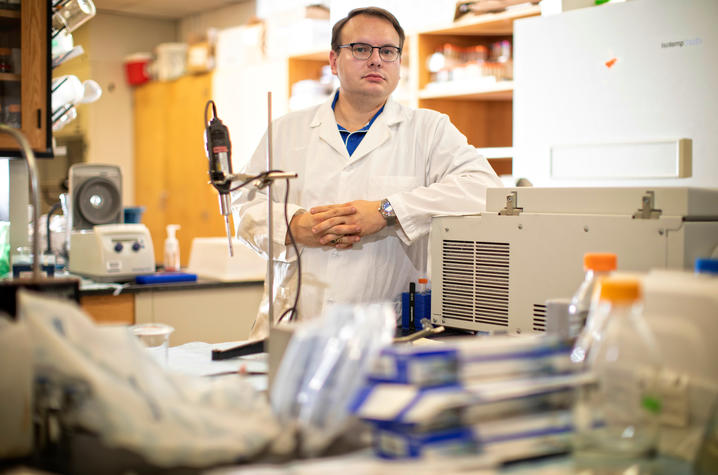 Stuart Lichtenberg, pictured in his lab at the Agriculture Science Center North, will graduate Dec. 20 with a Ph.D. in integrated plant and soil science. Mark Cornelison | UK Photo.

LEXINGTON, Ky. (Dec. 12, 2019) — If you had told Stuart Lichtenberg in 2002 that he would eventually graduate from the University of Kentucky with both a bachelor’s degree and a Ph.D., he probably wouldn’t have believed you.

Growing up in Morehead, Kentucky, he identified UK as a place where he and his father made memories together.

“I remember distinctly being about 7 years old and waiting on the corner of Maxwell and Rose Street right where the ginkgo trees stand to get into Memorial Coliseum. My dad took me out of school early so that we could come down here and go to what was then called ‘Midnight Madness.’ I’ve been affiliated with UK in one way or another my entire life,” Lichtenberg said.

As he grew older and started looking into colleges, Lichtenberg knew he belonged at UK.

“It’s pretty well known that UK is the best school in the state. It’s just a fact. Nobody else even comes close,” he said.

After multiple semesters, Lichtenberg became overwhelmed with not knowing what he wanted to do to with the rest of his life.

“There were many reasons that I failed out of college the first time, but among the forefront of them was that I was unable to find any specific, singular subject I was passionate about. I had many interests across many fields, and I always felt like the jack-of-all-trades and the master of none,” said Lichtenberg.

After leaving UK the first time, Lichtenberg experimented with other opportunities, spending time working in retail, at a hospital and various other jobs across multiple states. Those years helped motivate him to return to school, determined to find his niche this time around.

He began taking several evening and early morning classes to fit them in before and after work.

“Balancing a full-time job, while also going to class while dealing with homework and outside of class commitments was very tough at first. My first year back was exhausting. But I always kept in the back of my head that I knew if I could get through this year, I’d be fine. I knew it would be the hardest part. It ended up being the most difficult thing, but I used that as a motivator,” Lichtenberg said.

The first time around, he hadn’t even heard of “agricultural biotechnology,” but once he learned about the field, he was hooked.

“I was sifting through the course catalog looking for something that interested me. I was flipping through from the beginning and under the A's in the College of Agriculture, Food and Environment I looked at this ‘Agricultural Biotechnology.’ I had never heard of it before, but I looked at the course list, and it was as if this thing was made for me,” he continued.

The alphabet may have guided Lichtenberg to the major, but the requirements for the program sealed the deal.

“I saw that there was a mandatory research component, which was a big deal for them and myself. The agricultural biotechnology program emphasizes the independent research project. So, I signed up. It was one of the best decisions I have ever made. Accidentally but surreptitiously,” said Lichtenberg.

His interest in and passion for agricultural biotechnology was supported by many faculty members and mentors, particularly Olga Tsyusko and Jason Unrine.

“I ended up taking a course from Olga Tsyusko, and from there I got involved with her and Jason Unrine's labs as an undergraduate assistant,” Lichtenberg explained.

Lichtenberg’s drive to complete his degree was met with a series of encouraging and supportive mentors who helped him make it to the finish line.

“In the agricultural biotechnology undergraduate program, you are appointed a faculty advisor immediately. You have that same faculty member your four years, and they usually end up teaching a course you take. Because the program is housed in multiple departments, all these professors are involved because they want to be, because they are passionate about the program and about the students. That really added a layer of investment that you don’t always get,” Lichtenberg said.

His mentors never tried to box in his creativity or interests, pushing him to try different things.

“They never encouraged me to focus on one thing, inside or outside of the lab. There was never any pushback. I had freedom to explore anything I wanted. That was key for me and it’s helped me as a scientist. Barriers are artificial — don’t let them develop in your mind,” he said.

Lichtenberg is also grateful for the support from his wife, Anne.

“None of this would have been possible without her support. We were dating at the time that I started back, and she always encouraged me to continue my work. Without her I probably wouldn’t be here today,” said Lichtenberg.

After earning his bachelor’s degree in agricultural biotechnology in 2015, he defied statistics and returned to UK to continue his studies.

“By the time I had graduated, I knew that I wanted to continue my education by pursuing a Ph.D., and the opportunity came available to work with Unrine on a project involving environmental toxicology and nanotechnology, specifically studying next generation pesticides,” Lichtenberg said.

This opened the door for his next adventure. Lichtenberg has accepted a post-doctoral position at the University of Wisconsin-Madison where he will be studying and tracking chronic wasting disease (CWD). His work will build upon the experience gained in both his undergraduate and Ph.D. programs at UK. Lichtenberg, his wife and family will make the move at the start of the new year.

Reaching out to faculty members and mentors made all the difference during Lichtenberg’s time at UK. He urges students to take advantage of time faculty and staff set aside for students.

“If you find faculty and staff that are interested in helping students, do not be afraid to ask them for help. I probably could’ve saved myself a bit of struggle if I had taken the time to reach out to them,” said Lichtenberg.

After initially launching his college career at the University of Kentucky in the fall of 2002, Stuart Lichtenberg will graduate with a Ph.D. in integrated plant and soil science from the Department of Plant and Soil Sciences in the College of Agriculture, Food and Environment and will participate in Commencement Ceremonies Friday, Dec. 20, at Rupp Arena.

On reflection of his time at UK, Lichtenberg recognizes the symbolism of this life achievement, and the potential impact that he and his colleagues possess.

“I’ve known some of the best and brightest people here, and countless of them have gone on to do great things for the state of Kentucky, the country, and the world. We do a lot of spectacular work here that you may not always hear about, but I fully believe anybody who has an education from this university can do spectacular things,” he said.