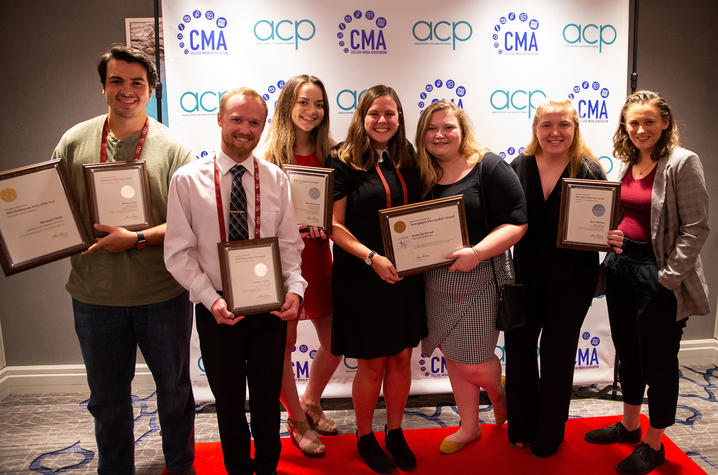 LEXINGTON, Ky. (Nov. 6, 2019) — Founded in 1908 and independent since 1972, the Kentucky Kernel is the nonprofit, student-run newspaper for the University of Kentucky. The Kernel was recently awarded the 2019 Pacemaker Award for having one of the best student newspapers in the country. The award ceremony took place at the College Media Association and Associated Collegiate Press convention Nov. 2 in Washington, D.C.

“Hearing our name called as a Pacemaker winner was so exciting," said Bailey Vandiver, 2018-19 editor-in-chief for the Kernel, the academic year for which the paper was judged. “While winning awards is not our primary goal as student journalists, it’s always great to get this kind of recognition because it means we’re doing the kind of really good journalism that we aim to do.”

Each year, the National Scholastic Press Association presents scholastic journalism’s preeminent award, the Pacemaker. There is a category for each type of publication — online, newspaper, yearbook, magazine and broadcast. Entries are judged by teams of professionals based on the following criteria: coverage and content, quality of writing and reporting, leadership, design, photography and graphics.

Last September the Kernel was named one of 46 finalists, out of the 160 college newspapers that entered the competition. This past week, they were named one of the 19 award winners — giving them their first Pacemaker win since 2016.

“I think winning this award goes to show what we’ve already known: That we have one of the best collegiate newsrooms in the country, and we continue to try to strive for excellence each and every day,” said Ryan Craig, the student media advisor for the Kernel.

“Winning this Pacemaker further legitimizes the Kernel’s role as our campus watchdog and voice," said Rick Childress, the 2019-20 editor-in-chief for the Kernel. "We’re working hard to bring home another one next year.”

UK Study Examines Impact of B Cells on Stroke Recovery