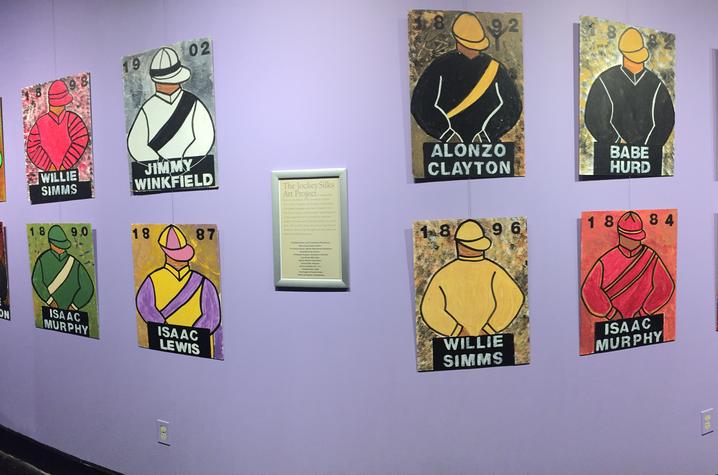 The one-of-a-kind project features students' creative representations of the racing silks worn by the African-American jockeys who won 16 Kentucky Derby races held from 1875 to 1902. Nine of the jockeys depicted were born in Kentucky. They include: Oliver Lewis, William Walker, James Carter, Garret Lewis, Babe Hurd, Isaac Murphy, Erskine Henderson, Isaac Lewis, Alonzo Clayton, James Perkins, Willie Simms and Jimmy Winkfield. Seven of the thoroughbreds they rode were also trained by African Americans. The panels are featured as part of the permanent "Black Horsemen of the Kentucky Turf" exhibit located in the International Museum of the Horse.

LEXengaged, a living and learning community at UK, focuses on civic engagement, social justice and service learning. As a group, the organization explores the common challenges faced by UK and the city of Lexington. LEXengaged is a vibrant community of socially conscious individuals dedicated to using their skills to better society.

LEXengaged has worked with Williams Wells Brown Elementary for the past three years to teach students the rich equine industry history of Lexington. William Wells Brown, in Lexington's east end, sits in the same location as the old Kentucky Association track. The area was home to three-time Kentucky Derby winning jockey, Isaac Murphy. Murphy, a former slave, became one of the most celebrated sports heroes of the late 19th century. He was the first jockey inducted into the National Museum of Racing's Hall of Fame. African Cemetery No. 2, where many African-American horsemen are buried, is also located near the school.

"For too long the contributions that African Americans have made to Kentucky’s premier industry have been overlooked and forgotten. William Wells Brown students learn about the rich history in their own neighborhood. UK students learn, alongside William Wells Brown students, about the horse industry’s history, recognizing the essential role that minorities have always played," Rosie Moosnick, director of LEXengaged, said.

A collage of the panels has been made into a poster that is being sold as part of a fundraiser for the afterschool program (21st Century) at William Wells Brown. For more information on how to purchase a poster, text Moosnick at 859-338-4065.