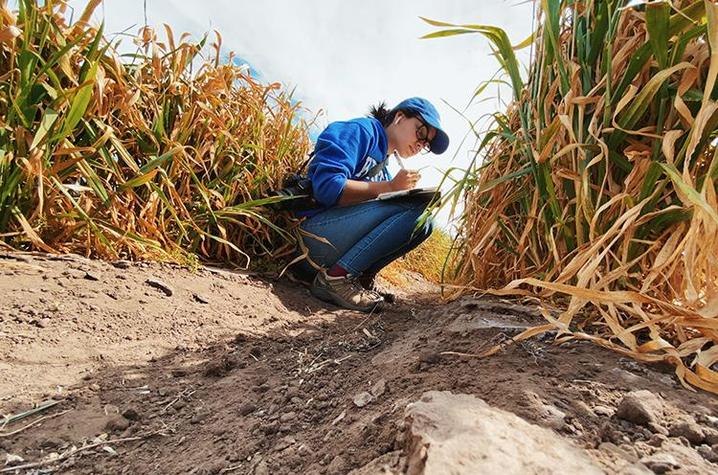 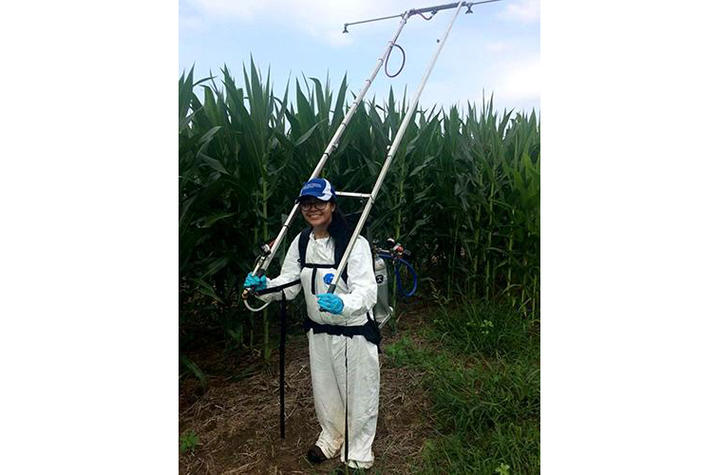 LEXINGTON, Ky. (Sept. 18, 2020) — Growing up, University of Kentucky graduate student Cristina Castellano thought she might like to be a forensic scientist, but her interest in agriculture steered her toward plant pathology, which she terms as “the forensic scientist of the plant world.”

“Plant pathologists and forensic scientists use a lot of the same technologies to find solutions to problems,” said Castellano, a student in the UK College of Agriculture, Food and Environment. “When I got into the extension side of agriculture at UK and started doing a lot of hands-on, applied research, I knew this was what I wanted to do.”

A native of McAllen, Texas, Castellano became acquainted with UK while an undergraduate student at Texas A&M University-Kingsville when she was accepted into the U.S. Department of Agriculture’s summer internship program. The competitive 12-week internship program is offered through the UK Grain and Forage Center of Excellence. It allows undergraduate students attending U.S. universities to gain hands-on research experience in a variety of agriculture disciplines, either at the center in Princeton or on UK’s main campus in Lexington.

“Cristina was one of the interns who stood out that summer, because I could just see how much she wanted to learn. I knew she was likely to go forward in her academics and become a scientist,” said Carrie Knott, director of the UK Research and Education Center and leader of the internship program.

“Cristina is an incredibly dedicated and hard-working student.” Wise said. “Her enthusiasm for learning and conducting research is refreshing and inspiring to see in a student. She also has a passion for extension and is genuinely interested in seeing her research benefit Kentucky corn farmers. We are thrilled that she chose the University of Kentucky and our corn plant pathology program for her graduate degree.”

Castellano got her first opportunity to publicly present her internship research to producers when she shared the results of her project with participants of the UK Corn, Soybean and Tobacco Field Day.

“I gave my first poster presentation during the field day, and it was exciting and nerve-wracking at the same time. But it gave me the experience I needed to take the poster and present it at different research symposiums in Texas,” she said.

After graduating in three years with her bachelor’s degree, Castellano returned to UK and is now working toward her master’s degree under Wise’s guidance. She is studying fungicide sensitivity of the fungus that causes northern corn leaf blight. The disease is caused by a fungal pathogen and begins with lesions on the leaves. If the pathogen strikes the corn during or before tasseling or silking, it can result in significant yield reductions. It is a common disease across the United States. Scientists speculate the disease may be developing a resistance to some fungicides.

As part of the project, Castellano is collecting diseased corn samples from seven states. She will grow spores from the samples in the lab, confirm they are the fungus that causes northern corn leaf blight, and isolate them down to a single spore. Castellano will then test those spores against different fungicide classes in laboratory assays to check for sensitivity to the fungicides’ active ingredients.

“Cristina’s project is important to Kentucky farmers and farmers across the U.S. Many of them use foliar fungicides in corn and, over time, repeated use can make the fungicides less effective against a target population,” Wise said. “Detecting shifts in fungicide sensitivity early can allow farmers to change management tactics and prevent expensive applications of less effective products.”

Castellano hopes to eventually pursue a doctorate and become an extension plant pathologist.